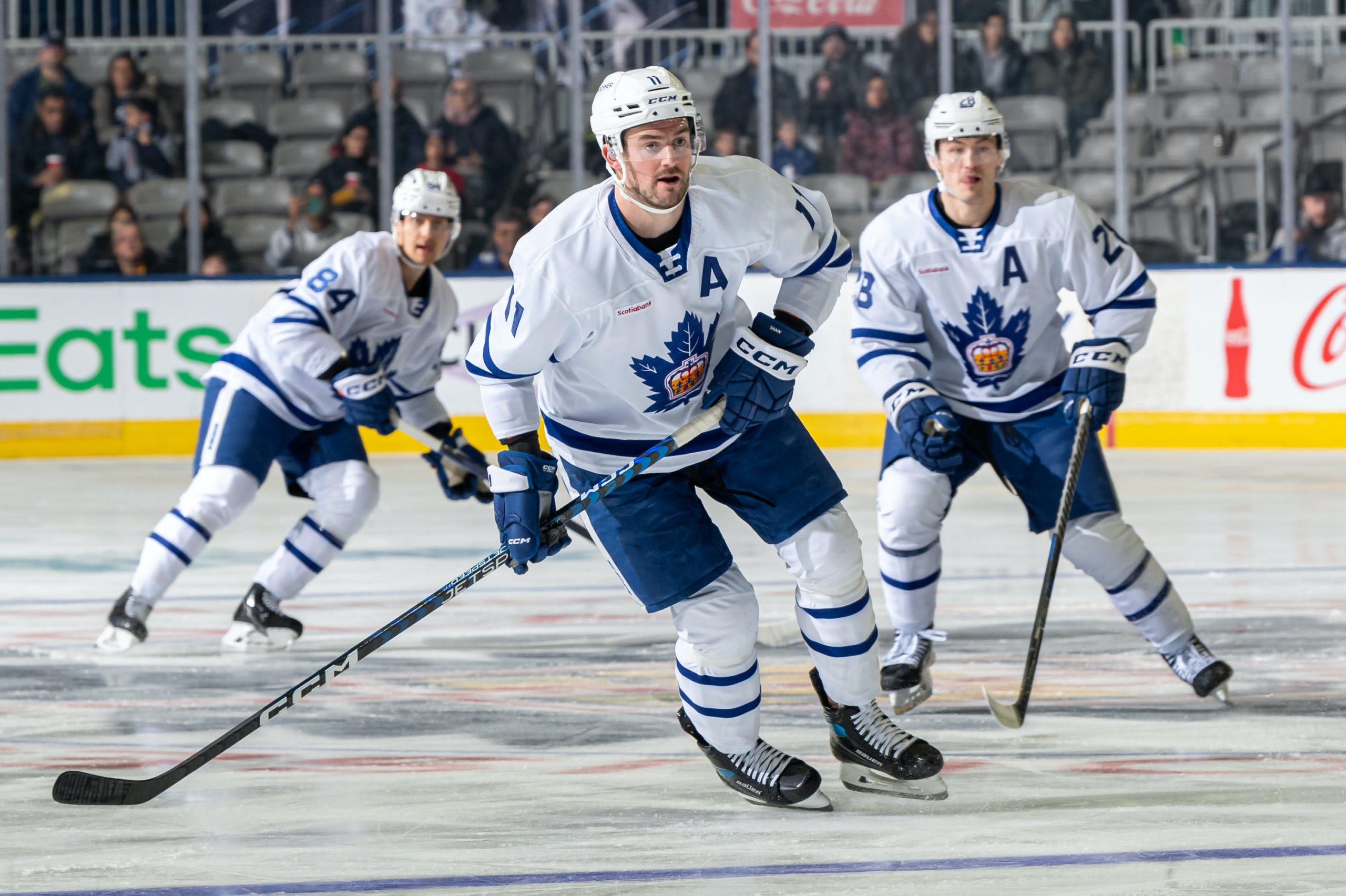 By Nick Barden
1 month ago
The Toronto Marlies have officially named Logan Shaw as their 10th captain in franchise history.
The 30-year-old from Glace Bay, Nova Scotia joined the organization this summer on a three-year contract. In 21 games with the Marlies this season, Shaw has 24 points.
“Every season as a staff, we’re looking, observing how our team comes together,” said Marlies head coach Greg Moore. “From day one, his presence, his relationship building, his communication skills, and what really impresses me about him is his emotional intelligence of knowing what’s needed at the right time, what energy to bring to the group, and to not only demand from himself, but demand of his teammates.”
Before joining the Marlies, Shaw served as the captain of the Belleville Senators. Knowing of that leadership was one of the reasons why Toronto targeted him earlier this summer.
“In the off-season, he was a player that was specifically targeted to bring here for not only his play on the ice, but from what we had heard and done our research on on him as a person,” Moore said. “And when you pair the quality of person and the leadership skills with the play on the ice, we had a sense coming into this year that he might be in our leadership group.”
When the Marlies named Shaw their next captain, they did so in a very particular way. The team invited the 30-year-old’s parents, his wife, and son in for the presentation of the captaincy.
Moore said they even had Shaw’s son wearing a Marlies jersey with the ‘C’ already sewn on. And they even had Rich Clune there to pass off the captaincy to Shaw. An incredible moment.
“He didn’t know that they (his parents) were coming in the morning (on Tuesday) for the presentation,” Moore said. “I spoke, Rich Clune was present to speak after me as the former captain to speak on what it meant to him and to pass it along, and then [Ryan] Hardy spoke, presenting the captaincy, inviting his parents into the room and inviting his wife and kid into the room.”
The Marlies have a special way of making these moments one that people can remember for a long time. It happened when the team named Clune their captain a few seasons back, and it also happened this year when Hardy announced that Keith Petruzzelli was getting an NHL contract.
“It’s always emotional,” Moore said of the captaincy presentation. “A lot of what we do, and why we love what we do, is the human element of being part of a team sport. And when you get to experience and observe somebody who’s such a great human being, who’s doing so much good for the people around him in our organization, to give him that moment, to give him that reward, to give him that validation of everything that he’s put in, and to be able to share that with his family in front of our team family, it was a really special moment.”
“Naming the captain of the Toronto Marlies is as pivotal of a decision as we will make this season and we’re incredibly proud to have Logan serve in this role,” said Marlies GM Ryan Hardy in a statement. “We’ve selected an individual whose impact on our lineup and in our dressing room this season has been immediate. Logan has in a short time garnered the respect and admiration of his teammates and our staff for his strong character, professionalism and work ethic.
“This decision is celebrated by our players, coaches, management and staff and we’re thrilled to have Logan continue to grow in this role and with our club.”
News
Recent articles from Nick Barden