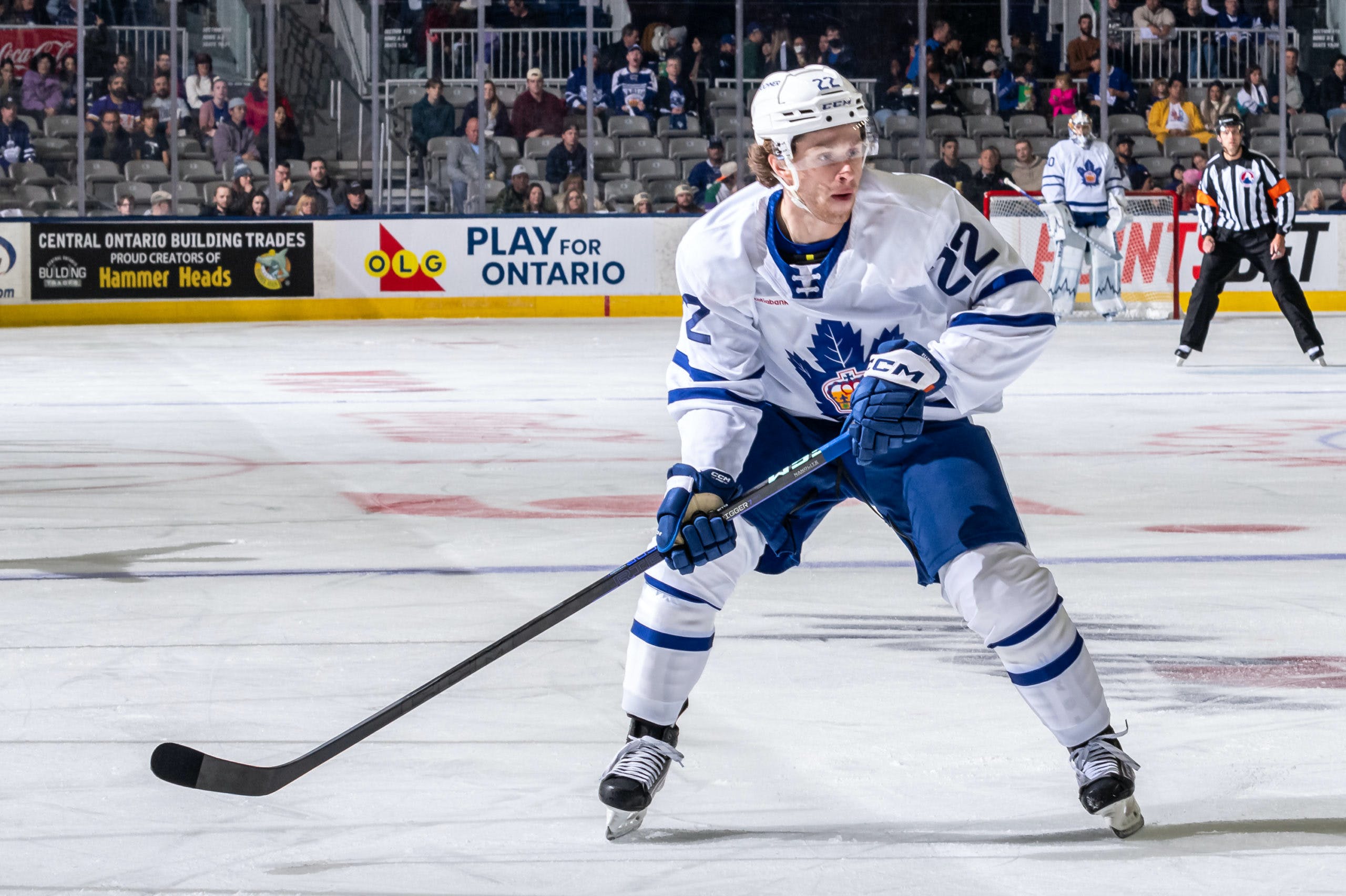 By Nick Barden
1 month ago
Mac Hollowell, Victor Mete, and Adam Gaudette are all missing from the Marlies lineup, but the team is still finding a way to get wins.
20 games into this season and Toronto has a 12-7-1 record, sitting atop the AHL’s North Division. A few key players in Logan Shaw, Joey Anderson, and Alex Steeves have been heading the ship, though there’s also a few rookies beginning to find their stride in the league.

Although he’s not a rookie, Hoefenmayer is finally getting a consistent spot in the Marlies’ lineup.
And he’s making the most of it, too.
The 23-year-old played 18 AHL games last season bungying between Toronto and the Newfoundland Growlers. He only recorded three points throughout those games, playing with the team from December to January.
Hoefenmayer began this season with the Marlies, though, and has been on a tear accumulating 17 points over an 18-game span. That’s enough for sixth place among AHL defencemen in points and fourth when it comes to point percentage.
“[He’s] just so consistent,” William Villeneuve said of Hoefenmayer on Saturday. “He brings it every night. I think his defensive play and his physical game is very underrated. I think he’s really hard to play against.”
The 23-year-old defender has found himself on every pairing and has been leaned on quite heavily by Marlies head coach Greg Moore in the early going. Hoefenmayer is also a huge threat on the power play as his shot might be one of his greatest attributes.
“(He’s) been consistent for us.” Moore said of the defenceman in mid-November. “Playing hard minutes, especially compared to the role that he played last year, he’s stepping up big time. And he’s being hard to play against.”

The 22-year-old AHL rookie has played in 10 of Toronto’s last 13 games, scoring five points during that span. Most recently, though, on Friday night, he scored his first professional goal — a mark that he called “a sense of relief.”
Ellis is a very dynamic player who uses his skating and skill to his advantage. The 22-year-old stands at five-foot-nine but often plays like he’s over six-feet tall. I believe there’s something there that could allow him to blossom into a fascinating professional player.
Toronto believes so too, with Moore giving the most praise, saying he’s “really impressed” with Ellis’ play as of late.
“He started the season getting little opportunity, having to prove himself and find his way through the ice time he was getting.” Moore said of Ellis on Saturday. “And every game that he’s gotten into, he’s gotten a little better, a little bit tighter, a little bit sharper, especially when it comes to our defence and our structure and being reliable on the ice.
“He always is able — with his speed and his skill — to create chances for us. It was yesterday (Friday) in the third period, he had an unbelievable hard play on the wall to get us out in a tight game at a big, pivotal moment in the period. And then today, another wall play in the third, a blocked shot in that same sequence. He’s stepping up big time for our team and proving himself to earn more ice time.”

Mikko Kokkonen getting his touches

The 21-year-old began his professional career in North America this season and he’s had a decent start throughout the first few months.
Kokkonen, similar to Hoefenmayer last season, has found himself bouncing between Newfoundland and Toronto this year. He’s played six games in the ECHL and seven in the AHL, only finding points with the Growlers (one goal and two assists).
There was, though, a moment on Saturday night with the Marlies which showed that the 21-year-old was quickly gaining the trust of the coaching staff.
Kokkonen was on the ice, along with Villeneuve, during a 6-on-4 which Toronto had while down by a goal near the end of the game. Although no goal was scored, there was obviously some strides made from the 21-year-old to have him on the ice in a key moment like that.
“Kokkonen has improved his physicality, his defensive skills in the d-zone,” said Moore on Saturday night. “He always is pretty good with the puck and making the simple plays, exits, and transition. Really happy with the way he’s trending right now.”
Having these young players in key situations might not be the situation Toronto drew up before the year began, but it’s a good test for all of them. This is a sink or swim mentality, and the rookies are treading above water at this point..
“To start the season, we had a lot of depth in our roster. And now you’re seeing guys get into situations and responsibilities that they didn’t have to start the season. And everyone’s proving themselves, they’re stepping up, they’re getting better with every game.”
Editorials
Recent articles from Nick Barden