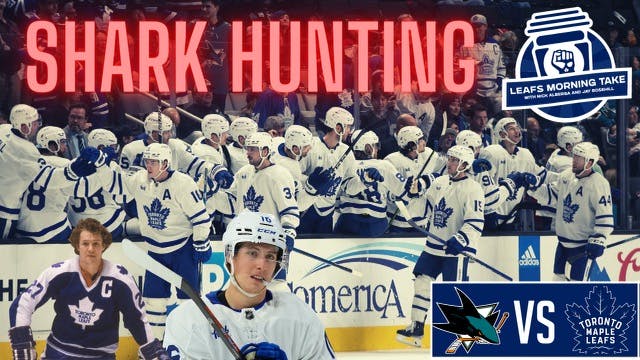 By Nick Alberga
2 months ago
You can’t stop Mitch Marner, you can only to contain him. And lately, he’s been able to do whatever he wants out there.
With a point tonight against the San Jose Sharks, the 25-year-old can extend his point streak to a ridiculous 18 games, which would tie Darryl Sittler and Eddie Olczyk for the team record.
Obviously, the Wednesday edition of Leafs Morning Take was structured around Marner’s chase. I mean, it’s a pretty big story, and it should be treated as such.
Just like Marner, Toronto has been on complete fire all month long. After a 4-4-2 October, they’re 10-1-3 in the month of November. Additionally, they’re currently riding a four-game win streak, and a nine-game point streak (7-0-2). That’s right, they haven’t lost in regulation since the Hall of Fame Game against Pittsburgh 19 days ago. Pretty good, right?
With all that in mind, unsurprisingly, I stuck with the Marner theme for the PointsBet Canada bet of the day.
Once again, no Rosie tomorrow, but don’t worry, he will drop by for another instalment of 3 Hits With Rosie. Also, Detroit Red Wings forward and Oakville native Matt Luff is expected to drop by.
Don’t forget to subscribe, like, and leave us a review wherever you’re checking us out!
Shows
Recent articles from Nick Alberga