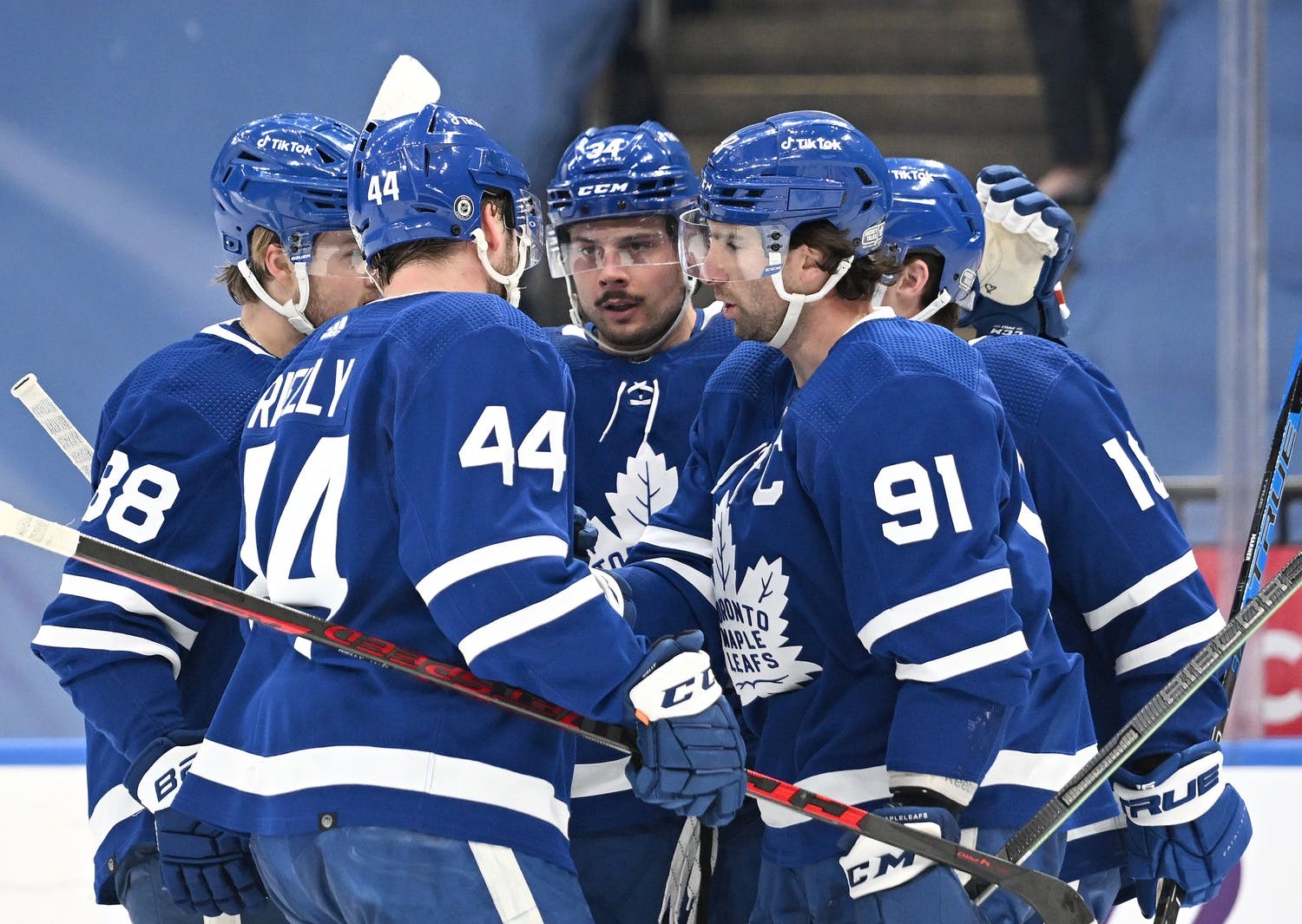 Photo credit:Dan Hamilton-USA TODAY Sports
1 year ago
When your special teams are firing on cylinders, sometimes it really doesn’t matter how you shuffle up your lines.
The Maple Leafs scored all three of their regulation goals on the power play in a 4-3 shootout victory against the Anaheim Ducks on Wednesday. The top power-play unit consisting of Auston Matthews, Mitch Marner, William Nylander, John Tavares and Morgan Rielly accounted for all of the offence.
That’s not to say Toronto didn’t play well at even strength. The club experimented with their lines ahead of the game and one of those moves included moving Nylander to the third line. The Leafs dominated the possession battle and finished with a 60.47 Corsi possession rating and 62.51 percent of the expected goals at even strength, per NaturalStatTrick.com. The team also stayed above 50 per cent for each period in both statistical categories and outshot their opponent 44-20 overall.
The game was close for a couple of reasons.
John Gibson was stellar in goal for the Anaheim Ducks. He made 15 of his 41 saves in the first period.
“I thought we possessed the puck lots had lots of o-zone time,” Matthews said after the game. “Maybe we could do a better job of getting to their net a little bit better and having more of a presence, especially given the level of goaltending that they have in there.”
The other factor was a pair of miscues that led to the first two Anaheim goals.
Sam Steel scored the first goal of the game for Anaheim just 2:46 into the first period when Pierre Engvall’s clearing attempt at the net redirected off Jason Spezza’s skate and past Toronto goaltender Jack Campbell.
Anaheim’s second goal occurred in the second period shortly after Jakob Silfverberg exited the penalty box while the Leafs attempted to cash in on a potential fourth power-play goal. Having just scored their third on a 5-on-3 attempt, Maple Leafs coach Sheldon Keefe called a timeout to keep the red-hot first power-play unit on the ice. When they failed to convert, the transition players were not on the ice as they usually would have been and Silfverberg had a clear path at the net.
“I think we have to be aware of where the clock’s at,  being the second period and long change and possibly trying to get a second D back out on the ice or at least somebody pulling out, Tavares said. “You know that’s on me.”
Keefe later took the blame for the situation given the top power-play unit’s lack of reps during the transition.
“That’s something that the second unit is accustomed to doing and they get off the ice before something like that happens,” Keefe said. “And I failed to point that out to our guys to be mindful of that, so that’s on me.”
Anaheim’s final goal was scored on a deflection in front of the net by Vinni Lettieri.
But as far as the shuffling of lines go, the Leafs held it in place for most of the first two periods. There were subtle changes that included Nylander back in the top-six when the club was in search of another goal in the third period or at other points in the game.
The Leafs top two lines had a Corsi rating over 70 per cent. The David Kampf-line, consisting of Nylander and Kerfoot registered a Corsi rating of just 42.86 per cent, but had an 88.92 expected goals-percentage
“I really liked the flexibility for sure,” Keefe said of the lines. “The ability to move things around that that worked out the way that I thought it would.”
Marner kicked off the Maple Leafs’ offence when he fired a one-timer past Anaheim Ducks goaltender John Gibson for Toronto’s first goal with Morgan Rielly setting him up for scoring play. Nylander picked up the secondary assist before scoring his own goal on the power play just over two minutes later.
Marner extended his goal-scoring streak to four games and has two power-play goals after going over 100 games without scoring a goal at 5-on-4.
Nylander scored his 17th goal of the season when he buried a behind-the-net pass from Tavares.
Tavares scored Toronto’s third goal on a two-man advantage to round out Toronto’s scoring in regulation.
Matthews scored the winning goal in a shootout.
So was the shifting of lines a success? Hard to say after one game. Analytically, it worked to perfection but they didn’t score at even strength. And with the game close it could have made a difference earlier in the game.
Jack Campbell didn’t have a great night statistically in goal as he made 17 saves on 20 shots. But it’s hard to fault him on any of the goals. He picked up the win and that’s probably the best the club could have asked for after not playing a game in a week.
Liljegren hurt
Timothy Liljegren left the game in the first period when he whiffed on a follow-through of his shot and barreled into the knees of Anaheim Ducks forward Trevor Zegras.
Keefe confirmed that Liljegren sustained a head injury but trainers saw progress in the defenceman throughout the night. The Leafs will re-evaluate his status ahead of Friday’s practice.
Uncategorized