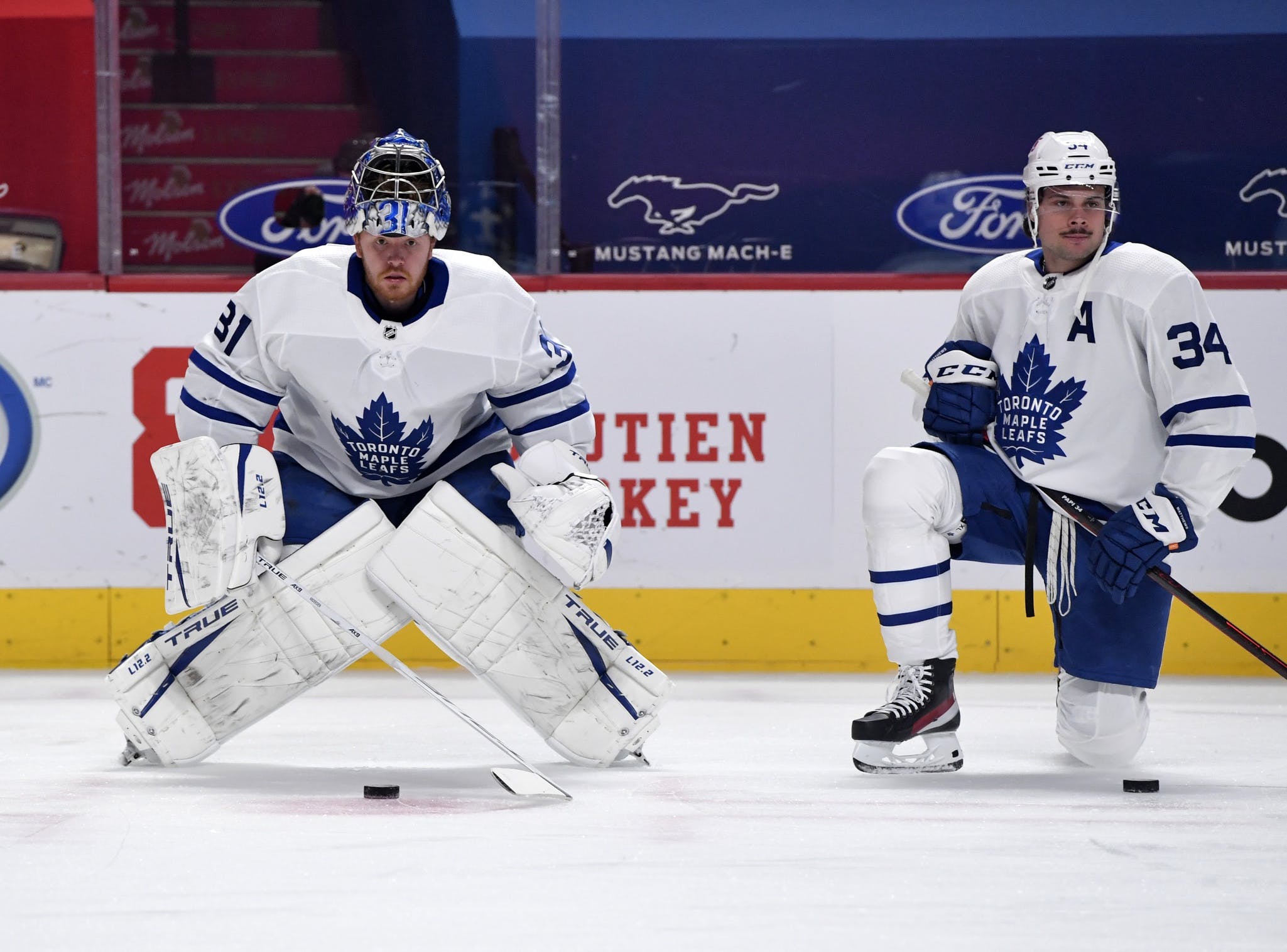 By Michael Mazzei
1 year ago
After posting two straight shutouts against the Oilers, the Leafs appear to be getting two huge boosts to their lineup on Wednesday:
@Auston Matthews told the media yesterday that he wants to return when he knows he is at 100% efficiency and it won’t hinder his abilities long-term, so it sounds like he was given the green light to be reinstated into the lineup. While it might not be the best idea given how chippy the end of Monday’s game got, he will no doubt provide a significant jolt to the Leafs offensive unit.
@Frederik Andersen also coming back brings some much-needed stability to the crease that has been off the ruckus these last few days. Toronto will need him to stay healthy as @Jack Campbell re-aggravated his leg injury during Saturday’s win and it’s unclear when he will be back (although he did get some reps in during the morning skate).
One of the biggest questions going into the game was whether or not @William Nylander will suit up for the Blue and White, but Sheldon Keefe quelled fears and confirmed the Swedish forward would play. He missed yesterday’s practice due to a maintenance day and was a brief participant during the morning skate as reported by David Alter. Nylander appeared to have a pulled something and was seen in some discomfort throughout the game on Monday night, but whatever was bothering him appears to be a distant memory.
In spite of his strong play over the past four games, @Alexander Barabanov will be the odd man out for the game. While there were some hiccups (most notably giving the puck away to @Connor McDavid in his own end), he did well in his brief stint in the top-six. I imagine it won’t be long before he gets another chance there.

Before missing out on the last two games, Matthews was on an offensive tear in spite of nagging wrist issues. It earned him one of the Stars of the Month for February with 21 points in only 11 games played. While the Leafs didn’t skip a beat in his absence, @Mitch Marner and @Joe Thornton are surely happy to have Matthews back in the lineup and it will help stabilize the forward until overall. Look for Matthews to try and make an impact even if it doesn’t appear on the scoresheet.

Speaking of the scoresheet, it’s not often that McDavid is held off it twice in a row and he is surely hungry to start producing again. He had numerous dangerous looks in Monday’s game but Hutchinson turned all of them aside. A motivated McDavid is surely going to mean trouble for the Leafs so one of the keys is building off their defensive performance two nights ago and making life difficult for him and @Leon Drasiaitl for 60 minutes.

This will be Andersen’s first start since February 20th when the Leafs defeated the Canadiens 5-3. By no means should we expect him to post Toronto’s third straight shutout against Edmonton, but a solid start will go a long way towards regaining his momentum that was halted due to the injury that has kept him out of the lineup the past week. @Michae Hutchinson played well filling in for Andersen so we shall see how the latter fares in his return.

Given how shaky of a performance @Mikko Koskinen had on Monday night, it makes sense why the Oilers would turn to @Mike Smith for the rubber match. Although he did allow four goals in the first game of this mini-series, Smith played well through the final two periods of the second game to earn Dave Tippet’s confidence going into the game. Edmonton lost a lot of ground by getting blanked twice to Toronto so they will need Smith to build off his play 48 hours ago in order to salvage this mini-series.
Puck drop is scheduled for 8 p.m. EST and you can catch the action on Sportsnet, Sportsnet 360, and TVA Sports.
All stats unless otherwise noted are from Hockey-Reference.com.
Uncategorized
Recent articles from Michael Mazzei