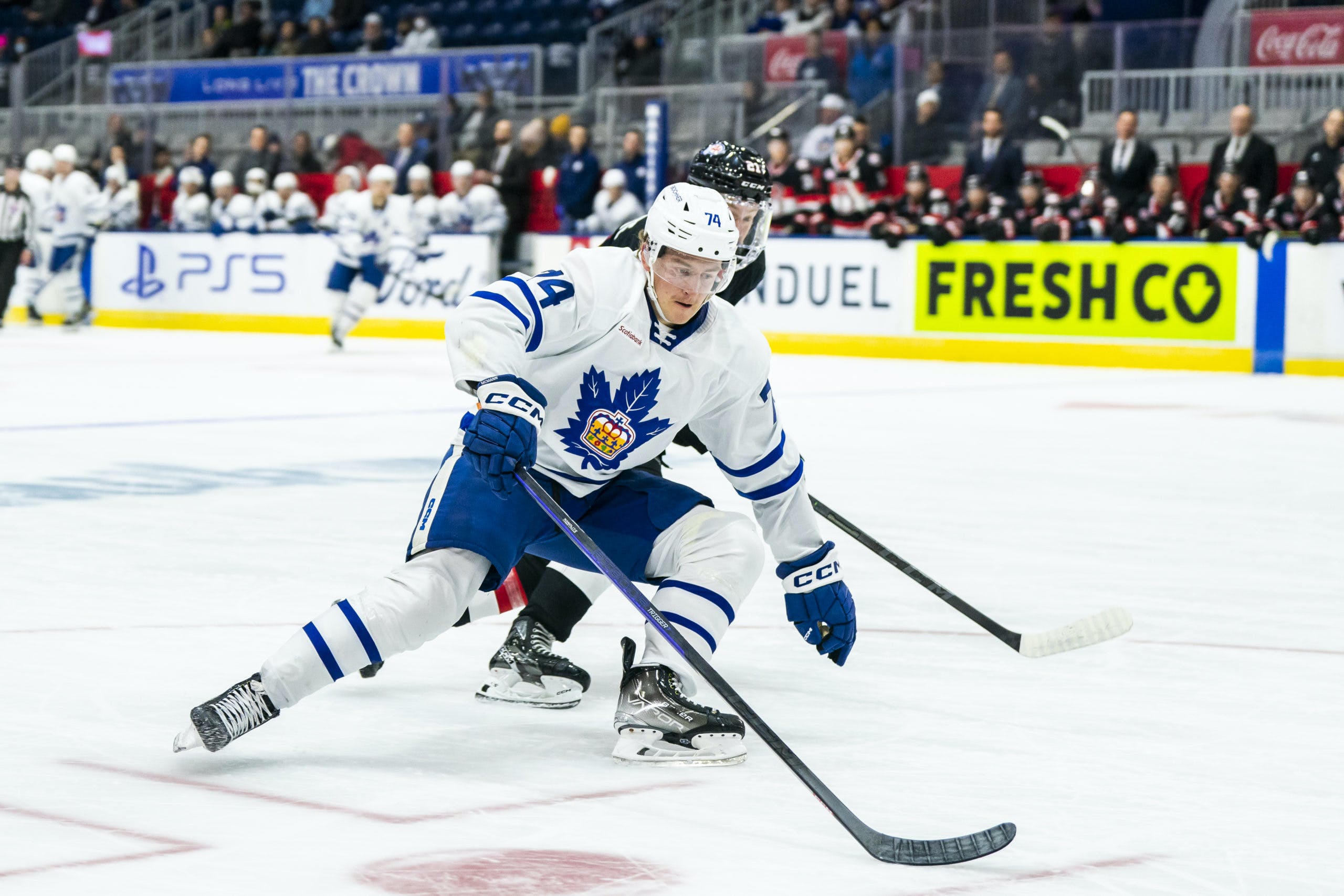 By Nick Barden
1 month ago
The Toronto Marlies are still a young team, but as youthful as they are, they’re quite fascinating too.
This week, the Marlies played three games in four nights — two at home and one on the road — before having nearly a work week full of practices.
Toronto was able to pull out one win during the trio of games and that was in Syracuse on Friday. The Marlies won the game 5-2 and it might’ve been one of their best 60-minute efforts so far this season.
It wasn’t the same result on Saturday when the team was leading Rochester 3-2 in the final minutes of the game. The Amercs were able to claw their way back, forcing overtime and then a shootout.
Toronto couldn’t find the back of the net going one-on-one with Malcolm Subban and lost the game because of it.
Although it was a loss, there was one fascinating wrinkle that came during the opening of overtime. The Marlies started two defencemen in William Villeneuve and Mikko Kokkonen alongside Logan Shaw.
Then, when Toronto won the face-off, Villeneuve came off and Bobby McMann came on. Later that night, when the Maple Leafs went to overtime against the Calgary Flames, they did the exact same thing.
Maple Leafs head coach Sheldon Keefe started David Kampf with Rasmus Sandin and Timothy Liljegren in overtime. Sandin ultimately took a stick to the face, which gave Toronto a power play. But  I wonder if Auston Matthews and Mitch Marner would’ve came on if the play continued.
You’d think so.
I’m curious as to whether this will be a one-off or if both Toronto teams will continue to try this out in overtime.

The 26-year-old late bloomer returned from his injury back on December 2nd and hasn’t missed a beat since.
McMann is on a five-game point streak at the moment with six points in that span. It feels like he’s been shot out of a cannon since his return to the lineup.
But how has he been able to do it?
“I think using my teammates well,” McMann said on Saturday. “And not only setting up the offensive zone, like skating pucks in, but then trying to generate off that. And then finding spots in the open ice where guys can use me and I can shoot the puck.”
“Powerful. Impactful.” Marlies head coach Greg Moore described of McMann’s play. “Really strong guy, wins a lot of puck battles, transports the puck, obviously can shoot it as well.
“He’d been getting some chances as of late, they hadn’t been going in. It was good to see him get em’ tonight (Saturday).”

The 23-year-old has had a great start to the season by the looks of it. He’s got nine goals and 15 assists for 24 points thus far.
For himself — being a point-per-game player in his second season of pro hockey — it’s very good. However, he’s not finding the back of the net as much as he’d like.
After Friday night’s win in Syracuse, where Steeves had two goals and an assist, Moore said it was a big game for the 23-year-old. But the Marlies head coach also said that Steeves had been “frustrated with how things have been going for him.”
On Saturday, I asked Moore what he meant by that and where that frustration might stem from. He walked back his comments saying, “maybe frustration isn’t the right word.”
Though he did add that Steeves hasn’t scored as much as he’d like.
“He’s impacted our team and played really strong in a lot of ways. I think any time you have a guy who identifies as a shooter and a goal-scorer, if you’re not feeling the back of the net, sometimes it can feel frustrating. But that’s not to say he hasn’t had a lot of impact in other areas.
“And he worked through a process of just studying his shifts and studying his game and trying to piece together specific sequences to get multiple touches and find scoring opportunities, and he’s been able to do that in the last couple of games.”

When the Marlies sign players to AHL contracts, it’s always a fascinating time. It’s difficult for players to get NHL contracts, especially with the Maple Leafs who are at the contract limit.
Toronto has a number of defencemen on AHL deals who could find themselves with an NHL opportunity in the next few years. Miller — though he’s only played nine AHL games thus far — is starting to creep into that conversation, in my opinion.
The 23-year-old joined the Marlies from the Newfoundland Growlers when a number of players went up to the injury-riddled Maple Leafs. When he arrived, Miller was thrown into the deep end right away, making up one half of the Marlies’ top defence pairing.
And he’s been treading water exceedingly well ever since.
“It’s been impressive,” Moore told Marlies play-by-play commentator Todd Crocker in Syracuse. “He didn’t start the season with us and then when he came up, in a time when there was a lot of injuries in our organization, he was thrown right into being the top pair against top lines in this league, at a league he hadn’t played in yet.
“And he’s had a lot of consistency. He identifies with being a shutdown defenceman. (Miller) moves the puck and makes really sound decisions, always finds the 10-foot pass. But we’ve leaned him on a lot and he’s done a great job.”
Editorials
Recent articles from Nick Barden