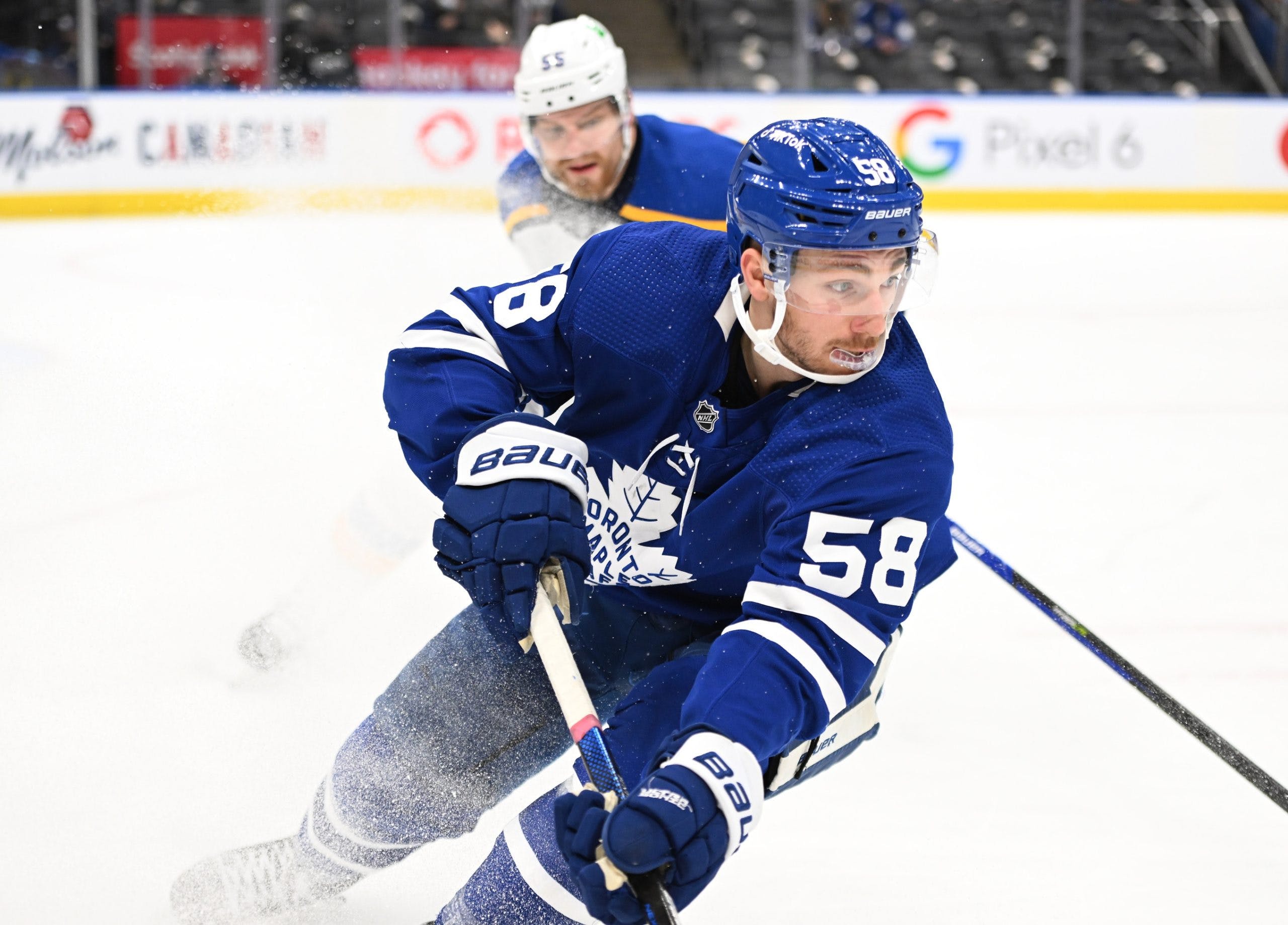 By James Reeve
3 months ago
Michael Bunting is an unrestricted free agent after the 2022-23 season, and reports suggest the Toronto Maple Leafs may be keen to retain his services for the long term.
Bunting has fit like a glove since he signed a two-year, $950,000 AAV contract with the Toronto Maple Leafs last year, providing the team with a tenacious forward who has formed a strong partnership with two of the team’s elite talents in Auston Matthews and Mitch Marner. After making a decent impact with the Arizona Coyotes through 26 games (14pts: 11G, 3A), Bunting’s first year in Toronto saw him explode onto the NHL scene.
In his first full season in the league, Bunting scored 23 goals with a shooting percentage of 13.1% and contributed 63 total points in 79 appearances. His forechecking and physicality on the puck complimented Matthews and Marner well and saw him named to the NHL’s All-Rookie Team and even finish third in Calder Trophy voting as one of the best rookies (officially) in the league.
After such a strong year, which could be on the way to being repeated after Bunting netted the team’s first goal of the new season against the Montreal Canadiens this week, it’s understandable that talks will build over the coming campaign over what Bunting could earn on his next deal, in both financial and tenure terms.
Already a popular figure among the fanbase and his teammates, Bunting’s chemistry playing on the top line makes him an important player even if he isn’t the headliner by any stretch of the imagination. Keeping him around for as long as possible to partner with the likes of Matthews and Marner could help the Leafs maintain their pursuit of the Stanley Cup. If reports are to be believed, there may be a mutual feeling from the team’s perspective.
Via TSN’s Pierre LeBrun, while there have been no talks over a new deal between either party, the Leafs may be open to offering Bunting the maximum eight years possible on a new contract as a way of lowering his average cap hit, which would help the team manage their efforts to stay a contender every season while also having to navigate some very expensive negotiations in the coming seasons.
But what sort of contract could Bunting reasonably earn if he were to sign for the full eight years? A deal of that length would effectively take Bunting through to the end of his playing career. He will be 28 years old before the start of the 2023-24 season, and an eight-year deal would see him hit 35/36 when all is said and done, so maximising his earnings will be a priority for him.
He can only earn an eight-year deal from the Leafs unless he were to be traded before the expiry of his current deal, and his preference would clearly be to remain in the blue and white that he grew up cheering for in Scarborough, Ontario. Assuming he does agree to a deal with the Leafs, there appears to be one comparison that may be used as a benchmark for what he could reasonably earn.
While he had much more experience in the NHL before signing his new contract, Tampa Bay Lightning forward Nick Paul plays a similar game to Bunting and is viewed as the best comparable to him. Both players were fourth-round selections, albeit a season apart, and the former Ottawa Senators forward signed a new seven-year deal with the Lightning with an annual cap hit of $3.15 million.
Paul had a few decent seasons in Ottawa, but his 14 points in 21 regular season games after being traded to Tampa helped him to earn a longer deal and higher salary as it showed a glimpse of what he could be capable of while playing with a contending team. Bunting’s jump in production is similar in this regard, with the higher quality of linemates helping him to become a 60-point player in the NHL effectively overnight.
Bunting may argue his impact on the team is greater than Paul’s, due to the larger sample size he will have with the team heading into his negotiations, but a deal in the $3.5 million range could be the perfect value for a player of Bunting’s quality. It’s a deal that could be very moveable further down the road should the team or player’s outlook change, but would be quite manageable for the team as they hope to see the cap jump up significantly over the next few years.
Keeping the 27-year-old around through the team’s most competitive years can do a lot to help the team, especially if the AAV is as low as it could be. If Bunting is allowed to test the market, however, he may find himself able to earn more per year on a shorter-term deal, and if that’s what looks likely, then the Leafs should consider their options carefully.
Editorials
Recent articles from James Reeve