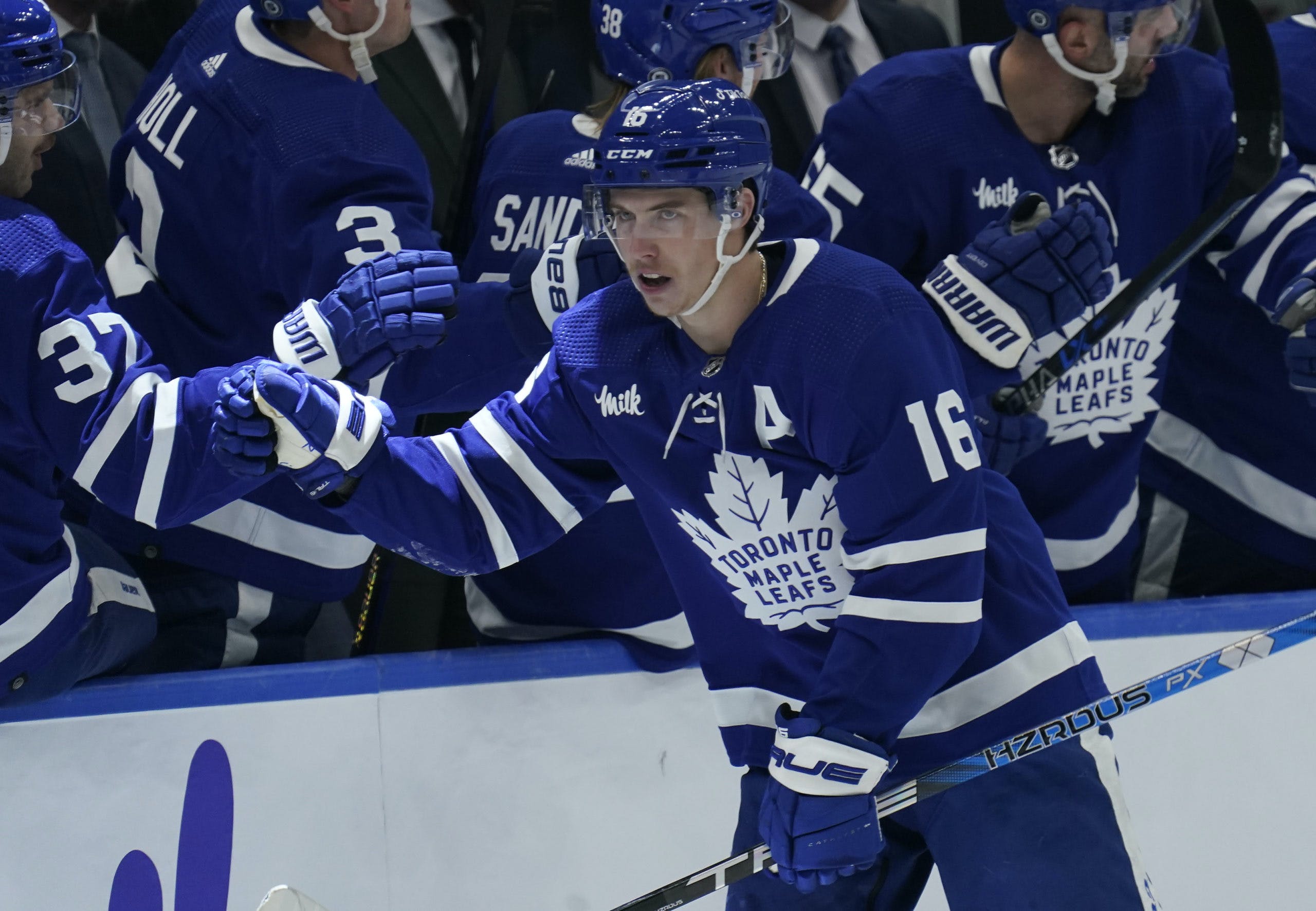 By James Reeve
1 month ago
2022 is coming to a close and one of the most memorable moments throughout the past calendar year was Mitch Marner’s franchise-record setting points streak for the Toronto Maple Leafs.
Marner’s streak officially came to an end at 23 games, coinciding with the team narrowly missing out on setting a team record for consecutive games with a point at 16.
Marner’s run, which dates back to an October 27th overtime loss to the San Jose Sharks, is something that may not be witnessed again for many years. The previous record of 18, had lasted decades without being broken. Initially set by Darryl Sittler during the 1977-78 campaign, it was matched by Ed Olczyk 13 seasons later. The record remained at 18 for a further 32 years, meaning it had stood for 45 until Marner officially reached 19 on December 3rd.
With such a historic record now officially in the books, placing Marner’s name among the all-time great Leafs players, let’s take a look at some of the numbers that make up the impressive feat.
23. Obviously, the first number is the number of games that Marner managed to register at least one point in. Five more than the previous record, it’s an impressive feat and one that should remind everyone just how special and important he truly is to the team.
47. From the date of his first point to the date of his last, it took Marner 47 days to set his record-breaking streak. More than a month-and-a-half’s worth of hockey was played during his run and fans were able to enjoy a momentous occasion as the previous record of 18 was matched and then surpassed by five more games, making it one that is likely to survive for at least a few more decades. Assuming Marner doesn’t start up another streak of his own in that time.
32. During Marner’s superb 23-game run, he amassed a stellar 32 points. Spread across a full 82-game season, that would’ve had Marner playing at a 111-point pace. To highlight how impressive that truly is, Marner currently has 41 points in 36 games, which has him playing at a 93-point pace. To elevate his scoring to be nearly 20 points above his overall pace truly is special.
11. Making up those 32 points were 11 goals and 21 assists, with the Ontario native maintaining his usual elite playmaking while also chipping in with a decent amount of goals along the way. Removing those 23 games, Marner has scored just twice more outside of his spectacular run, a run which saw him register 63 shots, converting on 17.5% of them. With such a strong run, it has elevated Marner’s current season shooting percentage to 14.4%, which is the second-highest of his career to date.
Eight of Marner’s goals came at even strength, while two of them were game-winners. He averaged just shy of 21 minutes per night during this run and it’s clear that giving stars more time on the ice will certainly produce better results.
9. While recording a point in 23 consecutive games is truly the focus of attention this run was given, Marner actually had nine multi-point games during that run. What is interesting, also, is that Marner began his run with a goal and an assist against the San Jose Sharks, and recorded his final points with a two-goal effort against the Anaheim Ducks. His streak began in California and his final points were also recorded in California.
2022 was a memorable year for the Toronto Maple Leafs, and Marner’s run was certainly a highlight that will be remembered for many years to come. Hopefully there will be more moments awaiting the team in 2023.
Editorials
Recent articles from James Reeve