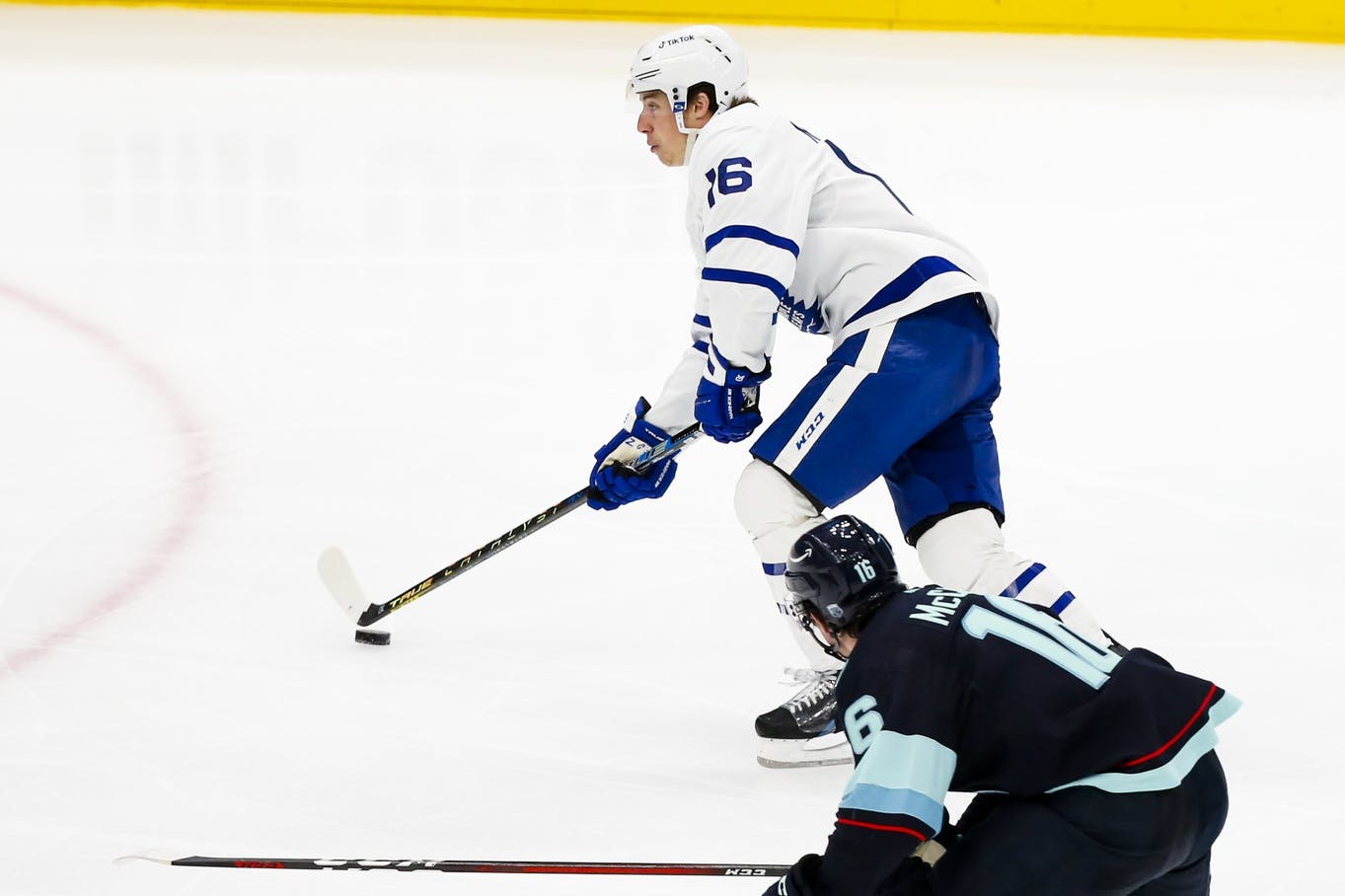 Photo credit:Joe Nicholson-USA TODAY Sports
9 months ago
SEATTLE — Mitch Marner had a front-row seat on Saturday when John Tavares made an incredible pass to Auston Matthews on a brilliant power-play goal against the Vancouver Canucks.
On Monday, Marner topped that dish and did it while his club was shorthanded. He got in close to the net and dropped a pass to David Kampf that will be replayed on television and social media for weeks to come.
“I’ve done that before in Junior, I was hoping he was with me and he was,” said Marner, who also scored a goal and added another assist as part of a three-point night. “I kind of took a quick peek and decided to try and pull the goalie with me and decided to leave it there for Davey to slide in.”
The goal from Kampf put the Toronto Maple Leafs up on the Seattle Kraken 5-1 early in the third period and essentially eliminated any realistic chance for the expansion franchise to mount a realistic comeback attempt. They went on to win the game 6-2.
“It’s special, that’s all you can really say about that play,” Maple Leafs head coach Sheldon Keefe said of the play. “To know he (Kampf) is there and to still — under that level of pressure — execute a play at that level, it’s special.”
It was a milestone night for Marner, who has clearly found his swagger over the last month. He had his career-high, eight-game goal-scoring streak come to a halt against the Calgary Flames on Thursday. But after a pair of games that saw the Maple Leafs fire 101 shots on goal and end up with no points in the standings, Marner got right back on the scoresheet on Monday.
His power-play goal in the second period gave the forward 400 points in his NHL career.
“It’s a pretty cool achievement,” Marner said. “I got to thank my parents and a lot of people around me. Without them none of this is possible.”
Marner kept the puck and put the stick aside and will give both of those mementos from the game to his folks when the team gets back to Toronto on Monday.
Unlike the previous two contests, the Maple Leafs scored early to set the tone of the game.
Alex Kerfoot scored his first goal in 12 games at 3:56 of the first period. He also became the first Maple Leaf to ever score against the Kraken, which was is a fitting irony given the summertime chaos that ensued this past summer when an outtake at Pike Place Fish Market recorded for ESPN went viral. The tweet showed Kerfoot as the Kraken’s selection at the 2021 NHL Expansion Draft.
“It wasn’t on my mind, I love this city, I grew up in Vancouver so I’m close by,” Kerfoot said. “I’m happy to be a Leaf. I wanted nothing more than to stay in Toronto and I was able to; It was just a one-day thing and I don’t really think too much of it other than you come to play in a new city for the first time which is pretty cool.”
It ended up being one of several outtakes the TV network recorded as the Maple Leafs’ selection.
Michael Bunting, Ondrej Kase and Jake Muzzin also scored goals for Toronto.
Muzzin scored his first goal in 29 games. Perhaps the biggest achievement about his tally was that he he remained in the game after an odd collision with Seattle’s Mason Appleton. The defenceman went straight to the dressing room, but would eventually return to the game to start the second period.
Jack Campbell made 23 saves for the win in a bounce-back effort following his difficult start against the Flames on Thursday. He was tested with a couple of solid chances from Seattle in the opening period, including a one-timer by Kraken defenceman Haydn Fleury
“I thought he was good,” Keefe said of Campbell. “Obviously that second one squeezes by him but a lot of perimeter shots coming at him from the outside and I thought he handled them well (and) very calmly.”
The mentioned goal was scored by Jared McCann, was Seattle’s pick from Toronto in the 2021 Expansion Draft. The Kraken’s leading scorer this season in points and goals was a Maple Leaf for a couple of days when they acquired him from the Pittsburgh Penguins for forward prospect Filip Hallander and a seventh-round pick in the 2023 NHL Draft.
The other goal Campbell allowed was in the first period when William Nylander’s attempt to dump the puck back ended up going off an official’s skate.
“That’s what happens when you’re exhausted, right?” Keefe said of the play. “You’re not thinking right, I thought we could just advance the puck, let’s get out of the zone and let’s get moving.”
Nylander’s like was on for 1:25 when Calle Jarnkrok scored the goal and Campbell didn’t have much of a chance on the shot.
One noticeable change was that Campbell elected to wear the same mask he had worn all season long. On Thursday, he tried a new mask that was made for him back in March.

Campbell’s mask for the game in Vancouver on Saturday
“I’ve had the one I’ve been wearing for a while so I tried the other one and I’ll just say I didn’t like it,” Campbell said with a smile.
Keefe didn’t like stretches of the game where he felt the Leafs turned the puck over a lot, but felt that his team kept the opposition away from the slot well. This explains why the Kraken’s underlying numbers looked decent in the game, but they didn’t have a lot of high-quality scoring chances.
According to NaturalStatTrickcom, the Leafs had a 4-3 edge in high-danger scoring chances at even strength.
Toronto’s special teams are what helped them come away with a win to wrap up a three-game road trip out west.  They were a perfect 2-for-2 on the power play and Marner’s shorthanded assist is one for the highlight reel.
News
Uncategorized