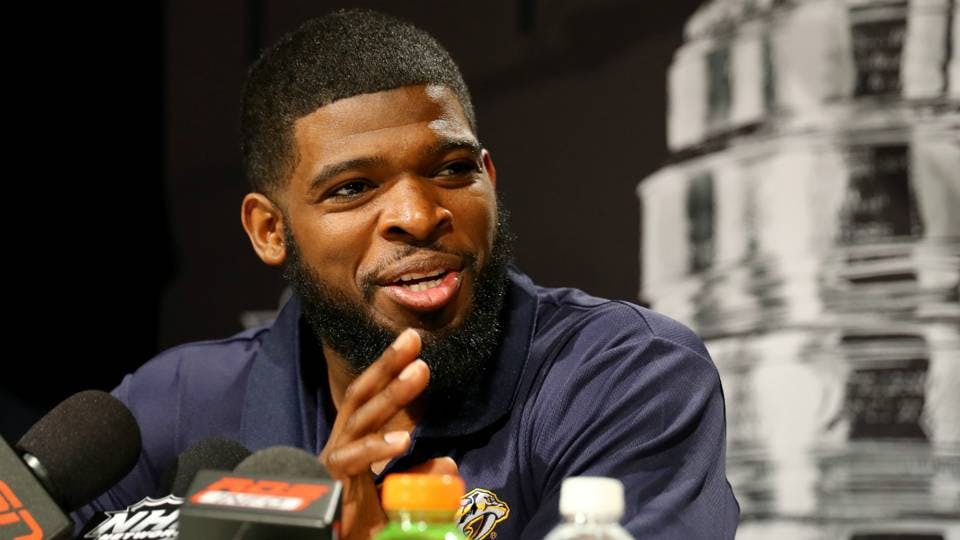 By Cam Lewis
22 days ago
P.K. Subban watches a 39-year-old Mark Giordano log big minutes for a contending NHL club and thinks “I could do that.”
The Toronto Maple Leafs seemed to have thought otherwise.
Subban, now four months into retirement, spoke with Michael Traikos of The Toronto Sun earlier this week and said that he was surprised that the Leafs, among other teams, didn’t try to sign him as a free agent. While Subban got some interest from the Edmonton Oilers and Carolina Hurricanes, he noted that the Leafs didn’t reach out to him…

“I was pretty surprised,” Subban said. “I felt I could have helped a number of teams. As a free agent, I wanted to play on a contending team. I think Edmonton showed some interest. Carolina had showed some interest.
“I did not have discussions with the Maple Leafs. They were not interested in signing me.”

The idea of a homecoming for Subban, one of hockey’s most likable personalities, is fun to imagine in theory, but it’s difficult to see a fit with the Leafs, as the former Norris Trophy winner still wanted to be an everyday player late in his career…

“I think a lot of people wanted me to continue to train for the first part of the season, but that’s not the player I am,” Subban said. “I never thought of myself as a replacement player. I was always a top player in this league. I didn’t want to be a player who is in and out of the lineup every night.”

Though Toronto’s blueline has been ravaged by injuries this season, with only Justin Holl and the aforementioned Giordano appearing in all of the team’s 41 games, their team defence is holding up just fine. The Leafs rank sixth in the league in shots against per 60 minutes at even-strength and Natural Stat Trick has them at seventh in the league in terms of expected goals against, based on shot volume and quality.

One of the biggest stories surrounding the Leafs this season has been the success of both of their reclamation projects in net, as Matt Murray and Ilya Samsonov have posted matching .916 save percentages through their first 16 games.
But as Mike McKenna pointed out over at Daily Faceoff, both goalies have cooled down as of late. Over the last month of play, Murray owns a .886 save percentage and Samsonov’s sits at .890.

“I don’t think the Leafs have been very tight in front of their netminders. But old habits are creeping into Samsonov’s game and opposing teams have figured out Murray’s weak spots.
Toronto is absolutely stacked offensively. The Maple Leafs have cruised along to a 25-9-7 record with their current goaltending. But will Samsonov and Murray be good enough in the postseason?
Maybe. But there’s also the added worry of each goaltender staying healthy. Samsonov and Murray have missed significant time already this year.”

It’s a worrying trend, especially considering what happened last year. Jack Campbell posted a .937 save percentage from October through December and then struggled through inconsistency the rest of the way. In the playoffs, Campbell was a rollercoaster ride, posting some gems and some flubs en route to an .897 save percentage all told in Toronto’s loss to the Tampa Bay Lightning.
McKenna suggests Leafs general manager Kyle Dubas would be wise to add some insurance in the form of a veteran third-string goalie ahead of the March 3 trade deadline. The names that he suggests are former Leaf James Reimer of the San Jose Sharks, Thomas Greiss of the St. Louis Blues, or Laurent Brossoit, who cleared through waivers and is playing for the AHL affiliate of the Vegas Golden Knights.

“One thing I am certain of: if the Maple Leafs lose out because of goaltending, jobs will be lost in Toronto. It’s been a storyline for too many years. Going with Murray and Samsonov was a major gamble going into the 2022-23 season. It’s mostly worked out to this point.
But there’s no shame in having a plan C. And I think the Maple Leafs would be wise to have one.”