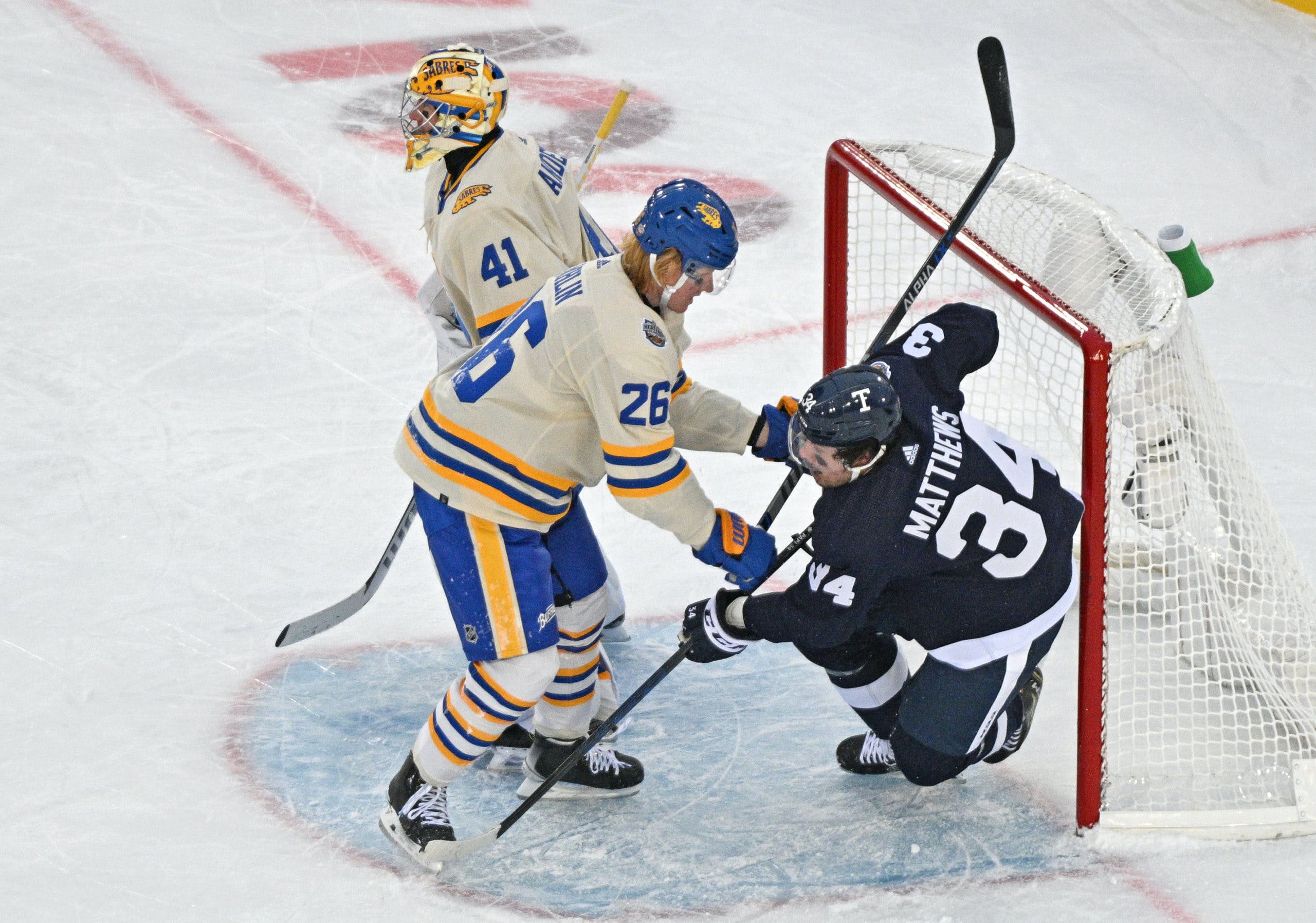 By Nick Barden
10 months ago
The Maple Leafs will be without Auston Matthews for the next two games due to a suspension handed out by the NHL’s Department of Player Safety.
On Sunday afternoon during the Heritage Classic, Matthews got into it with Rasmus Dahlin behind the play. The two were giving each other shots and eventually, Matthews cross-checked the Swede in the neck/head. Both were assessed cross-checking penalties but still shook hands after the game finished.
“It’s just battling in front of the net,” said Matthews after Sunday’s game in Hamilton. “I felt like I kind of rode up his shoulder. His shoulder pad kind of rolled up a little bit, but I haven’t really seen the replay. But, I mean, that’s hockey, it gets competitive out there, guys are physical and trying to compete.”
Just over three hours after the festivities at Tim Hortons Field came to a close, the NHL said the 24-year-old would have a hearing for the cross-check on Monday. It was less than 24 hours after the incident and the NHL handed Matthews a two-game suspension.
“While we acknowledge Matthews’ argument that this is not a cross-check meant to harm or injure his opponent, it is also not a routine motion to box out an opponent or to gain body position.” The NHL Department of Player Safety said in their release. “This is a high forceful cross-check that makes contact with an opponents neck with sufficient force to merit supplemental discipline.”
This ruling has a lot of criticism attached to it due to the lack of consistency from the Department of Player Safety. Not even two days earlier, the NHL fined Marcus Foligno $5000 for a knee-on-knee with Jakub Voracek.
No suspension, just a fine.
This came a month after Foligno was handed a two-game suspension for kneeing Adam Lowry in the head while the two were wrestling on the ice. What do you have to do to be suspended in the NHL? Is it head contact? Is it the NHL showing that they can suspend their star players?
A few weeks ago, the Edmonton Oilers’ Markus Niemelainen was fined for a similar play to Matthews’ cross-check, only having to pay $2,043.75.
Four days earlier from that play, Dylan Cozens cross-checked Brock Nelson in the back, when he didn’t see it coming.
Watching this sequence, Cozens clearly had intent, following Nelson all the way to the New York Islanders’ bench. This was a fine that cost Cozens $2,235.42.
There are plenty of incidents like Matthews’ where players didn’t even get a fine or a hearing from the Department of Player Safety.
Like this shot from Pierre Luc-Dubois on K’Andre Miller.
Or Zdeno Chara cross-checking Brendan Gallagher in the neck back in February.
And even this play, on Wayne Simmonds against Montreal last season.
I’m not saying that Matthews didn’t deserve the suspension because any shot to the head is suspension worthy. I think when someone is targeting the head, it’s an obvious cause for concern. Although Matthews said he thought the stick rode up the shoulder, it evidently did not, and it’s a suspendible play.
What I’d like to see from the Department of Player Safety, though, is consistency. If you’re handing out a two game suspension to Matthews, why not do the same for Chara, Dubois, and even Joel Edmundson? If it’s head contact, make it a suspension.
The goal is to limit head contact in the NHL, whether it be cross-checks or just hits in general. So, why not suspend players who make subsequential contact to the head at any point? I understand that Department of Player Safety can be a difficult job at times, but George Parros needs to at least try and make calls consistently.
If there’s no consistency on anything, what’s the point of there even being a Department of Player Safety? At this point, everyone is just asking for it to be better, and hopefully it will be.
More from The Leafs Nation
Uncategorized
Recent articles from Nick Barden