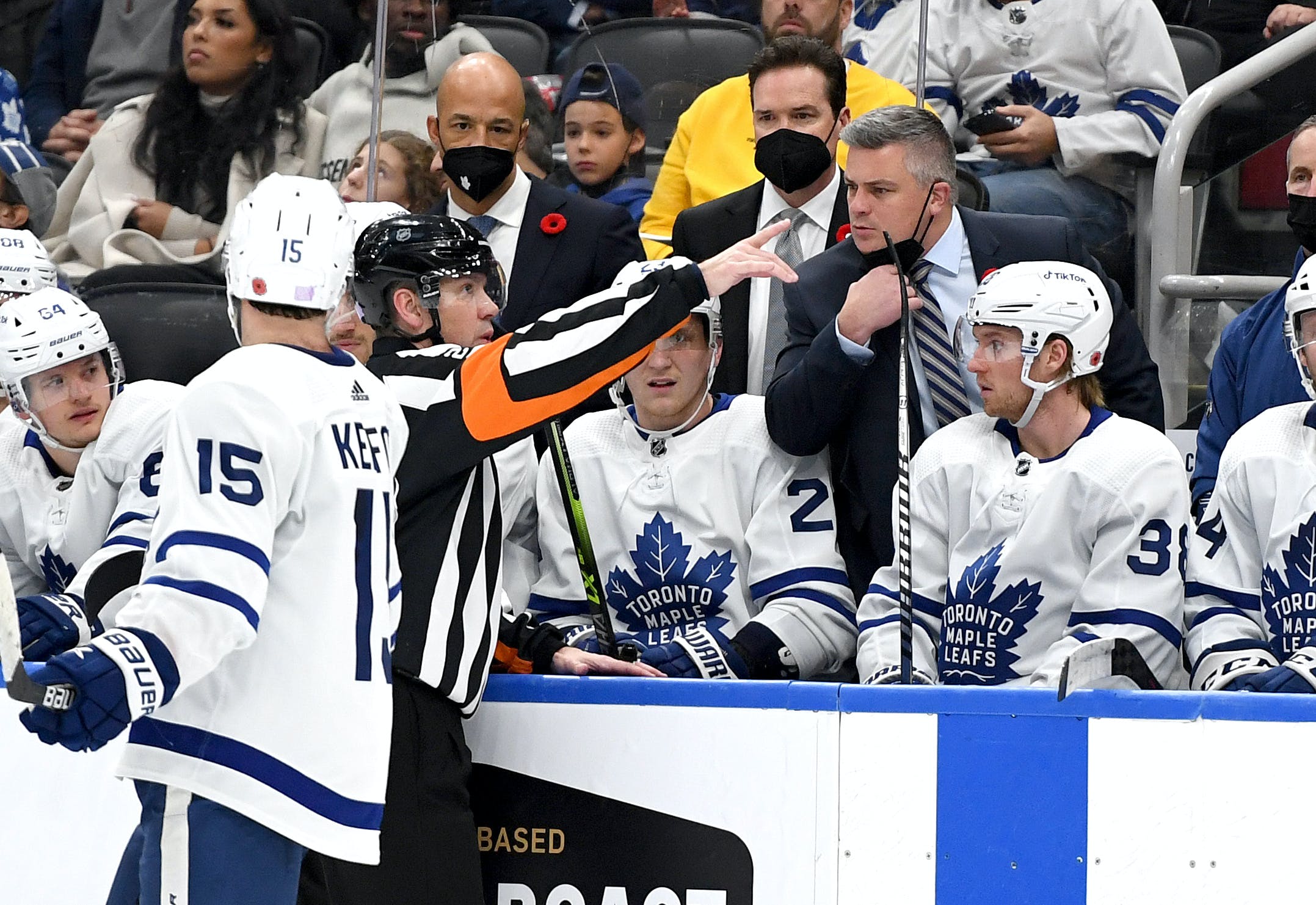 By Filipe Dimas
11 months ago
After spending a month as the NHL’s hottest team, the Toronto Maple Leafs have lost two games in a row where questionable officiating played a major role in both outings. That being said, regardless of how you feel about certain calls or missed calls, it’s irresponsible to use the officiating in these games as an excuse for one simple reason… This is simply how NHL referees operate and we should expect it by now.
For whatever reason, referees across the NHL have decided to prioritize game management and balancing the amount of calls each team takes over simply calling penalties as they happen. On Saturday night, Toronto entered the game as the NHL’s least penalized team with Minnesota sitting on the opposite end of the spectrum as the league’s sixth most penalized team. Yet despite this massive discrepancy, the two teams were dead even in penalties taken during the game. On Sunday, the referees refusal to make certain calls lead to the game spiraling out of control leading to injury and a finish that closer resembled the WWE more than the NHL. Despite all the chaos, the two teams once again were virtually deadlocked in penalty calls with five powerplays apiece and a 10 minute misconduct being the only thing preventing the number of penalties on both sides from being dead even.
Even after logging 31 penalty minutes in last night’s contest, Toronto still sits as the seventh least penalized team in the league, averaging only 7:41 PIM/GP. While that seems like it should be a huge advantage for the blue and white, giving them more time on the powerplay than their opponents, it should also be pointed out that one of the only team’s that takes less penalties than Toronto happens to be whoever Toronto is playing against that night. Currently, the Leafs have a negative penalty differential on the season meaning despite being one of the cleanest teams in the league, they’re still dirtier than their opponents on a game by game basis.
None of this should be a surprise for any seasoned hockey fan. NHL referees have become so predictable in the way they call games that breaking the rules is no longer the greatest indicator of a penalty being called. A team that was recently on the powerplay, especially if they are currently winning the game, is far more likely to receive a penalty than their opponents, regardless of what infractions take place on the ice.
With that considered, it’s not surprising that a team who has been winning as much as Toronto and rarely takes penalties themselves happens to have a negative penalty differential. It’s no coincidence that the last time the Leafs took less penalties than their opponents was during a 2-0 loss to the Penguins on November, 20th. If you’re losing, or were recently penalized, NHL refs will make sure you have a chance to get back into the game, whether it’s deserved or not.
It may be unfair, but that’s the way NHL officiating operates, and it’s only going to get worse come playoff time.
Last year the hockey world saw how bad playoff officiating can get when Connor McDavid was forced to speak out against the refs after drawing zero penalties during Edmonton’s series against Winnipeg. Despite having the sport’s biggest star voice his concerns over the way games are called, nothing has been changed. Much like Toronto, Edmonton also has a negative penalty differential on the season thanks largely in part due to their powerplay dominance making referees even more hesitant to award a penalty that has a 1/3 chance of being converted into a goal.
When playoff time comes around, Toronto can’t afford to hope that NHL referees suddenly have a change of heart and decide to start calling the rulebook as written. It’s become clear that the game is going to be called a certain way, and now it’s on the team to adapt and find a playstyle that can take advantage of whistles getting put away during the playoffs.
The good news is, we’ve already seen glimpses of it so far this season. Toronto has made a habit of scoring grittier goals with players getting in front of the net, screening the goalie, deflecting shots, and tipping in rebounds. Goals like those become a necessity in the playoffs where the game gets more physical and players battling in front of the net can all but get away with murder before the referee finally blows a whistle.
The team also looks like they finally have some fire behind their eyes as well. Players are quick to stand up for each other, cheap shots against teammates no longer go unanswered, and there’s a contagious energy around the team that can be felt during every goal celebration or image of players shouting from the bench.
All of this helps in the playoffs, but whether it will be enough to end the 18 year long drought remains to be seen. Earlier in the season I wrote about how the Leafs are playing an 82 game long preseason this year, and that everything before playoffs exists just as preparation for those games that matter most. Part of that preparation includes not only having a game plan for defeating any opponents, but also a plan for how to deal with the officiating.
At this point, being shocked that NHL refs aren’t doing their job properly in the playoffs is on par with being shocked that there’s long lines at the mall in December. You can stand around and feel bad for yourself, tossing ideas forward on how this can be fixed, or you can realise that you knew this was coming and had months to prepare for the inevitable. It’s time Toronto starts preparing.
Content
Recent articles from Filipe Dimas