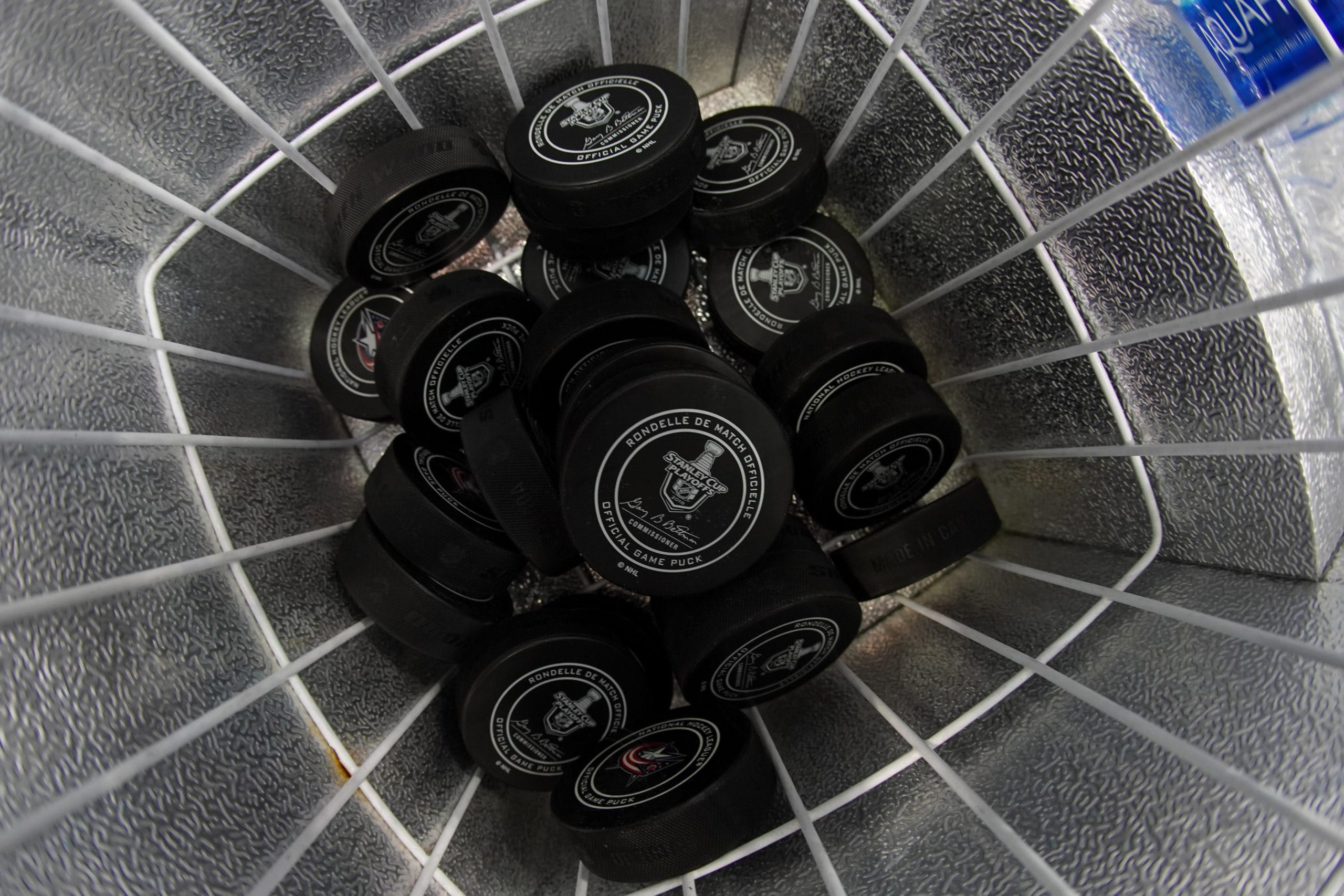 By Earl Schwartz
7 months ago
There is a certain degree of schadenfreude at the end of the season, when performance bonus overages are announced for NHL clubs. Every team is going to be competing for the same players come Free Agency, and every dollar in overage is one less you have to compete with on the open market. Contending teams tend to be tight to the cap and rely on contributions from players on Entry Level Contracts, which often leads to those teams being punished for their success with bonus overages.
There is perhaps no better example than @Artemi Panarin scoring in the last game of the 16-17 season, tying him for 10th in the league in points. That earned him $1.725m in Schedule B bonuses, combined with his $850k in A bonuses left Chicago with more than $2.5m in bonus overages. Right after a disappointing 1st round sweep, the Blackhawks traded Panarin in the reshuffle caused by the cap squeeze. It was the symbolic end to a dynasty that won 3 cups in 6 years, all predicated by an inconspicuous game 82 goal.
In 2021-22 there were over 300 players eligible for performance bonuses. Just 6 of those players were on 35+ contracts, eligible for up to $6m in performance bonuses combined. That means on average an NHL club has 10 players eligible for PBs, most likely all ELCs. Players earned over $10m in PBs in 21-22, with $4.1m coming from 35+ contracts.
Not every earned PB is a bonus overage, though. If a team has cap space left over at the end of the season, it can be used to pay for these PBs before they become an overage. The season was 200 days long, and you take the average of each day’s cap space (including the time a team is on LTIR) to determine the team’s end of season cap space. If a team was using LTIR to exceed $81.5m this season, that drags the average down. A good example of this is the Islanders, who started the season off with Johnny Boychuk on LTIR. They traded him to Buffalo on November 3rd and immediately began accruing cap space. They had 4 players earn a total of $2,287,500 in PBs, but by the end of the season, their average cap hit was $2,041,704 under $81.5m.

(salary data via PuckPedia.com)
That cut down the Islander’s bonus overage to just $245,796. Another way to put it since Buffalo took Boychuk for literally nothing, is that the Sabres gifted the Islanders with just over $2m in cap space for 22-23. That was an excellent move by Lou Lamoriello. Speaking of Lou though, he has a habit of not reporting the contract details and as such, I had no idea what the requirements for @Zdeno Chara to earn his PBs. Thanks to PuckPedia we know it was a games played bonus, but we don’t know exactly how many games he had to play to earn his $750k bonus.
In total there was 14 teams with bonus overages, nearly half the NHL. There were some teams who used LTIR but did not have players earn performance bonuses, so more than half the teams in the league spent over $81.5m against the cap in 21-22.

I collaborated with PuckPedia to calculate these performance bonus achievements, and verify them with teams and agents. Their website is an excellent resource for this type of contract detail, you can find their explanation on performance bonuses here. These are the 14 teams who will have their cap space reduced in 2022-23 as a result of bonus overages, in order from largest overage to smallest:
Vancouver Canucks: $1,250,000
Montreal Canadiens: $1,132,500
St. Louis Blues: $1,100,000
Edmonton Oilers: $896,000
Dallas Stars: $675,000
Florida Panthers: $637,500
Los Angeles Kings: $637,500
Philadelphia Flyers: $295,000
New York Islanders: $245,796
Chicago Blackhawks: $237,500
Toronto Maple Leafs: $212,500
Carolina Hurricanes: $112,500
Washington Capitals: $100,000
Colorado Avalanche: $25,000
It’s interesting that two of the three largest overages are a result of 35+ PBs. For the Canucks, it was @Jaroslav Halak earning $1.25m for playing 10 games. For St. Louis, it was @Tyler Bozak earning $1m in games played bonuses, plus an additional $100k for the Blues winning a round. A player can get PBs for almost anything on a 1 year, 35+ contract, while ELCs are bound to Exhibit 5 PBs. This is why 35+ players often have bigger bonuses that are far easier to achieve.
In Philadelphia’s case, $212,500 of their overage comes from @Owen Tippett, acquired at the deadline in the @Claude Giroux trade. He earned it for being in the top 3 forwards for +/-, minimum 42 GP. He would not have earned it on Florida, but since the Flyers’ 3rd best forward in this category is -11, Tippett’s -2 on the season qualified him for a PB.
Florida actually had the opposite happen, when they got Giroux he bumped @Anton Lundell out of the top 6 F in TOI, saving them $212,500. Then there’s @Spencer Knight, who had a shutout on the 3rd last day of the season which qualified him for $212,500 for shutouts, and moved his GAA below the league median for an additional $212,500. For a Florida team that had a disappointing end to the season, incurring $425k in bonus overages for a game you could have lost, and still won the Presidents Trophy is a tough pill to swallow. In Toronto, @Timothy Liljegren would have earned another $187,500 for being top 4 D in TOI, but trading for @Mark Giordano saved the Leafs as well. Talk about a deadline trade, they spared themselves from a larger bonus overage and extended Giordano for well below market value.
I am also fascinated by the run-on effect of bonus overages. When a team has overages in consecutive seasons, bad contracts from prior seasons can continue to haunt them long after the contract is done. Say for example that a player who is overpaid by $1m has 2 years remaining, and is on a team who spends to the cap. In the first season the team incurs an overage of $850k. Had the player been paid $1m less, the team would have sufficient cap space for the bonuses and incur no overage. In the second season they spend to the cap once again, and players earn $1.85m in bonuses. Not only could they have avoided $1m of that becoming overages by that player not being overpaid, but they would have had an additional $850k in cap space had they not incurred the overage a year prior. Then the contract of the player who is overpaid expires, but the dead cap remains. The following season if the team spends to the cap, any bonus overages they incur could in theory be attributed to the $1.85m in dead space, and so the cycle continues.
Take Colorado, for example. They had $1.74m in overage penalties for 21-22, if they had that cap space open they could have easily avoided a $25k overage for 22-23. That $25k accrues to over $100k by the trade deadline too. I’m sure it is a penalty they’re willing to stomach, but if the most recent trade deadline was any indication every dollar counts. I think in general it is acceptable for playoff teams to have overages. If you have ELC players on your team, they are probably providing more than enough value to make it worthwhile. Outside of games played bonuses, an ELC player needs to be playing in a big role to earn any of their “A” categories, which would otherwise be filled by someone making far more than their $925k max base salary.
On the other side of the coin, there is virtually no restriction to what players on 35+ contracts can earn bonuses for, and I think teams are finally getting wise to giving out bonuses that are easily achievable. Not only are there fewer 35+ contracts, but less of them are getting PBs at all. 8 seasons ago, teams collectively spent more than 6% of the cap on 35+ players, while it was under 2% this past season.

That trend has more to do with the league getting younger than anything else, fewer players eligible for 35+ contracts is essentially saving GMs from themselves. There will always be a baseline of ELC players earning PBs, but the amount of dead cap space from bonus overages is on the decline as some of the more frivolous 35+ bonuses become a thing of the past. The amount that teams have spent over the cap using performance bonuses over the past 3 seasons:
21-22: $7,556,796
20-21: $9,122,187
19-20: $13,399,418
As a result of the MOU teams had the option to split their 19-20 overages into 20-21, St. Louis, Boston, Edmonton, Vegas, and Arizona chose to do so. That moved $2,095,174 in overage penalties from one season to the next. Even though teams have remained extremely tight to the cap, they have had time to adjust their strategy and limit their exposure to bonus overages. The Rangers even had the cautionary tale of going over the performance bonus cushion, which is a favourite topic of mine.
Teams cannot have more than 7.5% of the cap in potential performance bonuses on the roster (sort of). The Rangers had both Lafreniere and Kakko on their roster with $2m each in schedule B bonuses, all totaling $5.5m with their A bonuses. An assortment of other ELCs put them over the $6,112,500 cushion, and they were charged a cap hit even though they weren’t actually spending any of that money. I would love to dive into the mechanism of that and the motivations behind why it was implemented, but alas, that is a story for another day.

What Did We Learn?

Well, bonus overages aren’t really such a bad thing. If you’ve got an ELC player doing well enough to earn schedule A bonus, you’re happy to pay them, and if they’re earning trophies that get them their schedule B bonuses, the cheque is writing itself. It’s the 35+ bonuses that often get you in trouble, giving a guy $1m for making the playoffs is great because it opens up $1m to spend right now. It’s not so great if you spend that money and don’t do anything in the playoffs. It’s even worse if you’re the Canucks getting $1.25m in overages and missing the playoffs entirely.
For non-playoff teams, they’re most often getting overages from being in LTIR. It’s just the price you pay to reclaim the cap space of an injured player. That was the case for Vancouver, Montreal, Philadelphia, and the Islanders. For all of those teams it hurts their ability to turn things around quickly, and suddenly giving out those performance bonuses doesn’t seem so worthwhile.
In the bigger picture, bonus overages will only take up 0.03% of all the available cap space next season. Teams are getting better at managing them, but it takes time for contracts to end and be replaced. Toronto hasn’t signed a single contract with performance bonuses in years. The only player in the organization with PBs was Liljegren, and he earned a $212,500 bonus for being in the top 3 D for +/- to give the Leafs their overage. His contract was signed in 2017, by another GM.
There are a few cases every year worth scrutinizing, most often you can tell at the moment they are signed that it will end up in a bonus overage. That type of borrowing from future cap space is almost never advisable or worthwhile unless you win the cup. In almost all other cases, performance bonuses earned are well worth the cap space, and the bigger focus should be on the spending that gets them so tight to the cap in the first place.
If you enjoyed this breakdown of what goes into bonus overages and the impact they have on the teams that incur them, you might also want to follow myself (@EarlSchwartz27) and @PuckPedia on Twitter.
More from TheLeafsNation.com