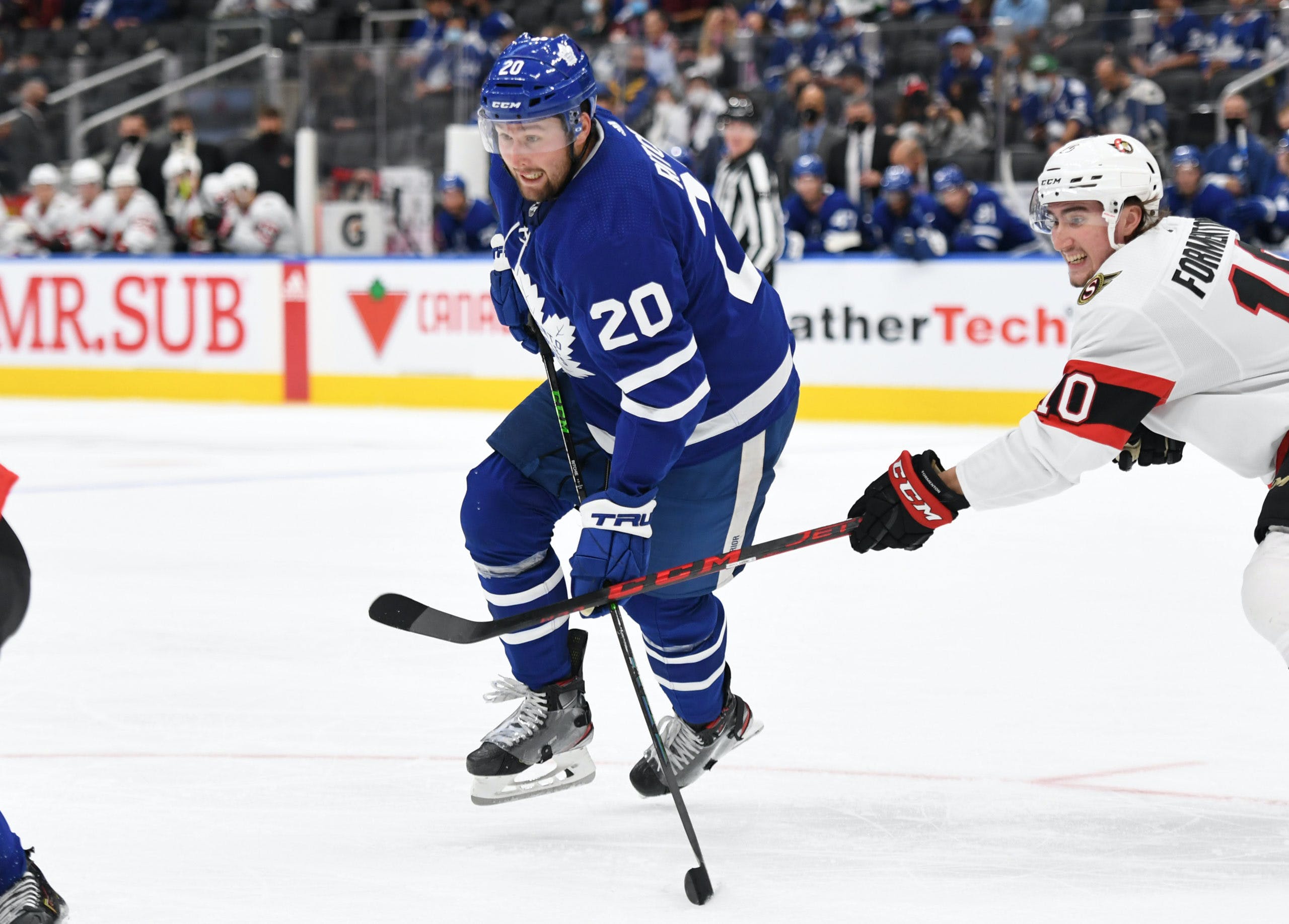 By Nick Barden
10 months ago
17 hours after the Maple Leafs’ 4-2 win over the Edmonton Oilers and @Nick Ritchie is placed on waivers.
There was a lot of excitement after the Maple Leafs signed the 26-year-old. Another Toronto-born player coming home, that’s thrilling. Over the 30 games he’s played with the Maple Leafs, Ritchie scored one goal and assisted on seven more.
Eight points over 30 games for someone making $2.5 million over this season and the next — that isn’t good enough.
Toronto has offered Ritchie many opportunities up and down the lineup to prove he belongs, but the 26-year-old has never taken advantage of it.
Now, he’s left at a crossroads.
It’s a difficult decision for Toronto because they’ve been able to go this long without placing any big names on waivers. I think you could argue it was either Ritchie or @Pierre Engvall going on the waiver wire.
Engvall, though, has been an integral part of the Maple Leafs fourth line with @Jason Spezza and @Wayne Simmonds. At five-on-five, the line has a 67.42 CF% and has only given up five high-danger chances against at all strengths this season.
Ritchie on the other hand, at five-on-five, has an xG% of 48.97, which is the second-worst on the team only behind @Ondrej Kase. His GF% at five-on-five, though, is the worst on the Maple Leafs at 36.84%.
The 26-year-old has also given up more high-danger scoring chances against than he has for. His five-on-five HDCF% currently sits at 46.67, surprisingly, only ahead of the Maple Leafs’ @David Kampf.
The final reason it wasn’t Engvall on the waivers is that his salary is also $1.25 million cheaper than Ritchie’s. With the roster Toronto wants, it wouldn’t make sense to keep Ritchie over Engvall at this point.
Placing the 26-year-old on waivers free’s up some of Toronto’s cap space. If Toronto traded him, it would free up even more space. According to TLN’s own, Earl Schwartz, the Maple Leafs could have up to $4.25 million at the deadline if Ritchie was to get traded.
That’s plenty of cap space for Toronto to play around with in terms of additions at the deadline. If they wanted to, the Maple Leafs could also use that money to re-sign @Jack Campbell during a Vezina-worthy season so far.
Schwartz’s thread also says waiving Ritchie allows the Maple Leafs to keep @Timothy Liljegren and @Rasmus Sandin on their roster. He also stated it would be more challenging to move the 26-year-old next year as he’s due to be paid more.
It will be interesting to see what the Maple Leafs will do with Ritchie if he does clear waivers. There’s a possibility he remains with the team on the taxi squad, but there’s also the chance that they send him to the Marlies for some extra work.
Either way, I believe Ritchie will likely continue to work on finding himself on the ice. Playing at home means a lot to him, and I’m sure he wants to prove that to both Sheldon Keefe and Kyle Dubas.
All of this, though, is up in the air until 2 PM ET. At that time, we’ll know if an NHL team has claimed him, or if he’ll remain within the Maple Leafs organization.
Ritchie’s future remains in the balance until then.
(Stats courtesy of Naturalstattrick.com)
Uncategorized
Recent articles from Nick Barden