Nick Robertson’s opportunity with the Leafs is here, and he needs to run with it 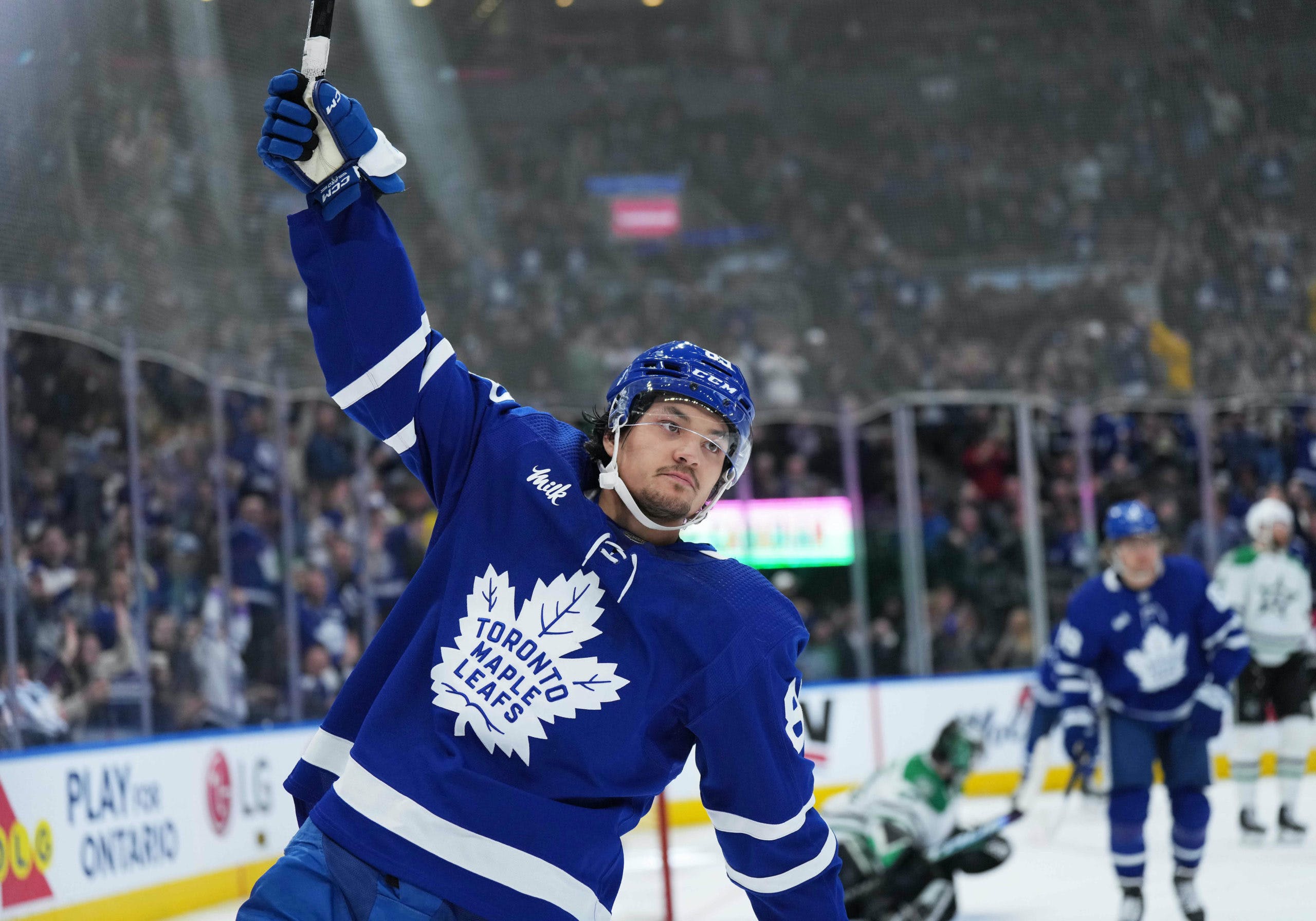 By Nick Barden
1 month ago
Nick Robertson’s chance at some runway in the Maple Leafs’ lineup has finally arrived.
Calle Jarnkrok went to the dressing room during the second period of Wednesday night’s game against San Jose. Maple Leafs head coach Sheldon Keefe said the 31-year-old would “miss some time” after the game but didn’t elaborate further.
Though after Toronto’s practice on Friday before leaving for Tampa, Keefe addressed Jarnkrok’s status saying he’d miss a minimum of two weeks with a groin injury. An unfortunate outcome for the 31-year-old who was having a decent run in his first 25 games.
This injury, though, opens the door for Robertson, who hasn’t had the most consistent schedule of games in the NHL this season.
“I want to get these games, get going, get the production back.” The 21-year-old said to the media on Friday. “It’s kind of hard when you’re out for a little bit and you come back, it’s hard to get back into it. But now, it’s the challenge of with every game I get to do everything I can to be consistent and stay in the lineup.”
Robertson’s season has been fascinating to say the least. He wasn’t in the lineup for Toronto’s first four games of the season, but then found himself playing in the following six (Oct. 20-30).
After that stretch, Keefe took him back out of the lineup for three games before putting him back in for four in a row (Nov. 6-12). Since then, the 21-year-old has played in two games — one on November 23rd against New Jersey — the other versus the Sharks on Wednesday.
During Friday’s practice in Toronto, Robertson was playing on a line with John Tavares and Mitch Marner.
Those are two players who are on pace to have career seasons with the Maple Leafs. This will be a chance for them to continue their play while hopefully jumpstarting Robertson’s production.
“Just give him the puck,” Robertson said of what he needs to do to have success with Marner.
“I think that’s the thing I’ve seen just being with him, I think if you give him the puck, let him do his thing, and he opens up chances for both linemates.”
The 21-year-old winger hasn’t registered a point since November 6th in Carolina. He hasn’t scored a goal since his overtime winner against Dallas in his season debut. And it won’t get any easier on Saturday night against the Lightning.
“I think, defensively, they’re a very offensively gifted team,” Robertson said. “I think we just got to match that, our intensity in the o-zone and our d-zone, and I think we’ll be fine.”
What’s most interesting about this opportunity for Robertson is that he’s never played against the three-time Stanley Cup finalists. They’re a very big and physical team, and with the 21-year-old on Toronto’s second line, he’ll be challenged every shift.
If he can find a way to make a difference in this game, like he did against Dallas, there are good things ahead for Robertson. If the 21-year-old cannot find any rhythm, he might, once again, be on the outside of the Maple Leafs’ lineup looking in.
Editorials
Recent articles from Nick Barden