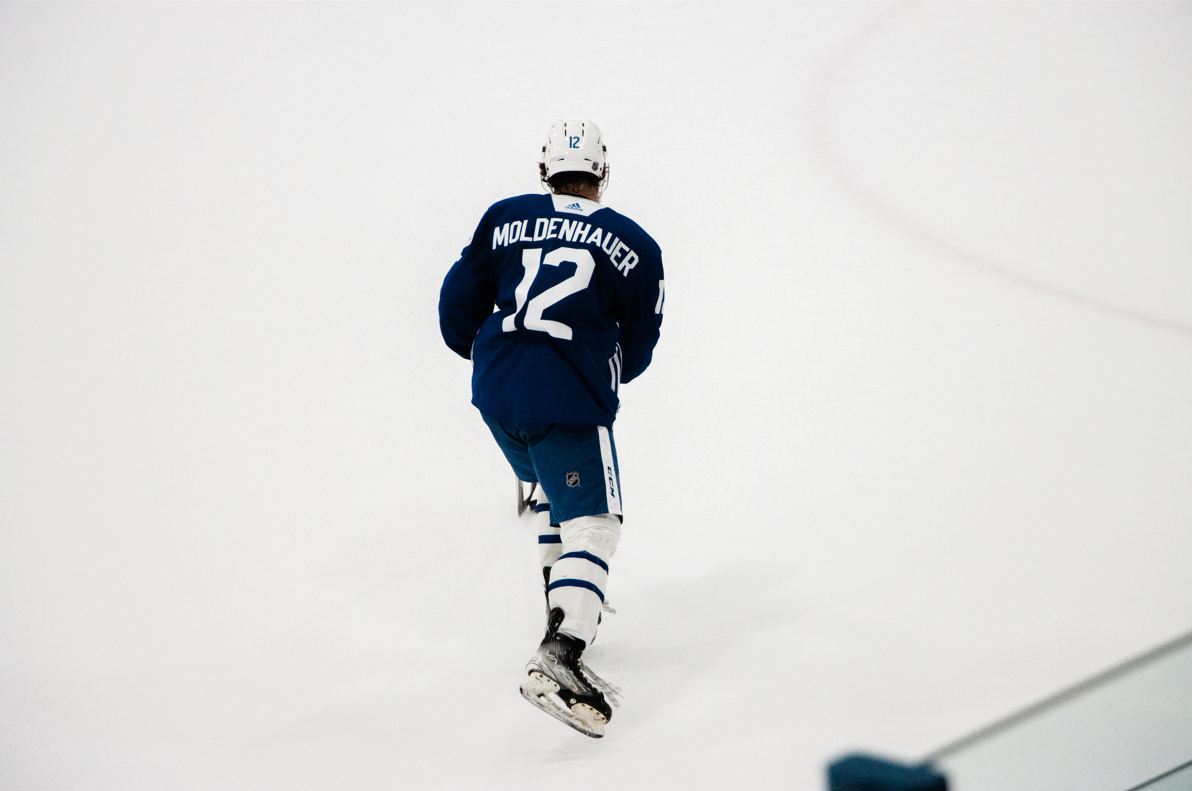 By Kyle Cushman
4 months ago
It was a much shorter Day 2 of Toronto Maple Leafs development camp in terms of the media availabilities, as much of the higher profile attendees had their availabilities yesterday.
Still, the likes of Ryan Tverberg, Nick Moldenhauer, William Villeneuve, and Max Ellis all had a couple of interesting tidbits in their brief meetings with the media yesterday at development camp.
For more from Day 2 of development camp, be sure to check out Nick Barden’s story from yesterday.

On his experience at Canada’s World Junior camp

“There was lots of things to take away [from World Junior camp], being around great players there. Driving to do more, ‘why not me’ the next time. Just working harder, using it as fuel.”

Tverberg’s emergence during the 2021-22 season was incredible to watch, as he went from a bottom-six player as a freshman to an offensive driver and Canadian World Junior camp invite as a sophomore.
As noted by Dr. Hayley Wickenheiser on Day 1 of development camp, Tverberg was the final cut for Team Canada heading into the original 2022 World Juniors. With the rescheduled tournament quickly approaching in August, it wouldn’t be a surprise to see Tverberg end up on the roster if any of the previous talents are not made available by their NHL team. Not bad for a seventh-round pick out of the OJHL.

“I just want to adapt and play against different styles of hockey players and use the ways that they’re teaching us. Time and space, more down low work, using that more in my game so that I can excel when I go back and play with my teammates.”

UConn had a fair amount of top talent leave the program after last season. It’s going to be a big task for Tverberg to show his skill, but also his leadership, to make that team competitive.

On standout skills from other players at camp

“A big thing I’ve noticed that a lot of the bigger guys do well is puck protection. Being a smaller player, moving forward I’m going to have to be really good with my puck protection. That’s something I’ve been trying to watch throughout the first few days and see what they’re doing really well and incorporate that into my game.”

“I’m going to spend the rest of the summer here after this camp to really dial in my fitness. It’s so important to hockey nowadays, just trying to get stronger and faster.”

One of the main concern with Villeneuve’s game when he was drafted was his lacklustre skating. He’s got a big frame at 6-foot-2, but is slight at under 180 pounds. Putting on muscle and getting a step quicker are two significant areas for Villeneuve to improve if he is to climb the depth chart over the next few seasons as a professional.

On the standout drills at camp

“Skating off of rims, working on corner play and cutbacks are a big part for my game. That is something I’ve really gotten a lot of use out of. Listening to the coaches, asking questions about leaning into guys, cutting back. Being a smaller guy, it’s a lot of help to learn from these people.”

“The development staff they have here, the opportunity, and the play style they have really fit my game. It was a no brainer when it comes to the people they have and the resources they have to help me grow my game.”