Nylander, Matthews combine for four points as the Maple Leafs shut out the Flyers 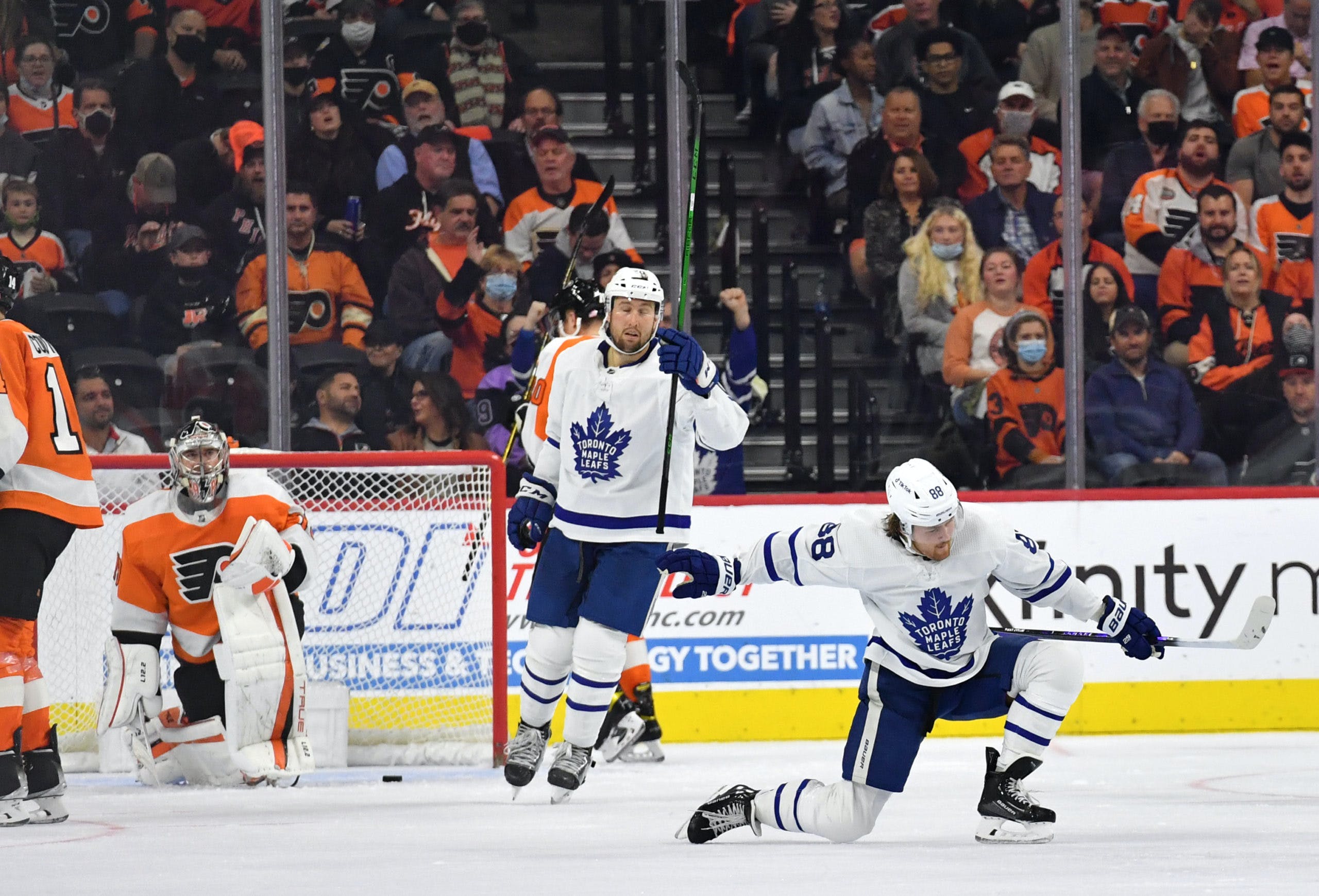 By Joseph Zita
1 year ago
After coming off a 5-1 loss to the Los Angeles Kings in their last home game on their five-game homestand, the Toronto Maple Leafs were on the road to take on a hot Philadelphia Flyers team who were 6-2-2 coming into tonight’s contest. Some game-time decisions were made with Toronto tonight that included John Tavares being deemed unable to play and Ondrej Kase being good to go tonight. With Tavares’ absence, Kirill Semyonov slotted in the lineup and made his NHL debut tonight on the fourth line with Jason Spezza and Wayne Simmonds.
The Maple Leafs had a better start to the first period this game and were in the Flyers zone for an extended period of time on a couple of shifts early in the frame but didn’t produce anything on the scoresheet. The Maple Leafs had their chances as did the Flyers but the score remained 0-0 despite there being three power-plays in the first 20 minutes (one for Toronto and two for Philadelphia).
The second period was more so of the same for both teams as they both shared their scoring chances back and forth and Toronto was called for another penalty, this time by Nick Ritchie who pulled the helmet off of Rasmus Ristolainen. Toronto killed off their third penalty of the game and then they found the back of the net off a Nylander tip from his toe a bit after. After they went up 1-0, it seemed like that sparked the Flyers because they basically took over the remainder of the second period and applied pressure in the offensive zone while having Toronto on their heels. The Maple Leafs did have their offensive zone time, but it felt like the Flyers were the better team after Nylander scored.
The Maple Leafs opened up the third-period kind of on their heels again as the Flyers were still applying pressure and creating chances but Campbell turned them aside. Toronto then got another shot on the power-play and this time capitalized on it with a nice shot from Nylander who received a nice pass from Nick Ritchie, yes, you read that right, and Toronto went up 2-0. The Flyers continued to apply the pressure but they didn’t have an answer for Campbell as they took an offensive zone penalty which gave Toronto their third power-play of the night where the Maple Leafs did score, but just seconds after Giroux skated out of the box.

Without John Tavares in the lineup for the Maple Leafs tonight against the Flyers, this game was going to be an important one for Matthews given that the teams’ second-line centre isn’t in the lineup and that Matthews and his line are going to have to be on their game tonight. Well, I guess you can say they were on their game as their line did combine for four points – even though two were on the power-play – and helped lead this team to a victory in Philadelphia. Matthews recorded two assists tonight on both Nylander goals and he now has eight points in his last five games.
But besides the offensive part of Matthews’ game tonight, he was pretty good defensively by breaking up some passes, backchecking to stick lift some Flyers that were trying to create some scoring chances in the Toronto zone, and all-around had himself a good game tonight. Although he didn’t find the back of the net, he was setting up his linemates all night with some passes that could’ve found the back of the net and increased his point total.

Arguably the Maple Leafs’ MVP this year with his consistency throughout the early part of the season, Nylander continued his scoring ways as he potted home two more goals on the road tonight and extended his point streak to five games where he has seven points in that stretch. His first goal tonight might be seen as controversial to some fans, given that it was “kicked” in but upon further review, it was deemed a good goal and Nylander gave Toronto a 1-0 lead. He was all over the puck on the offensive side tonight and he ended up scoring his second goal of the night in the slot on the power-play with a nice feed from none other than Nick Ritchie.
Nylander could’ve had himself a hat-trick late in the third period but lost control of the puck on the breakaway and ended up just firing it into Hart’s glove. All around, just like Matthews, Nylander had himself a good night and they did a good job tonight with the absence of John Tavares, who has been one of the hottest Maple Leafs as of late with the production he’s given this team.

After coming off a 5-1 loss to the Los Angeles Kings on home ice Monday night, Campbell bounced back in a very big way on the road tonight and picked up his second shutout of the season while making 36 saves en route to a 3-0 Maple Leafs win over the Flyers. He was stellar yet again tonight and made some very important saves for the team when Philadelphia started applying pressure in the offensive zone after Toronto’s first goal of the game and pretty much throughout the second half of the game.
There really isn’t much to say about Campbell and his performance tonight because it’s a standard Jack Campbell game from him for the Maple Leafs and he helped them, yet again to pull out an important win. He improves his record to 7-3-1 on the season with a 1.90 GAA and a .936 SV%. His workload will continue to be an important topic of conversation for this team given their goalie situation right now and the fact that there is a back-to-back this weekend, but nonetheless a very good performance from him tonight and he will likely get the start Friday night against the Flames in Toronto.

I didn’t really think anyone had a very bad game for Toronto tonight, other than a very slow and sloppy start from the Muzzin – Holl pairing, but they slowly got better and made a couple of good plays that could’ve prevented something worse. Although they did start the game getting hemmed in their own zone three or four times in a row – and that is something they must clean up going forward if they will remain a pairing – but as I said, I felt like they adapted to the game and got better as the night progressed. They ended the night with a combined + 4 if you want to look at plus/minus, but other than that, Muzzin was the only one who picked up a point which was an assist on the first Nylander goal of the night.
Uncategorized
Recent articles from Joseph Zita