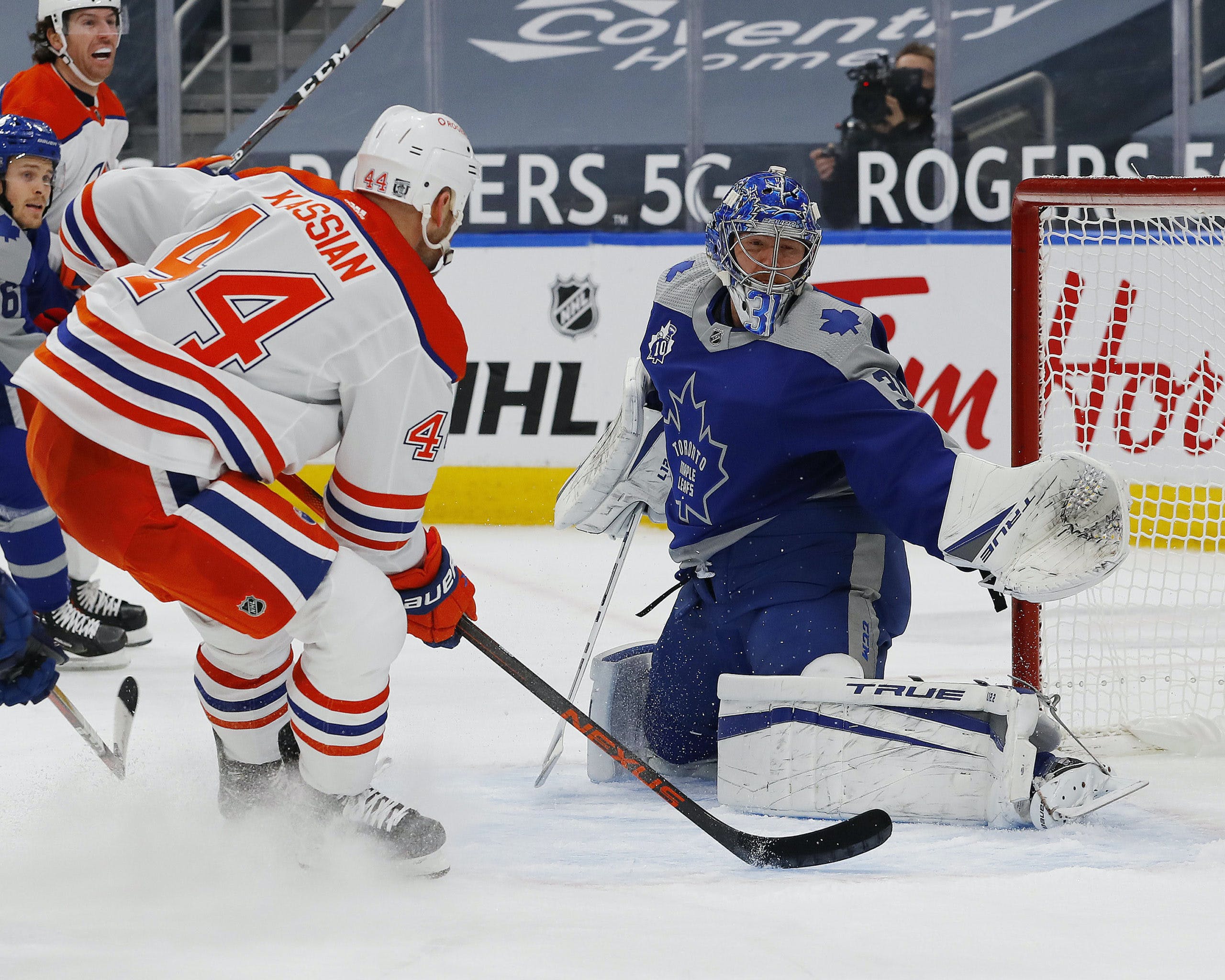 By Nick Richard
2 years ago
The Leafs and Oilers put on a show on Saturday night in a fast paced, tightly contested game that featured highlight reel moments from some of the game’s biggest stars. The Leafs battled back from a two goal deficit but came up short in a 4-3 overtime loss, bringing their record to 5-0-1 in one goal games so far this season.
Both teams had their legs from the get go and played at a furious pace to begin the opening period. The Oilers got the first good chance of the contest when a puck trickled behind @Frederik Andersen and @Mikko Lehtonen dove behind him to pull the puck off the goal line with his hand, leading to a penalty shot for former Leaf @Tyler Ennis. Andersen stayed with him the whole way, forcing a shot wide to keep the game scoreless and went on to make a handful of big saves to weather the early storm before @Dominik Kahun opened the scoring on an odd man rush.
The Oilers’ forecheck caused problems for the Leafs early and they struggled to move the puck out of their zone with possession but Toronto broke through late in the period with a strong forechecking effort of their own as @Ilya Mikheyev and @John Tavares forced a turnover in the offensive zone before @William Nylander pounced on it in front to tie the game.
It appeared as though the Leafs were going to escape the first period with the game tied despite the Oilers carrying the play for most of the frame, but Edmonton was rewarded with a go ahead goal in the dying seconds of the period after some diligent work down low allowed @Connor McDavid to find @Josh Archibald streaking to the Leafs net.
The Leafs looked to capture some momentum early in the second period and came close to tying the game as the Matthews, Marner, and Hyman trio created a couple of good scoring chances off of an extended offensive zone possession. Unfortunately for the Leafs, whatever momentum was generated by that shift immediately vanished when Nylander took an offensive zone penalty for the second straight game.
The powerplay wasn’t very old before Connor McDavid decided to do Connor McDavid stuff, taking the puck all the way from his zone and through the neutral zone before blowing by @Jake Muzzin on his way to roofing a highlight reel goal over a sprawling Freddie Andersen.
The Leafs’ biggest stars didn’t waste any time responding. Just minutes later Auston Matthews and Mitch Marner played give and go in the offensive zone before Matthews buried a shot behind @Mikko Koskinen from an almost impossible angle to cut the Oilers’ lead to 3-2. The goal extended Matthews’ goal scoring streak to five games, and his point streak to seven games.
Toronto’s good fortune continued on Matthews’ next shift when he drew a cross checking penalty against @Leon Draisaitl to send the Leafs to the powerplay. @Mikko Lehtonen recorded his first NHL point when his wrist shot from inside the blue line was deflected by @John Tavares and landed right on the stick of @Zach Hyman who had an open cage waiting for him.
It was a great response by the Leafs after going down by two goals less than half way through the game and they managed to hang on at the end of the period through a flurry of scoring chances by the Oilers as they made a late push to regain the lead going into the third. Freddie Andersen, in particular, came up big on a penalty kill after Lehtonen was called for a questionable holding penalty in front of his own net.
The third period tightened up a bit until @Kailer Yamamoto took a holding penalty in the offensive zone. The Leafs generated a couple of chanced on the powerplay but Koskinen stood tall, including a massive stop on Marner to keep the game tied.
Both teams seemed to settle into their defensive structure as the third period progressed and chances were limited on both sides until the dying seconds when Muzzin blew a tire just inside the offensive blue line, leading to an odd man rush the other way where Andersen made an incredible save to preserve at least a point and send the game to overtime.
Much like the first three periods, the overtime session started at a break neck pace. Nylander had the first good chance as he flew down the wing and took a pass from Tavares but Koskinen made a great save with Nylander bearing in on him.
It wasn’t long before the Oilers’ big stars got a chance of their own and McDavid made no mistake deflecting home a perfect pass from Draisaitl to send the Oilers home with their fourth victory of the season.

It wasn’t exactly a textbook goaltending performance throughout, but Andersen made numerous big saves over the course of the game and quite literally saved a point for his team with that massive stop on Josh Archibald in the dying seconds of the third period with the game tied.

It was a tough night for Muzzin as he was victimized by Connor McDavid off the rush for his first goal of the night and his gaff inside the offensive blue line late in the third likely would have cost the Leafs any chance at points tonight if it weren’t for Freddie Andersen bailing him out.

It wasn’t always – or hardly ever – pretty for Mikko Lehtonen at even strength but he looked comfortable manning the point on the powerplay as he earned his first NHL point. This one is a bit niche, but it’s a fantastic reference.

The Leafs have wrapped up their Alberta road trip and will head home with a 7-2-1 record as they get set to enjoy their first extended break of the season. The team will get some much needed rest and recuperation time before they get back to business at home against the Vancouver Canucks on Thursday night.
Uncategorized
Recent articles from Nick Richard