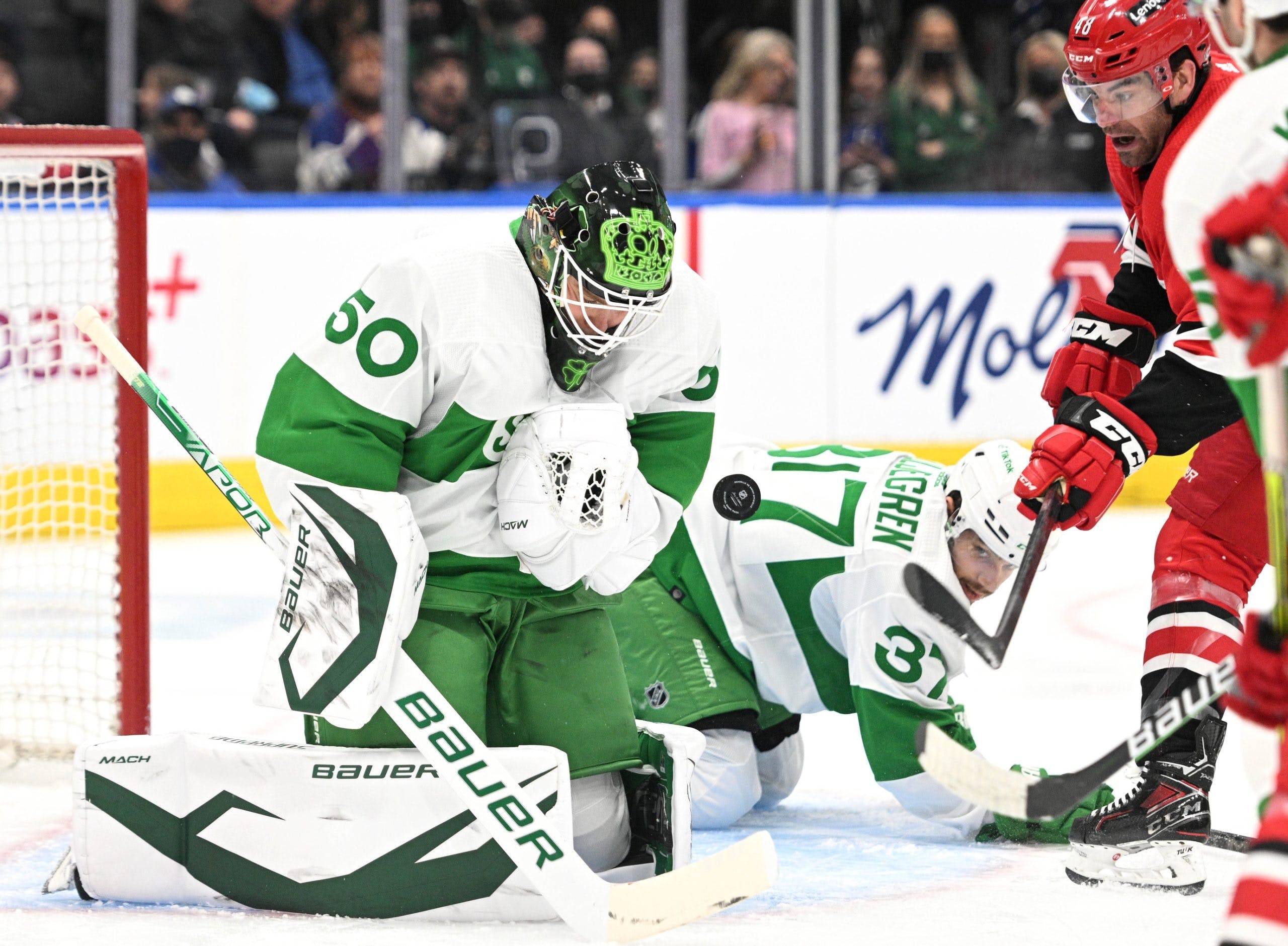 Photo credit:Dan Hamilton-USA TODAY Sports
10 months ago
Perhaps it’s a move that comes with an inexperienced goaltender between the pipes or maybe it’s the level of the opponent, but the Toronto Maple Leafs have taken a unique approach in their last couple of games.
On Tuesday night against the Dallas Stars, the Maple Leafs’ opponent got the first four shots on goal before they registered their first. It just so happened to be a goal.
On Thursday against one of the top teams in the NHL, the Carolina Hurricanes opened the game with an 11-1 advantage in shots on goal. They recorded the first five of the game on Erik Kallgren, who made his second NHL start for the Leafs.
It took seven minutes before Mitch Marner recorded his team’s first shot, a backhand from a far distance was easily handled by Maple Leafs goaltender Frederik Andersen.
“Playing against Carolina, it’s not the same as it is against a lot of other opponents, so a level of patience is going to be required,” Maple Leafs head coach Sheldon Keefe said after the team’s 3-2 victory. “I wasn’t overly concerned that we didn’t have a lot of shots. In fact, we talked about the fact that there is some benefits to it.
“You don’t let the goaltender on the other side get into the game comfortable. On our side, we gave up some chances and Kallgren doesn’t have a choice. He’s in the game. And once we tightened up a little bit, I think they had nine shots that came from the blue line and that really let our goalie get comfortable in the game. So, we just had to stay with it and plug some of the holes defensively.”
It’s an interesting approach. However, things could have gone off the rails quickly.
In the opening minute of the game, Kallgren was a bit out of position when he aggressively played Jesper Fast’s shot. The rebound went right to Brady Skjei, who skated around the goaltender and could have backhanded the puck into an empty net, had Ilya Lyubushkin not been there at the last second to tie up the Hurricanes defenceman’s stick.
But when your goaltender is making saves and you aren’t concerned about weak distance shots going in, this approach can work sometimes.
“I think I let up a bit more rebounds today, but other than that it was similar to last game,” Kallgren said of his start on Thursday.
In fact, after the initial shakiness of the start, Kallgren did settle in nicely. He helped spot his team a 2-0 lead and played an additional 44:09 of shutout hockey to go with his donut in his debut. Ethan Bear snapped the shutout streak after he beat him when he picked up a quick rebound off of Lyubushkin’s skate.
Outside of that goal and Vincent Trocheck finding a loose puck underneath him to cut Toronto’s lead to 3-2 with just 3.6 seconds remaining in regulation time, Kallgren was solid in goal for the Leafs tonight.
Ilya Mikheyev scored the only goal of the first period that made it 1-0 Toronto. Marner followed that up when he decided to shoot while carrying the puck on a 2-on-1 that beat Andersen.
“I’ve known him for a long time and in a lot of 2-on-1s where we’re playing each other, I’m not really shooting a whole lot against it,” Marner said.\
Shortly after Bear’s goal in the third, Ondrej Kase added what ended up being a much-needed insurance tally. He’s on a three-game goal-scoring streak, matching his season-high.
But again, Kallgren was sensational in goal.
His save early in the second period on Skjei helped keep the Hurricanes from doing more damage.
Now comes the interesting question. Did Kallgren do enough to keep starting? In normal circumstances, it’s hard to say. But these haven’t been normal times with the Maple Leafs dealing with one goaltender struggling to make a save while your previous starter is injured and was also struggling in the net.
If the Leafs are going to justify giving up shots, you really don’t have a choice but to put in the goaltender that has a higher likelihood of making the save.
And that is indisputably Kallgren. He improved to 2-0-1 this season with a .963 save percentage.
News