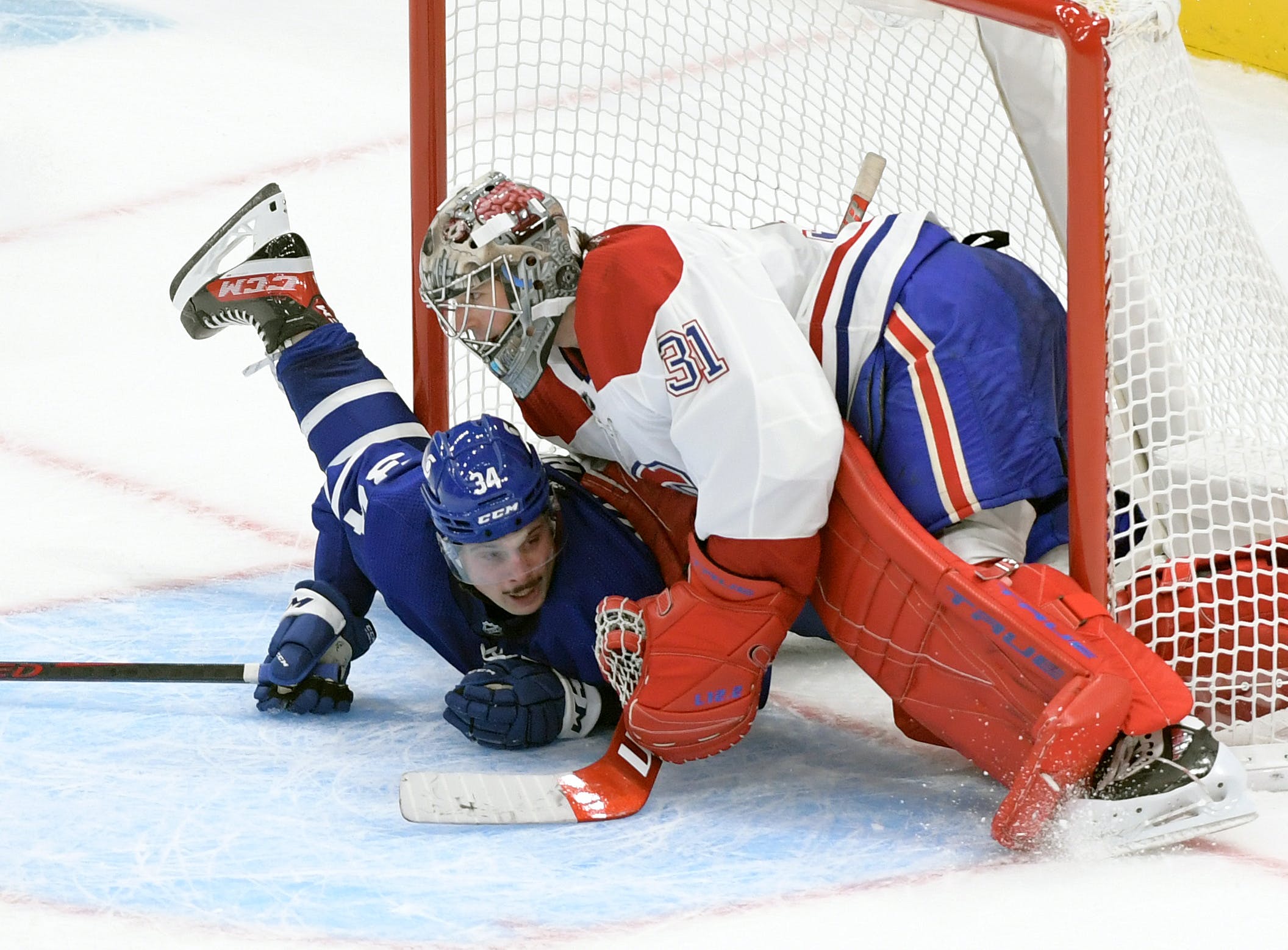 By Scott Maxwell
1 year ago
For the first time in over 40 years, the Toronto Maple Leafs and Montreal Canadiens are meeting in a playoff series. One of the league’s biggest rivalries finally gets a chance to show it’s true colours again after years of one team being good while the other one was not. But, how do the Leafs and Habs match up against each other? The Habs have more weaknesses than strengths, especially matched up against this Leafs team, but that doesn’t mean they can’t give the Leafs trouble and squeeze out a series win.
Let’s take a deep dive into the breakdown of this team and how it matches against the Leafs. A couple of days ago we got a bit of a look into what the Habs may look like in Game 1 (with the exception of Shea Weber), so we’ll be using these lines as our general base for this analysis.
https://twitter.com/JohnLuTSNMtl?ref_src=twsrc%5Etfw%7Ctwcamp%5Etweetembed%7Ctwterm%5E1393590518928523266%7Ctwgr%5E%7Ctwcon%5Es1_&ref_url=https%3A%2F%2Ftheleafsnation.com%2F2021%2F05%2F17%2F2021-playoff-preview-how-do-the-leafs-match-up-against-the-canadiens%2F

The forward group is probably the biggest difference between these two teams. The biggest advantage that the Leafs have over the Habs up front is a larger surplus of gamebreaking talent. The Leafs can run out Auston Matthews, Mitch Marner, William Nylander, John Tavares, and even Zach Hyman, while the Habs can at best trot out Brendan Gallagher and Tyler Toffoli on a shooting bender.
However, a lot of what generates the Habs offense runs through two different strategies: shots off the rush, and shots from the point. According to Corey Sznajder’s tracked data, the Habs generate the 11th most shots off the rush, utilizing some of their speedy wingers to generate their chances, and playing conservative hockey to wait out opponents until they make mistakes to create breakaways and two on ones. If that doesn’t work, they cycle the puck and generate shots from the point and try to create havoc in front of the net, part of the reason why they rank 4th in the league in shot attempts for per 60 minutes, but only 10th in expected goals for per 60 minutes.
That’s where that top line for Montreal works magic against other teams, and why Brendan Gallagher is the key to that line’s success. Not only is he one of the Habs best players at generating offense off the rush, his net front presence and ability to generate high danger scoring chances meshes well with the Habs game plan, and it’s part of the reason why he has the 13th highest even strength goal scoring rates since 2017-18.

Not just that, but he’s a possession phenom, and more than capable of playing against top competition, and doing it well. He was sixth among forwards in 5v5 expected goal share, and seventh in 5v5 shot attempt shares, and his impact was really felt when he was injured. Before he got hurt, the Habs were 17-9-9 and were second in both expected goals and shot attempt shares. After he got hurt, the Habs went 7-12-2, were 22nd in expected goals share, and 14th in shot attempt share. Tatar and Danault also see a bit of a drop without him, as they see their expected goal share drop nearly 18% and 16%, and both see their shot attempt share drop 8% when Gallagher isn’t on the ice. This is a line that has an expected goals share of 69.03% and a shot attempt share of 63.01% with Gallagher there, so the fact that it takes that much of a hit without him shows his impact.
After that top line, it slowly trails off a bit more. The second line of Toffoli-Suzuki-Armia also employ this strategy well, but not to same extent that the first line does, and a lot of their offense has come through Toffoli’s career year (which also comes with a lot of luck). That third line of Perry-Staal-Anderson has only seen nine minutes of ice time together, but they have not performed well at all when they have, with a 14.74% expected goals share and a 23.25% shot attempt share. It’s very clear that line is together has some sort of physical, veteran presence to intimidate the Leafs, which is why they opted for Staal and Perry over Caufield and Kotkaniemi. If they match up against the Leafs top six, it probably won’t work. The fourth line has seen a lot more ice time together, and have done about what you’d hope from a fourth line, getting positive possession numbers, but much closer to 50% than the top six.
The Habs don’t have the gamebreaking talent that the Leafs do, but what they do have is solid depth that is very good at possessing the puck, and generating their offense off of that. The good news for the Leafs is that both lines have done quite poorly when matched up against Matthews and Marner. The bad news is that they’ve done quite well against Tavares and Nylander. If Keefe wants that top six to excel, it’d be in his best interest to throw that duo against the Habs third line while he uses his own third “shutdown” line to match up against whichever line doesn’t get Matthews.
Not to mention the Leafs actually match well against the Habs style. Remember when I said the Habs were 11th in rush shots? The Leafs are 7th, so this will be a hectic series in that regard. The biggest difference (and best matchup) is that the Habs love their point shots, while the Leafs generate their chances closer to the front of the net. Meanwhile, the Leafs love keeping any shots to the outside, and know how to keep them out, so the Habs point shot offense won’t be as much of a problem for them.

I’m not going to go as in-depth with the defense because it’s more or less the same as the forwards in some sense. Assuming the pairings are Edmundson-Petry, Chiarot-Weber, and Romanov-Kulak, all three pairs have found good to great success at driving shot attempt shares and expected goal shares, as the top pair plays well against tough competition at 54.7% and 54%, the second pair is slightly worse but still effective at 52.82% and 53.29%, and the bottom pair crushes the easy minutes at 56.55% and 57.04%. The narrative that they drive a lot of the shot attempts also rings true, as only Kulak finds themselves outside the top 10 among Habs players at individual shot attempts.
Like Gallagher with the forwards, a lot of the Habs defense rides through Petry’s play and how much he can dominate competition, and to a lesser extent Shea Weber. Petry’s 12 goals this season means that you probably can’t just look off his shot attempts because he can be scoring threat, and Weber’s booming one timer is well known. Weber isn’t as effective at transitioning and possession, but he does it well enough on this Habs team that it more or less helps the team.
Chiarot-Weber got the matchup against Matthews this season, and while they did a better job than Edmundson-Petry, the expected goal share was still not good, especially if you’re dealing with the best goal scorer in the league. Edmundson-Petry got the Tavares matchup and did it quite well, but that might be more credited to the team defense as a whole than just those two defensemen.
Where the Leafs can cause problems with this blue line is capitalizing on that blue line’s lack of foot speed. Petry is the only one that really stands out as an exceptional skater, so the speed of players like Matthews, Marner, and Nylander will probably excel at targeting that to create chances.

There was a time where Carey Price was one of the best goalies in the league. We are no longer in that time. While he’s certainly capable of standing on his head and winning his team a series or two (you’d have to go all the way back to 2012-13 to find a bad playoff run from him), he’s been pretty mediocre these days, with only one season in the last four years with a save percentage above .910. A lot of the mainstream media will tell you that he’s still one of the best in the league, but he hasn’t been that in a long time.
The same goes even further in his play against the Leafs. In the past four seasons, he’s only had one season where he’s put up higher than an .882 save percentage in a season series against the Leafs, and that was in 2019-20 where he posted only a .912 save percentage in three games, and all three were against a Leafs team that was on the second half of a back-to-back.
As far as the stats go, Campbell is the better goalie in this series, especially when you consider the fact that he’s playing behind the better team, and Price will be facing the greater shooting talent. The only advantage Price has over Campbell is experience, but every goalie doesn’t have experience until they do.
That said, goaltending is voodoo is a saying for a reason, and there’s nothing stopping Price pulling off a rerun of his former self and winning the Habs this series (he did do it last year against Pittsburgh, after all). But, at 33 years old, his chances of recapturing that magic is less and less, especially when he has played just one game in the last month, and that was an AHL conditioning stint where he posted an .867 save percentage against the Toronto Marlies (who haven’t really been good this year).

I’m not going to tell you that the Habs are this terrible team that shouldn’t be in the playoffs, because there are some things that they actually excel at that contributes to their success. The problem is that a lot of those things, the Leafs do better or it works to their advantage.
The Habs biggest advantage might be that they have a mental edge on the Leafs considering their playoff experience, but that seems like a hurdle that the Leafs will probably overcome, or at least have to at some point. And once they do, they probably won’t be stopped for years.
So, the Habs might outplay the Leafs in shot attempts or expected goals on some nights, but it’s hard to see a lot of nights where they outscore the Leafs. They’ll basically need the Leafs special teams to stay dry, and Carey Price to work another miracle for them to really pull it off. Not impossible, but not likely.
Then again, who knows. This is the Leafs we’re talking about.
All win-loss and special team percentage stats are courtesy of NHL.com.
All advanced stats are courtesy of Evolving Hockey.
All microstats are courtesy of Corey Sznajder.
Uncategorized
Recent articles from Scott Maxwell