Pontus Holmberg is ready to kickstart his NHL career with Leafs 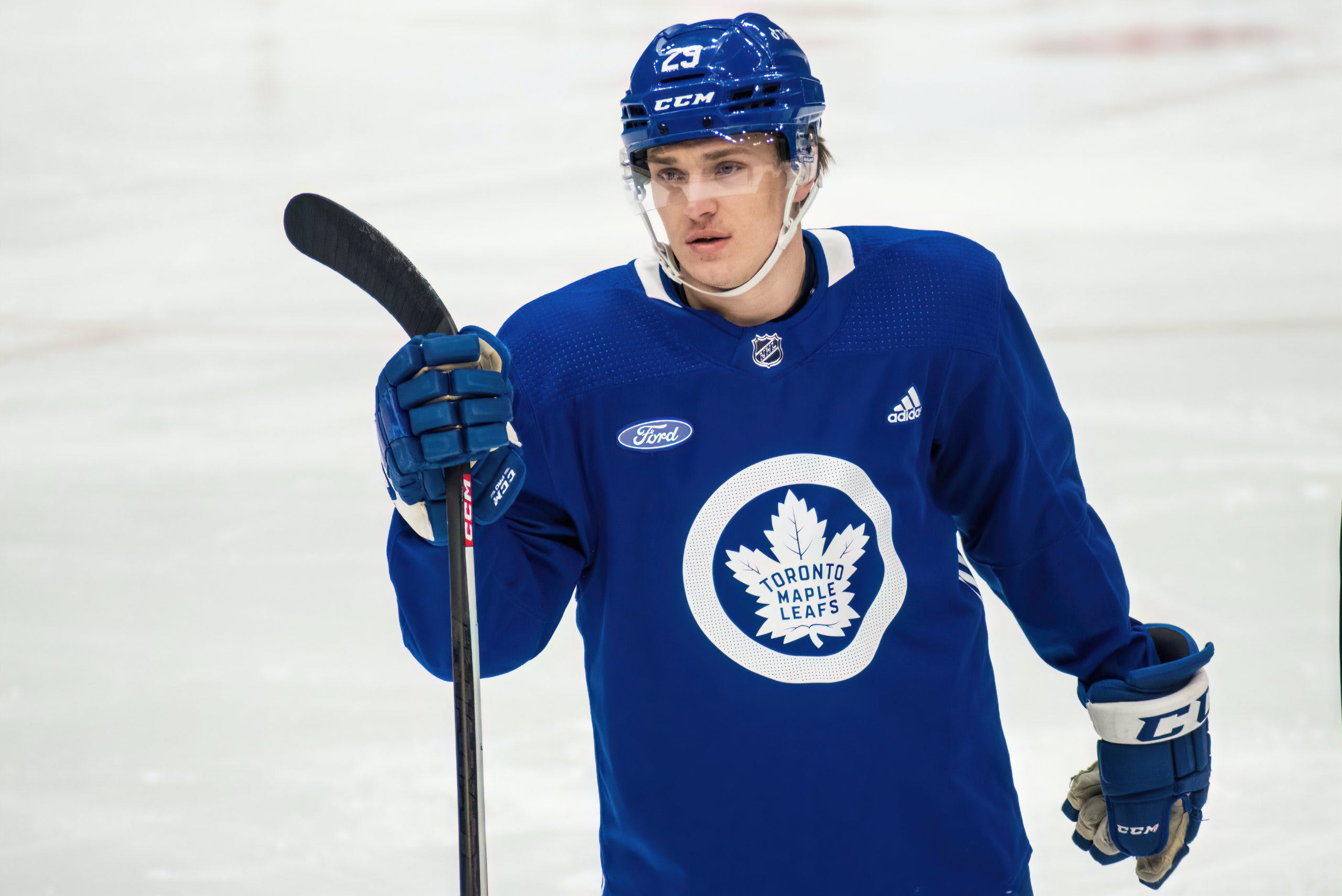 By Steven Ellis
1 month ago
If you’ve followed enough Toronto Marlies hockey this season, you know how snakebitten Pontus Holmberg has been.
He’s had his fair share of chances, and it’s not like it’s due to a lack of trying. But he has just two assists through seven games while averaging around two shots a game. Nothing spectacular by any means, but his value goes beyond scoring.
“He’s still pissed he hasn’t scored yet with the Marlies,” defenseman Rasmus Sandin said.
Holmberg was anything but angry during Wednesday’s morning skate, though. He’s tabbed to make his NHL debut tonight with Pierre Engvall and Calle Jarnkrok, an all-Swedish line. Coach Sheldon Keefe wanted that group together to help Holmberg feel more at home since his English isn’t that great.
The Leafs signed Holmberg to an entry-level contract after the 2020-21 season in Sweden. He had a career-high 41 points in 46 games with Vaxjo last season before finishing the season with the Marlies, scoring two goals and four points in six games. Holmberg then had a strong camp with the big club and stayed with the Leafs right until the final round of cuts, indicating that the coaching staff valued him as a potential call-up candidate.
The Leafs needed a center deeper in the lineup, and with an abundance of wingers, Nicholas Robertson became a surprise scratch on Wednesday. That allowed Holmberg to get called up on Tuesday, with veteran Wayne Simmonds getting sent down to the Marlies. Now, four years after getting selected 156th overall in the sixth round, he’s set for the most significant moment of his career.
Like Keefe said, Holmberg’s English isn’t great, so he declined to chat before the game. But he was all smiles during the optional morning skate, even when he missed an easy scoring opportunity by a million miles midway through. And it’s an opportunity Keefe is excited about.
“A lot of these guys, especially those coming up from the minors, they’re gonna tell you that they understand everything. We want to make sure that he’s clear and that’s part of the reason why his linemates are what they are tonight. One, to make him as comfortable as possible but I also think he compliments those guys well, too.”
While Holmberg did see some scoring success late in his SHL career, the 23-year-old has made it a habit of working hard, playing a strong defensive game and setting up his teammates. His 2020-21 season, in particular, was incredible. After showing he was capable of more ice time, he quickly found himself moving up the lineup and helped Vaxjo win the league title after scoring a league-leading seven goals and 14 points. He was named playoff MVP and Swedish forward of the year – not bad for someone that went undrafted in his first year of eligibility.
Early SHL footage shows him being a bit hesitant to shoot the puck, but that started to change as he got more comfortable against men. He only eclipsed the 10-goal mark once – 11 in 46 games in 2021-22 – and it’s his reliable two-way play that stands out, not only to scouts, but to his teammates.
“He’s smart with the puck and makes really smart decisions,” defenseman Rasmus Sandin said. “He does everything. He creates chances to score, not only for himself but for others.
The Leafs are in the midst of a four-game losing streak that, obviously, has sent the fanbase into hysteria. So there’s significant pressure on the club to get things moving in the right direction, and that’s why they’ve tried a multitude of different options in the bottom six to find the right fit. This might be a one-game audition for Holmberg before heading back on the road with the Marlies, or maybe he ends up sticking. It’s too early to say right now, but getting that boost from playing with the big club could be exactly what he needs to find his confidence after a frustrating few games at Coca-Cola Coliseum.
Either way, have fun, kid.
Editorials
Recent articles from Steven Ellis