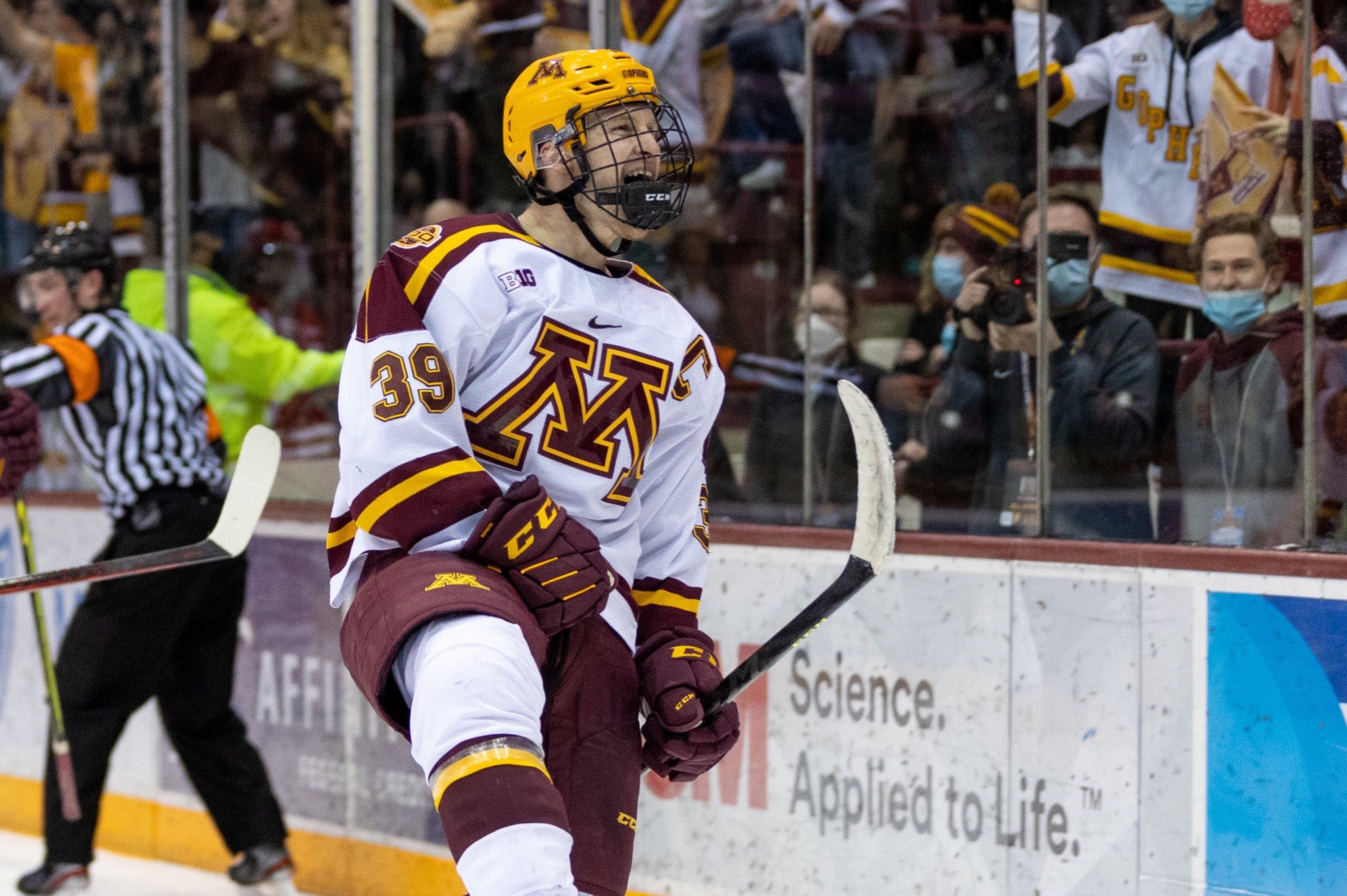 By Nick Richard
10 months ago
With the trade deadline in the rearview mirror and rosters mostly set heading into the stretch drive of the season, NHL front offices have shifted their focus to the college free agent market. In fact, a few names that I had planned to include on the list below have already signed on with NHL clubs after having their NCAA seasons end early.
For many of the biggest names available, there is still the matter of the NCAA tournament and the pursuit of a national title to take care of before they take the next step and begin their pro careers. The Leafs already have a handful of prospects participating in the tournament so be sure to check out Kyle Cushman’s Leafs fan guide to the NCAA Tournament:
Leafs fan guide to the 2022 NCAA Men’s Hockey Tournament
The Leafs dipped into the NCAA free agent pool last season, signing forward Alex Steeves out of Notre Dame. Steeves has had a solid first year of professional hockey as one of the Marlies’ top scorers and even earned a brief NHL stint earlier this season. He is still just 22 years old so he signed a bit younger than most undrafted college players, and he could eventually be a regular depth contributor for the Leafs.
Outside of Ben Meyers and perhaps one or two other names, NHL clubs will be taking flyers on potential depth options when they pursue college free agents this spring. Finding impact NHLers in the NCAA free agent market is rare but for nothing more than a few bucks (by NHL standards) and a contract slot, it is an efficient way to supplement organizational depth.
With that in mind, let’s have a look at some players that the Leafs and other NHL clubs are likely to pursue over the next few weeks.

Meyers is a teammate of Leafs prospects Matt Knies and Mikey Koster at the University of Minnesota and figures to be the crown jewel of this year’s NCAA free agent class. Meyers and Knies were actually linemates for pretty much the entire season, forming one of the more formidable duos in college hockey. He probably could have gone pro last season but opted to return to college for another year and has only solidified his resume for interested NHL teams.
Meyers leads the Gophers in scoring heading into the NCAA Tournament and has been one of the best 200-foot players in the entire NCAA all season. He plays the game at a high pace, works hard in all three zones, and has the skill to capitalize on chances or create them for his teammates. Meyers’ speed and vision allow him to create from the outside and off the rush, and his shot can beat goaltenders from distance, but he does his best work off the cycle and in the dirty areas around the net.
His strong play for Minnesota this season also earned him a spot on the US Olympic roster alongside Knies where he managed two goals and two assists through four games.
Of all the available college free agents, Meyers is the most likely to step directly into an NHL lineup and contribute right away. Set to turn 24 in November, he has the potential to carve out a career as a middle-six two-way forward. Rest assured, his phone will be blowing up with calls from NHL clubs the minute Minnesota’s season comes to an end.

Trivigno may not have NHL size at just 5’8″ and 160 pounds but he almost undoubtedly has NHL caliber skill. He has led UMass in scoring in each of the last two seasons, earned Frozen Four MVP honors after leading the Minutemen to a national title in 2020-21, and he is one of the top scorers in all of college hockey this season.
He is undersized but tenacious, relentlessly hunting pucks on the forecheck and disrupting opposing possessions. Trivigno is able to generate offense through hard work off the puck, quickly turning contested situations into chances for his team. His offensive toolkit is well-rounded and he can make plays under pressure but he doesn’t have blazing speed for a player his size and that will be his biggest hurdle at the pro level.
Despite his physical limitations, there will be NHL teams willing to bet on his skill, smarts, and work ethic.

Livingstone is a 22-year-old right-handed defenceman who has played a key role on the top team in college hockey this season. He has the size NHL teams covet as well, standing at 6’3″ and weighing in at a shade over 200 pounds.
The British Columbia native is a well-rounded blueliner who makes a strong first pass, has decent mobility, and his heavy shot makes him a scoring threat from the point. He shows patience and composure with the puck on his stick, both on the breakout and at the offensive blue line, and he maintains strong gaps in defensive transition.
Like most college free agents, Livingstone is no sure bet but he has the tools to grow into a capable NHL defenceman with continued development.

The backbone of one of the NCAA’s top teams this season, Bussi combines athleticism with a 6’5″ frame to shut down opposing scoring chances.
He isn’t the most technically sound netminder but he takes up a lot of net and has good reflexes and recovery abilities for a player his size. His height also helps him to track pucks through traffic while maintaining strong positioning between the pipes.
Bussi will need to continue to refine his technique and become more efficient with his movements in the crease but his combination of size and athleticism is sure to draw interest from NHL clubs.

A teammate of Bussi’s at Western Michigan, Frank has been perhaps the most lethal goal scorer in college hockey this season, tallying 26 goals through 36 games heading into the NCAA Tournament.
Frank is a strong skater who plays with good pace but most of his value comes from his shooting ability. He has the ability to quickly transition from receiving a pass to loading up his deadly release, and he seems to have decent spatial awareness in the offensive zone.
He may never be the main driver of a line in the NHL but Frank’s speed, tenacity, and finishing ability make him an intriguing project who should garner plenty of interest.

Ford isn’t the most dynamic offensive talent but he is a coach’s dream due to his competitiveness and strong two-way game. He has put up decent numbers at Providence this season and plays a physical brand of hockey, showing potential as a bottom of the lineup energy player at the pro level.
He isn’t the biggest player and his skating grades out as average or slightly better so he will need to rely on his intelligence, physicality, and responsible defensive game to make up for his offensive limitations. That said, Ford is still just 21 years of age so there is some runway left for him to further develop his game.

The son of longtime NHLer Mike and brother of 2021 first-round pick Cole, 24-year-old Owen Sillinger has been one of the highest scoring players in all of college hockey this season.
He obviously doesn’t have the upside that his brother does or he wouldn’t have gone undrafted and spent four seasons at Bemidji State but he does possess some similar traits in the ways that he produces offense. He has good timing and an ability to find open space in the offensive zone, getting himself into scoring areas in and around the slot area. Sillinger also has an edge to his game and finishes his checks with a purpose more often than not.
His ceiling may ultimately be that of a bottom-six NHL forward who can provide energy and a bit of secondary offense but his college track record should earn him a contract somewhere.

A captain for one of the nation’s top teams, Blankenburg has had plenty of eyes on him over the last couple of seasons as he has spent most of his time playing alongside 2021 first overall pick Owen Power.
Blankenburg is undersized but defends well at the college level, proactively taking away time and space with good positioning and a dexterous stick. He excels on puck retrievals with his mobility and slick hands but can sometimes be forced into poor decisions under pressure – an area of his game that he will need to continue to improve.
His offensive skill level doesn’t necessarily stand out but he activates with intelligence and forces opposing defenders into difficult decisions of their own. Blankenburg may be a longshot to carve out a regular NHL role but you don’t have to watch him very long for his upside to be evident.

Stevenson missed what should have been his freshman season with the Ivy League schools not playing in 2020-21 due to the pandemic, but he has made up for lost time this season. Through 23 games for a very weak Dartmouth team, he managed a 2.70 GAA and a .922 save percentage.
Stevenson has a projectable frame at 6’4″ and combines good athleticism with strong body control in the crease. He makes good reads and tracks pucks through traffic to stay ahead of the play but will need to continue to add quickness and improve his angles as he matures.
Between his final season in the BCHL and his first year of college hockey, Stevenson seems to be on an upward trajectory and his impressive season at Dartmouth has made NHL teams take notice.

It’s sounding more and more like Gaber plans to return to North Dakota for his junior season but he has an outstanding season and you can bet he’ll have ample opportunity to turn pro if he so chooses.
Another undersized but tenacious scoring winger, Gaber plays with good pace and energy on every shift. He is a dual offensive threat who distributes the puck efficiently and gets himself into scoring areas where he can make use of his shot.
Gaber already has solid puck protection abilities for a player who checks in under 5’10” but perhaps another year of seasoning at the college level will make him even stronger and improve his chances of success at the pro level.
Honourable mentions: Zach Metsa (Quinnipiac), Maxim Andreyev (Cornell), Nick Poisson (Providence), Derek Daschke (Miami-Ohio), Marshall Rifai (Harvard), Jacob Bengtsson (Lake Superior State), Max Ellis (Notre Dame), Jackson Pierson (New Hampshire)