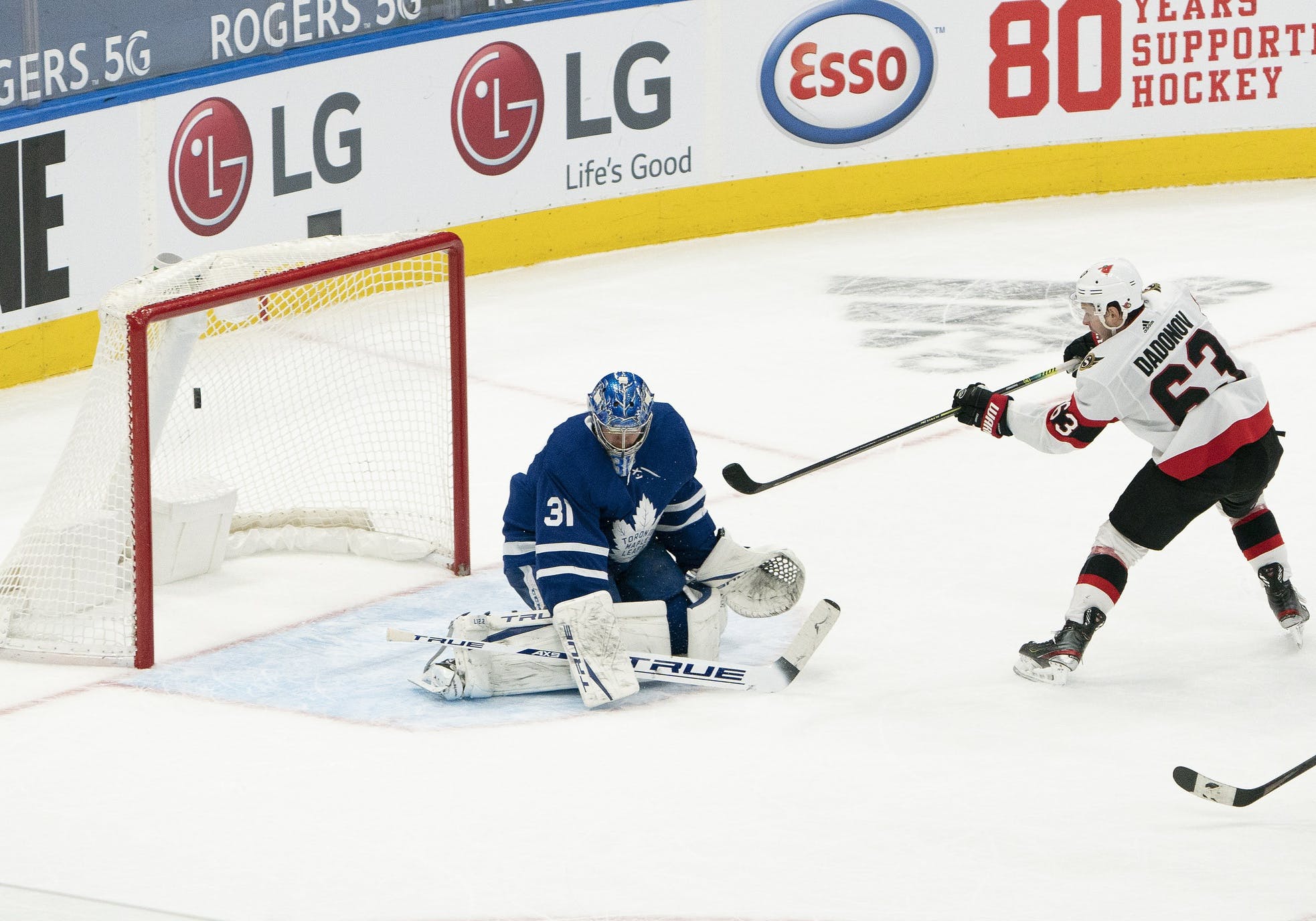 By Michael Mazzei
1 year ago
I hate to break this to you, but last night really did happen. We really did witness the Toronto Maple Leafs blow a 5-1 lead to the last-place Ottawa Senators before losing 6-5 in overtime. Here’s the worst part: it’s not the most embarrassing blown lead for Toronto since the turn of the millennium.
Believe it or not, this is not the first time the Leafs had a big lead over their opponent only to let it slip away in spectacular fashion. Rarely does Toronto recover and win the game, but often fans are left with feelings of anger and sadness. Then they go through weeks, months, and years with the continued dread of questioning why they chose to support such a cursed franchise.
And because these things have continued to happen solely to the Leafs, I was compelled enough to make this graphic:
It got me wondering what really was the worst blown lead the team was on the receiving end of and which game do fans point to when their therapist asks when the pain first started. So I’m going to try and do just that, with the acknowledgment that I am surely going to miss a few of them. Without further delay, let the suffering commence!

In this instance, the Leafs didn’t blow a lead in incredible fashion for all the world to see. Instead, they blew a glorious opportunity to take two of the easiest points a team could muster after the Carolina Hurricanes had to turn to the emergency backup goalie. It takes a special type of bad to do what the Leafs did that night, which is only scoring two goals on a Zamboni Driver who works for the organization. Credit does go to the Hurricanes who did a masterful job defending the net and making life miserable for Toronto to generate more offence. But the fact remains that they lost to a Zamboni Driver who works for them.

Three days after spanking the Winnipeg Jets 7-2 in the season opener, the Leafs jumped out to a 5-1 lead over the Rangers late in the first period and appeared well on their way to another blowout victory. But late in the first, Kevin Shattenkirk scored to cut the deficit to three and gave New York some momentum that they used to score thrice in the second period to tie it up. Now the reason this one is so far down the list is obvious: the Leafs ended up winning this game 8-5 following a three-goal barrage of their own in the third. But that game was a clear warning sign that the team still had a lot of work to do before they could be considered true contenders.

It’s the afternoon game that Leafs fans will never forget for a long time. Before the contest was five minutes old, Toronto was ahead 3-0 and had shown Carolina no mercy. However, the Hurricanes marched on and gave the Leafs fits by scoring five straight up until the end of the second period, with the most egregious error came from them scoring three times in just over a minute late to blow the game wide open. Luckily this story has a happy ending as Toronto was able to do the same in the third on route to an 8-6 win, capped off with that @Mitch Marner goal off the faceoff you’re probably thinking about right now on. As someone who was in the building that day, I can attest that the emotions I went through were quite something.
Unfortunately, this will be the last time we go over the times Toronto blew it but still won. Time to amplify the pain!

Just before the Leafs had the 18 wheeler fall off a cliff, they were wrapping up a strong month of January with a match against Pittsburgh. And after back-to-back goals from @Tyler Bozak and @Clarke MacArthur to put them up by three, there was reason to believe this team had what it took to be a playoff contender. Three straight goals from the Penguins tied things up and they went on to win the game in a shootout. So while this is still a blown lead, it’s a regular-season game that did nothing more than injure their pride. Though it does get bonus points for it preceding the February collapse that followed.

Over a year after the previous game, the Leafs yet again blew a three-goal lead to the Penguins in Pittsburgh. Why this one gets the nod over the other is because of how they did it. For the final 25 minutes of the game (including overtime), they did not record a single shot on goal and let the Penguins dictate the play for the remainder of the contest. It’s hard to put the onus of this one on @Jonathan Bernier since he made 43 saves on 48 shots against, but the defence in front did him no favours.

This was @Michael Hutchinson’s first start of the 2019-20 campaign and it set the tone for his season for all the wrong reasons. About five minutes into the third, @William Nylander scored to make it 4-1. But @Jonathan Drouin got one back mere seconds later that opened the flood gates for Montreal to pull ahead 5-4. An @Auston Matthews goal was able to somewhat salvage this game and give Toronto a point, but they still went on to lose 6-5 in a shootout and gave fans prolonged fear whenever Hutchinson would get another start.

The most recent addition to the long list of egregious blown leads jumps all the way up to number five on the list. It’s not so much that the Leafs allowed five straight goals including the overtime winner that makes this loss horrific, it’s the fact that the team that did it to them was dead-last in the NHL prior to puck drop. Leafs fans will not be able to sleep at night for years thinking about how this game got away from the team.
Related

After the 2016 NHL Draft came and went, Leafs and Jets fans debated for hours on end which team got the better player and whose career will prove to be more successful. In the first regular-season matchup between Matthews and @Patrik Laine, it was Winnipeg who got the ammunition for their side of the debate. With Toronto up 4-0 midway through the second period, the Jets proceeded to score five straight tallies, ending with Laine’s hat trick goal in overtime to secure the win. It’s one thing to blow a four-goal lead on the road, it’s another to have one of the players on the opposition score three times on you. It’s a hat trick Leafs fans wish to forget but can’t.

While the previous game was embarrassing on its own, the exact same scenario happened four years later in a playoff game. This time it was against the Columbus Blue Jackets and @Pierre-Luc Dubois was the guy that completed the hat trick in overtime. What makes this loss extra upsetting is that it overshadowed Nick Robertson’s first NHL goal along with a rare instance of @Cody Ceci actually beating a goalie. While this loss wasn’t a series-deciding game, it put the Leafs in a position where they needed to win the next two games in order to keep their season alive. They were able to pull off a three-goal comeback of their own the next night but laid a stinker in the deciding game.

The oldest game on this list is one that continues to haunt Leafs Nation after 20 years. Toronto had what seemed to be a comfortable five-goal advantage after Tie Domi scored just under three minutes into the third. But St. Louis somehow found life and got the game back to even with five goals in the third, two of which were on the power play. Just 18 seconds into the extra frame, Jochen Hecht scored the winner and cemented one of the worst collapses in a regular-season game of the 21st century. Fans at the time didn’t know it, but it would be the opening act for the two decades of spectacular Toronto losses that would follow.

Come on, was it really going to be anything else? You don’t need me to tell just how embarrassing this game truly was for the team because you probably already know the circumstances of that game. If you don’t, here’s the abbreviated version: In their Game 7 matchup against the Boston Bruins, the Leafs blew a three-goal lead and lost the game in overtime with @Patrice Bergeron scoring the winner. This game was the defining moment of the @Phil Kessel/@Dion Phaneuf era and it is one that will forever torment the minds of the Leafs fans. Unless they somehow pull off an even worse collapse in the playoffs (say Game 7 of the Stanley Cup Finals), nothing will top this masterpiece of incompetence.
All stats unless otherwise noted are from Hockey-Reference.com.
Uncategorized
Recent articles from Michael Mazzei