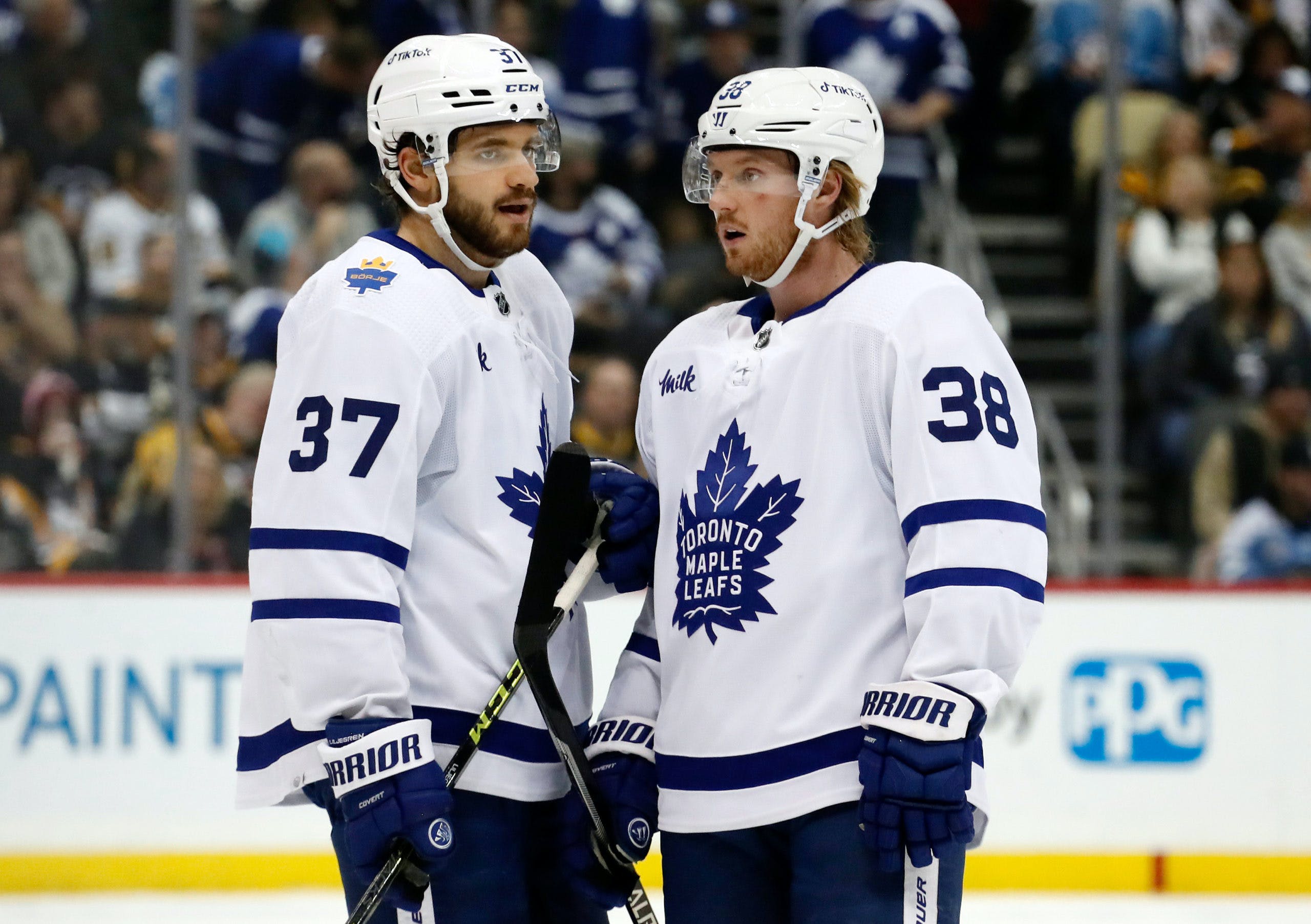 By Nick Barden
29 days ago
The Maple Leafs have returned to practice after a much needed day off on New Year’s Day following a three-game road trip.
Monday’s first order of business before practice began: announce that Joey Anderson has been loaned back to the Toronto Marlies.

The 24-year-old was called up to the Maple Leafs on December 9th after scoring 19 points in his first 21 games in the AHL. He joined the Marlies for practice on Monday, skating on a line with Bobby McMann and Logan Shaw.
“Just keep working.” Anderson said of the biggest takeaway from being up with the Leafs. “I think I put in good minutes up there and played well in the opportunity. I think there’s things you just can’t control and just come down here and play as good as I can with a good attitude.
“And keep working my way to be a regular up there.”
Anderson had a good stint up in the NHL, playing bottom-six minutes and being reliable in the defensive end. This move has probably more to do with giving Dryden Hunt a shot more than anything else.
Speaking of the 27-year-old, he remains on Toronto’s fourth line alongside Zach Aston-Reese and Pontus Holmberg.
There were no changes to the forward group on Monday, but there is a familiar face returning to the Maple Leafs’ blueline. And his name is Rasmus Sandin.
The 22-year-old has been out since December 20th with a neck injury and will rejoin Toronto’s defence playing alongside Timothy Liljegren. The other changes see Morgan Rielly back with TJ Brodie and Mark Giordano paired with Justin Holl.
Although it might seem like we’ve seen these defence pairings before, the Maple Leafs actually haven’t used these pairs yet this season. Injuries have been the main reason behind that and it finally looks like Toronto’s defence core is turning the corner on being healthy again.
With Sandin returning, Conor Timmins will be the player coming out of the lineup. Maple Leafs head coach Sheldon Keefe said on Monday that this move had nothing to do Timmins’ play, but more of getting Sandin back into game action.
Timmins has been one of the Maple Leafs’ best defencemen since entering Toronto’s lineup. His 58.70 CF% at five-on-five, via NaturalStatTrick, tops the Maple Leafs’ blue line this season, though he’s only played 11 games.
It’ll be fascinating to watch Sandin and Liljegren once again. The two have played a fair bit together this year and were split up when Sandin was injured. Hopefully both players will be able to stay healthy and find a rhythm simultaneously throughout the next few weeks.
The Maple Leafs are gearing up to take on the St. Louis Blues on Tuesday night. Obviously, the biggest news coming from them is that both Vladimir Tarasenko and Ryan O’Reilly will both miss a chunk of time due to injuries.
With a couple of important players being out, it’s a great chance for Toronto to come in and steal two points from an injury riddled St. Louis team.
Puck drop for Tuesday’s game between the Maple Leafs and Blues is set for just after 7PM ET at Scotiabank Arena. The matchup will be aired on Sportsnet Ontario for anyone interested in watching.
News
Recent articles from Nick Barden