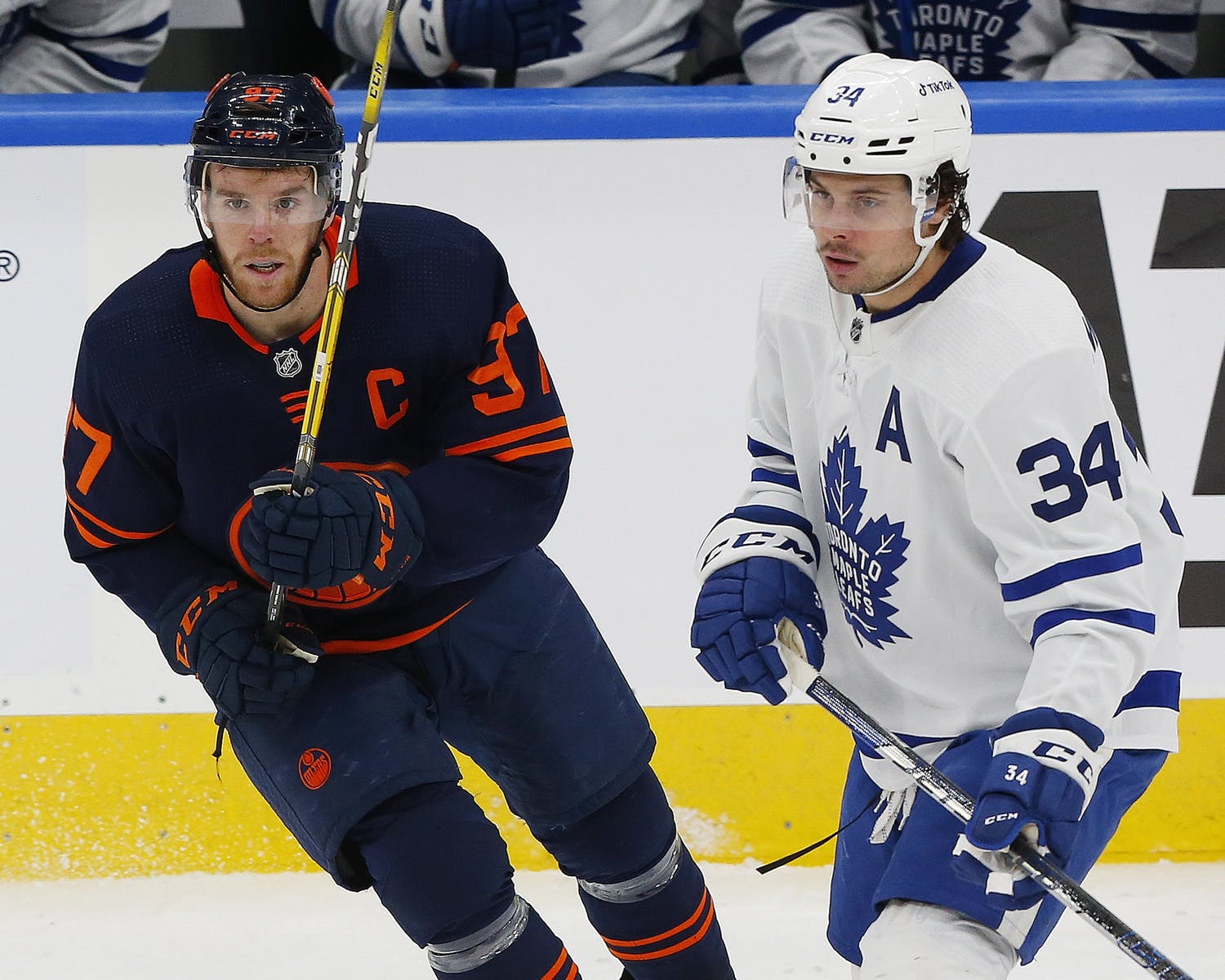 By Mike Gould
1 month ago
By his standards, Auston Matthews has had a relatively pedestrian start to the 2022–23 regular season.
Of course, he’s one of only three active NHLers with a 60-goal campaign under his belt. But he’s barely on pace through 40 through the first 33 games of this season, despite the Toronto Maple Leafs’ positioning near the top of the Atlantic Division.
Matthews stumbled out of the gate in October with two goals in his first nine games. Since then, he has a much more Matthews-like total of 15 goals in 24 games, which would put him on pace for 51 over a full 82-game schedule.
He’s been even better of late, racking up eight goals and 17 points in his last 11 contests. Better yet, his most recent goal — a snipe against the Tampa Bay Lightning on Tuesday — was his third game-winner of the season (and his first since November 5).
It feels a little strange to say a player is within “striking distance” of the NHL’s goal-scoring lead when he’s 11 back of the player in first place. But, as we all know, Matthews is capable of scoring 11 goals in a two-week span. Edmonton Oilers centre Connor McDavid is way, way, way up there at 28 goals, but he’s also shooting at nearly twice the clip.
McDavid has scored on a career-best 21.2 percent of his shots through his first 33 games of the season. Now, if anyone is capable of suddenly sustaining a pace like that, it’s Connor McDavid. But Matthews is way down at 11.4 percent in the early goings. Despite averaging three fewer minutes than McDavid on a per-game basis, Matthews has already taken 17 more shots on goal this season. Something has to give!
Matthews was back at his sniping best as the Maple Leafs played host to the Lightning at Scotiabank Arena on Tuesday evening, taking a feed from Rasmus Sandin and firing a power-play bullet from distance past Bolts goaltender Andrei Vasilevskiy just 1:01 into the second period.
Sandin picked up the primary assist on what would ultimately be his final shift of the game (he left with a neck injury and did not return). Mitch Marner also recorded a helper on Matthews’ 17th of the year.
Matthews finished in a tie with Michael Bunting for second on the Maple Leafs with six shots on goal in Tuesday’s game (William Nylander led the way with eight). He remains one of the league’s most consistent shooters.
But McDavid has begun to emulate Matthews’ clockwork-like scoring prowess this season. Edmonton’s No. 97 has 12 goals in his last 12 games, an eye-popping figure even by his standards. He’s on pace for 70 (yes, seventy) goals, which would be a far cry from his current high watermark of 44.
Will McDavid finish with 70 goals? Don’t count on it. Nobody has managed that this millennium (certainly not any active players) and, as good as he is, McDavid won’t shoot 21.2 percent forever. He’s certainly capable of becoming a 50-goal scorer if he puts his mind to it — and it appears he has — and 60 isn’t out of the question. But 70 remains more of a fantasy than a reality.
Toronto’s upcoming schedule might afford Matthews some opportunities to string together some multi-goal efforts. The Maple Leafs’ next three games are against Philadelphia (11–15–7), St. Louis (16–16–1), and Arizona (10–15–5). If he’s able to pot two or three against a couple of those teams, he might be able to move within a half-dozen goals of McDavid within a few weeks.
But, ultimately, schedules even out over time. According to Tankathon, the Maple Leafs have the eighth-easiest remaining schedule in the league — but the Oilers are only two spots behind. There’ll be plenty of opportunities for both McDavid and Matthews to rack up huge goal totals down the stretch.
That’s one thing we haven’t seen from Matthews yet this season: a goal-scoring binge. He’s been consistent, but — somehow — he has only one multi-goal game out of 33 this season. One! He had 15 last year, including four hat tricks. That’s overdue to change.
It’s unwise to bet against a player like Matthews over a long stretch of time. The Maple Leafs play four more games this calendar year. Don’t be surprised if Matthews lights the lamp at least twice in at least two of them. He might not catch McDavid soon, if at all, but — assuming he stays healthy — he’s going to give it one hell of a good fight.
Editorials
Recent articles from Mike Gould