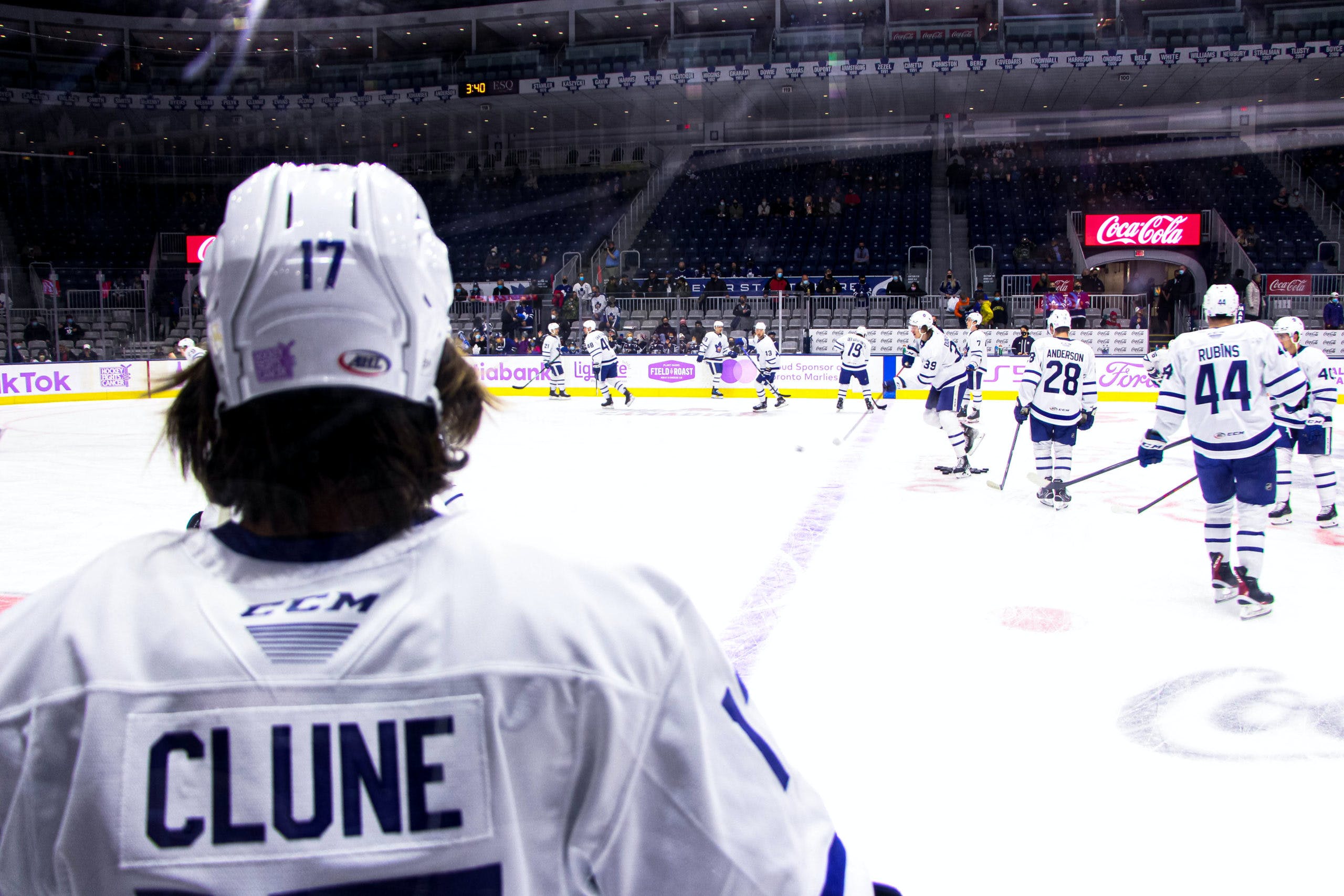 By Nick Barden
5 months ago
After 15 years of playing professional hockey, Marlies captain Rich Clune has announced his retirement and that he will be joining the Maple Leafs player development staff.
Clune spent seven years in the Maple Leafs organization, playing in the city where he was born and grew up. He’s had an incredible career — playing a total of 143 games at the NHL level and finishing with 22 points and 332 penalty minutes.

Ryan Hardy on Clune via the press release:
“Rich is in a class of his own when reflecting on the impact he has made on the Toronto Marlies,” said Ryan Hardy, Maple Leafs Assistant General Manager, Minor League Operations. “He is celebrated by all those who played and worked with him for the professionalism he exhibited day in and day out, the contagious energy that extended from the gym to the ice and the compassion he demonstrated for his teammates and all members of this club. We’re thrilled to have him join the player development staff and to continue delivering his invaluable support and guidance within our organization.”

The 35-year-old became the ninth captain in Marlies history on March 1st, 2021. It was an incredibly special moment for him, but a significant event for the organization as well.
“I’m just proud of the effort that I put in,” said Clune in his end of season media availability this year. “I love coming to the rink every day and just leaving it all out there, having fun with the guys, and I tried my best this year. I thought that it was definitely a fun year.”
When the 2021-22 season came to a close, the 35-year-old didn’t know what was next. There was always the possibility of a return — it could’ve been his last dance. But he’s given an incredible amount to this organization, and it’s very nice to see them giving him something in return.
“I’ve been at this (playing professional hockey) for a long time. I don’t know how much I led on, but I’m clearly a student of the game and probably watch more than I led on.” Clune said. “Obviously in my spare time work hard at acting and I think some people know that about me.”
During his final availability of the season, Clune alluded to the fact that maybe his next job would still be in hockey. And now we know that it will in fact be.
While speaking with Marlies head coach Greg Moore after the season concluded, I asked him what made the 2021-22 team so special. His answer tells the entire story.
“I always come back to [Rich] Clune.” Moore said. “Our captain, our leader — one of the greatest people I’ve ever met on this planet. He led the way for us, he set the tone, he was a big part of our culture and building relationships within the room for everybody, setting expectations. I know for myself, as a coach, and our whole staff has been talking about it a lot is just how valuable he is as a person. Within any sports team, if he was in the room, and we’re all very grateful to have the ability to work with him and get to know him as a person.”
The 35-year-old also battled substance use disorder during a point in his 15-year hockey career and has a documentary called “Hi, My Name is Dicky“. It’s an incredible film that’s worth setting some time aside to watch.
Clune had an amazing career and will be remembered for all of his moments. Whether it’s dropping the gloves or winning the Calder Cup with the Marlies back in 2018, there’ll be plenty of great memories to look back on. Congrats on a magnificent career.
More from TheLeafsNation.com