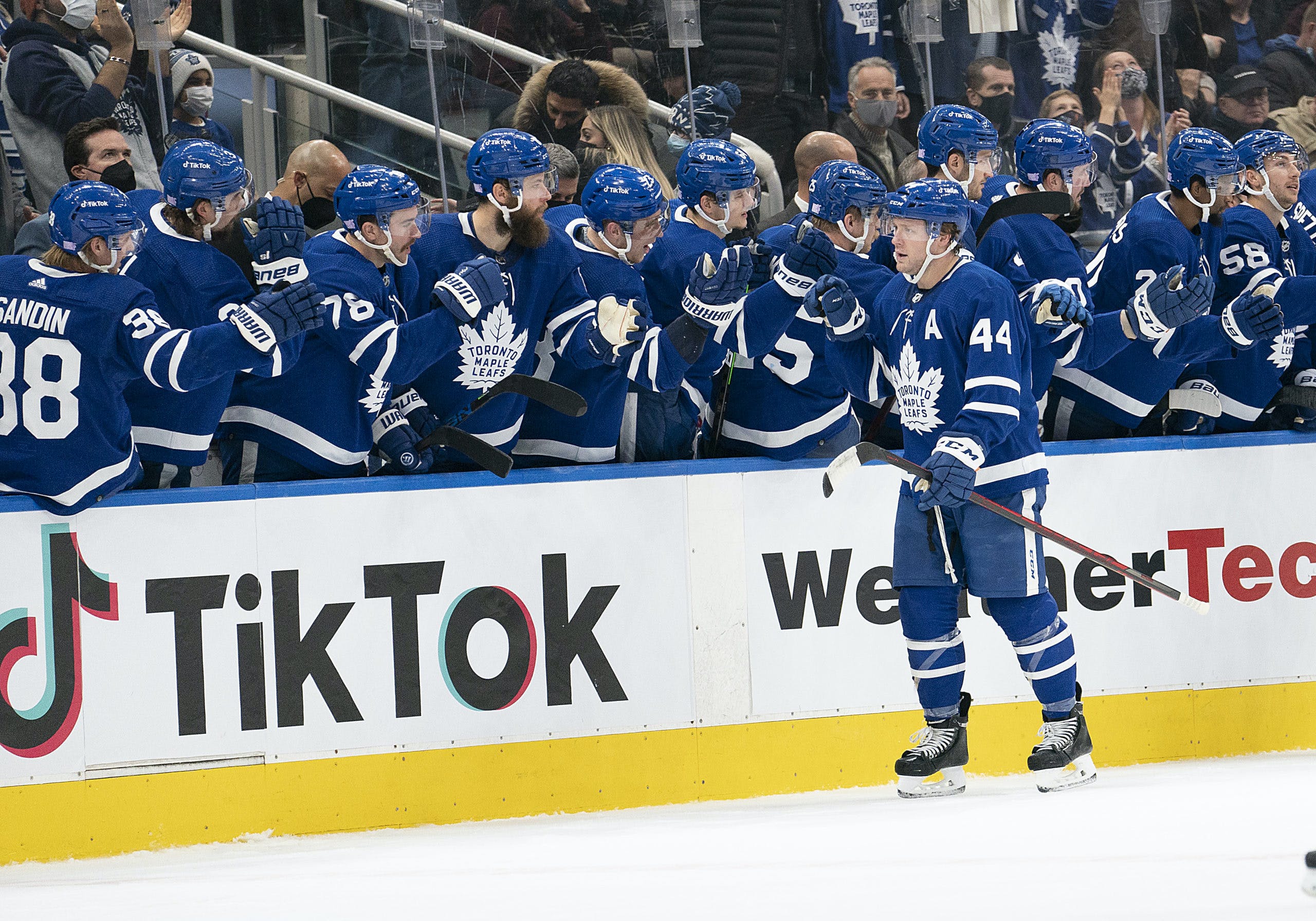 By Joseph Zita
1 year ago
After coming off a shutout win on home ice Tuesday night against the Nashville Predators, the Toronto Maple Leafs welcomed the New York Rangers into town for their second meeting of the season within the past month. No lineup changes for the Maple Leafs tonight as Timothy Liljegren sat out for the second straight game and Wayne Simmonds remained in the lineup again after being a healthy scratch Saturday night in Buffalo. Ondrej Kase was also a game-time decision tonight due to him blocking a shot late in the third period on Tuesday night, but he was deemed good enough to play.
The first period was a pretty slow pace for both teams as there were only about four shots combined – three for Toronto and one for new York – almost within the first 10 minutes of the period. However, the Maple Leafs didn’t need to throw a ton of pucks on net early to score their first of the night as Morgan Rielly threw one on the net after a tremendous shift by Simmonds that eventually led to him feeding Rielly for the goal and the Maple Leafs took a 1-0 lead.
Both teams opened up the second period basically how the entire first period went. Low event but both teams had some pretty good scoring chances, however, shots were limited midway through the frame. Just before the 10-minute mark of the second period, Toronto gets their first power-play of the game and they make no mistake as Rielly pots his second of the night with a nice toe drag shot that beat Shesterkin. Toronto continued to apply some pressure and the pace of the game slowly started to ramp up.
The third and final period started with the Maple Leafs applying some early pressure with some great chances at scoring but couldn’t find the back of the net. Not even five minutes into the frame, the Rangers found the back of the net off of a juicy rebound from Campbell and New York was within one. New York continued to apply some pressure after their goal and Sheldon Keefe didn’t like that so he took a smart timeout to settle them down. It was pretty much a back and forth game in the third period until just a bit under six minutes remaining as the Rangers were applying a great amount of pressure in the Toronto zone until the final horn, but it was Campbell who was there who turned all the shots aside.

Although he didn’t find the back of the net in tonight’s game, Matthews continues to pick up the points, especially on the power-play as he grabbed the game-winning assist on Rielly’s second goal of the night which ended up to be a really important marker. I felt like Matthews was involved a lot tonight. As I said, he picked up an assist to continue his point totals, he had three shots, he had four hits and he just looked like he was one of the core four players who were involved in the game the most, along with John Tavares. He did have his chances to score tonight, but clearly, tonight wasn’t the night as they were up against Shesterkin, who, if you don’t know, is pretty good in the net if you couldn’t already tell.

Kyle Dubas better re-sign this guy sooner rather than later, because he’s been one of the three stars of the game here countless times this season and he has been, without a doubt, the Toronto Maple Leafs’ MVP through the early going of the regular season with his stellar play in net. Through the first two periods, he didn’t see that much action, kind of like the Nashville game on Tuesday. But when he was tested, he answered and turned them all aside to keep the lead at two for Toronto. The third period tonight was where Campbell really stood out to me. He was faced with 14 shots and turned them all aside except for one which was scored off a juicy rebound he gave up to Dryden Hunt. All in all, it was yet another rock-solid game for Jack between the pipes and was one of the main reasons why the Maple Leafs picked up another two points.

Without a doubt, tonight’s first star of the game goes to Morgan Rielly, who seems like he has been a goal-scoring machine in the last small handful of games. Rielly had both Maple Leafs goals tonight which were enough for a 2-1 win over the Rangers. On top of Rielly’s offense in tonight’s game, he was also pretty good defensively as he made a couple of good heads up plays, especially with one late in the third period after Campbell made a pad save and Rielly quickly beat the forward to the puck to clear it into the corner to kill more time. Tonight kind of felt like a vintage Rielly game to me. He was involved in the rush, scored twice, made some nice passes, and just stood out to me in a good way.

I wouldn’t say he was that bad tonight, but Pierre Engvall just continues to do Pierre Engvall things in the games Toronto plays and you either get frustrated, scratch your head, or just laugh at this point. I honestly feel that if Kampf and or Kase weren’t on his line, how would Engvall look out there on the ice? Those two players hold tremendous value to this team and to that line. However, tonight, he had a couple of moments where he was soft on the puck and it makes no sense to me because he’s literally 6’5 so you would think he hits everything that moves, but I guess not. He had a couple of plays where he would pass it to no one and it would either cost a turnover or a Maple Leaf would have to skate towards it and get it.
Uncategorized
Recent articles from Joseph Zita