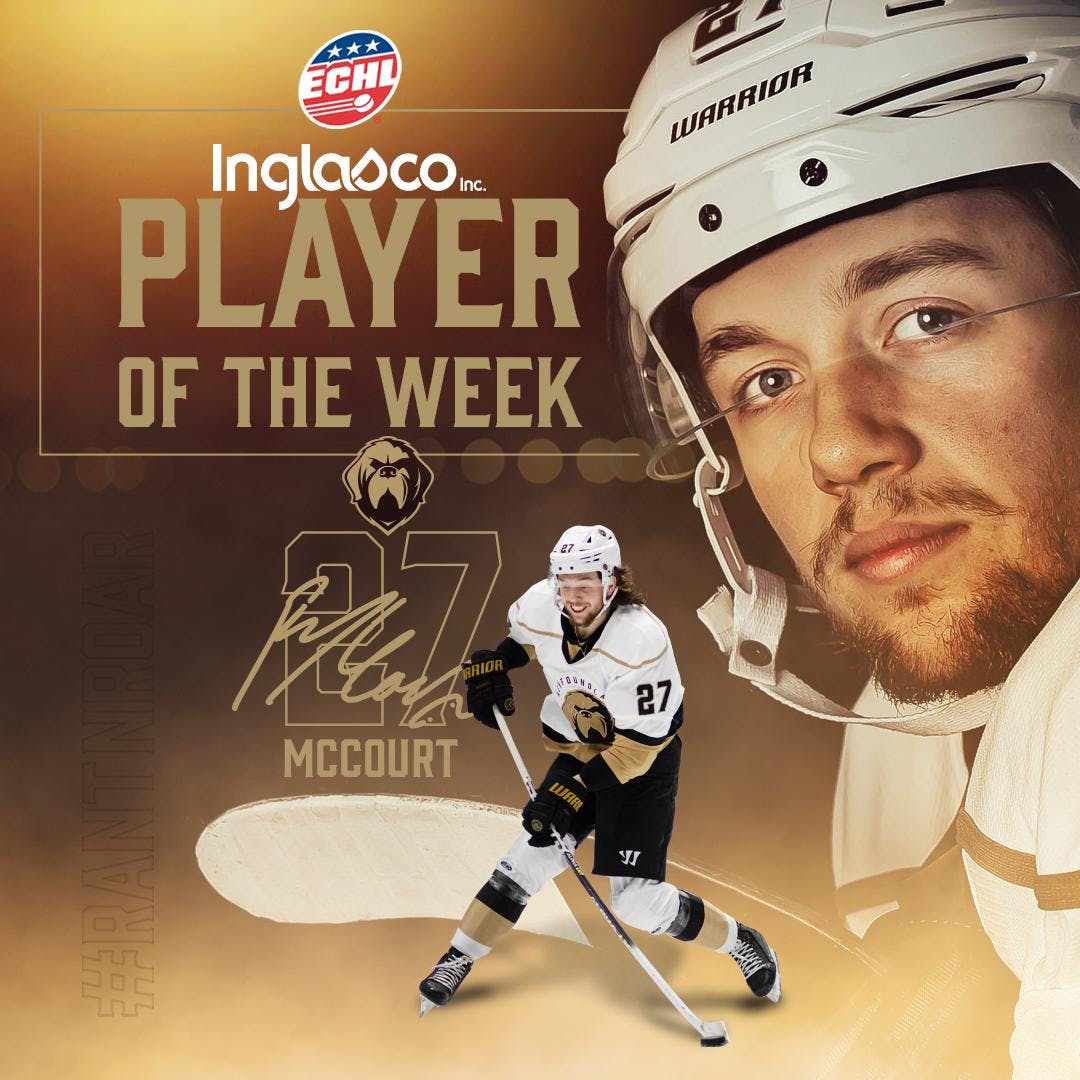 By Dylan Murphy
10 months ago
It was December 11, 2021, when Newfoundland Growlers defenceman Riley McCourt got an opportunity to do something even he couldn’t have anticipated doing during his first full year as a pro. Instead of patrolling the blue line, he’d be standing just to the left of the face-off dot as a winger. About 12 minutes into the first period, he scored his second goal of the season.
“It’s a lot of fun,” McCourt said after that game. “I think anytime you get the chance to play a different position, it’s obviously exciting. The guys made the transition easy and all the guys in the room were great with gettin’ me excited and gettin’ me fired up.”
McCourt followed up that game with a power-play goal (again opening the scoring) the next day, in what would be the team’s final game for several weeks. More than a month later, on Jan 21, McCourt would find his way back into the forward line rushes, this time at center-ice for a 9-4 win over the Kansas City Mavericks, before returning to defence again for the remainder of a lengthy road trip.
Since then McCourt’s versatility has been a weapon that head coach Eric Wellwood has taken full advantage of when the team is dealing with injuries or illnesses to forwards. And McCourt rewards his coach for that trust in kind by finding the back of the net. He scored his fourth of the season on Feb 4 playing at center, (opening the scoring for the third time,) and this past week, slotted in at left wing for four out of five straight games against the Growlers’ only Canadian rival, the Trois-Rivieres Lions, and scored five goals and 10 points total, including his first professional hat trick on Mar 11.
“It’s real exciting to get that third one,” McCourt said with a smile immediately after the game. “But I mean, if you watch all the goals back, you know, credit to my linemates and the five-man unit we had on the ice just making it easy for me.”
“It’s a nice luxury of us to have,” Wellwood said. “To put a defenceman at forward and have him get three, really happy with him… You can’t ask for more out of a guy for him to play out of position and put out a dominant effort.”
For his performance last week, McCourt was named the ECHL Player of the Week, joining Zach O’Brien and Orrin Centazzo as the third Growler to win that honour this season. Despite the success at the forward position, McCourt says not to expect him to make the shift a full-time move, at least, not yet.
“I’m a defenceman at heart,” he said “(playing defence) is in the back of my mind, for sure, so I’m always thinking about not letting guys get behind me.”
From the moment Wellwood approached McCourt and asked if he’d be ok with trying out a game or two at forward, he’s had very little to be disappointed with. The gambit has most certainly paid off.
“Riley played fantastic,” Wellwood said after McCourt’s first game at forward in December. “It’s not easy for anybody to change positions, you know, going from center to wing is difficult enough. So imagine going from spending your whole life playing defence, to suddenly having to play a game at forward, and do as well as he did? We’re extremely proud of him and he should be proud of himself.”
Content
Recent articles from Dylan Murphy