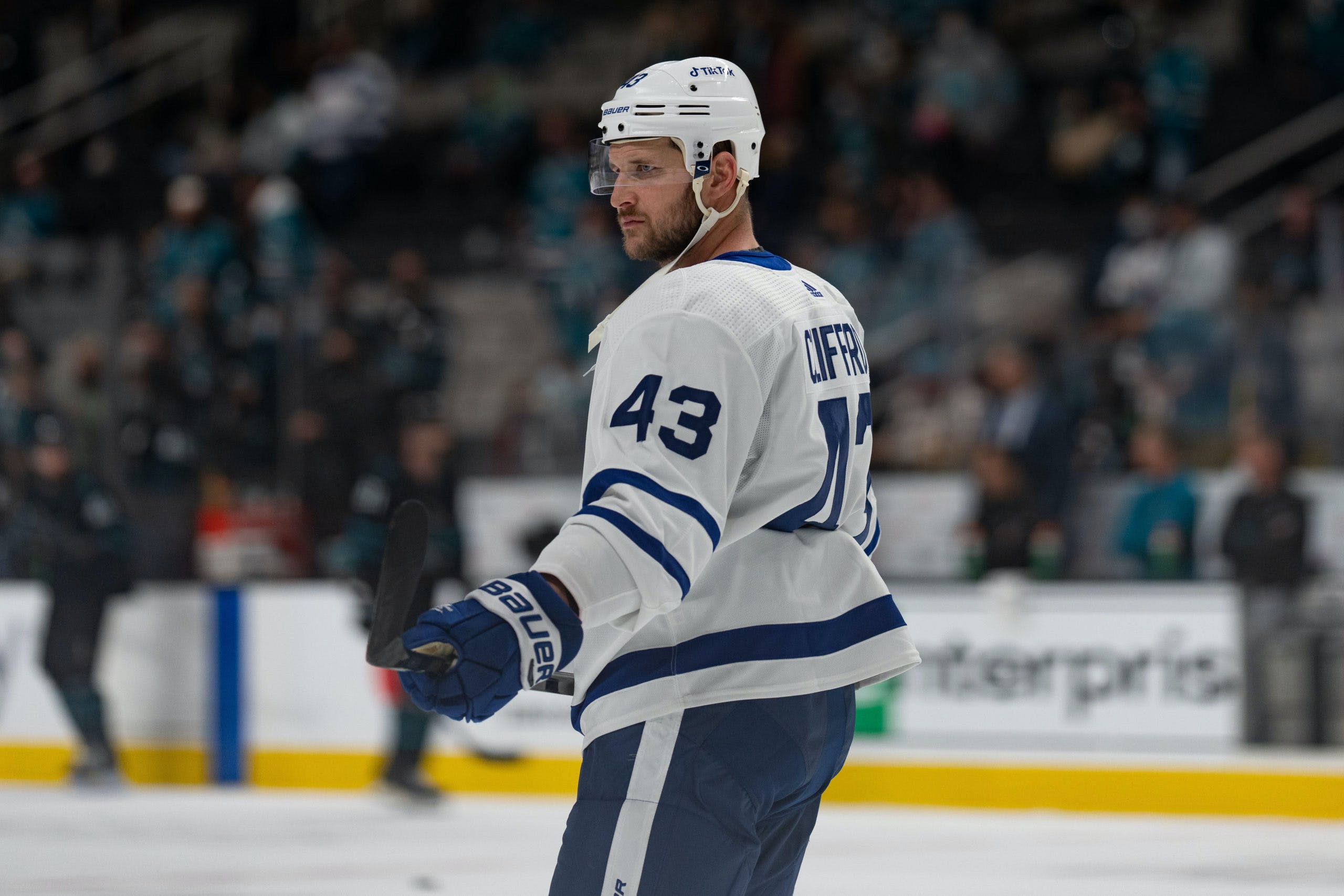 By Nick Barden
1 year ago
The Toronto Maple Leafs are in Anaheim getting ready for their final game on the West Coast tomorrow. Toronto is currently the hottest team in the NHL, winning 13 of their last 15 games. Toronto is also in a tie for first in the Atlantic division.
One of the most significant pieces to note is that Ondřej Kaše was absent from practice once again. The 26-year-old missed practice on Thursday with Sheldon Keefe calling it “a maintenance day.” On Saturday, though, Keefe said it was more than just maintenance.
Kaše has an upper-body injury, Keefe said after Saturday’s practice.
With Kaše out, it allows the Leafs to experiment with other players and see how they can play. One of which is @Kyle Clifford, who will come into the Leafs lineup tomorrow in Anaheim for @Kirill Semyonov. It will be Clifford’s first game back on the Leafs since being traded back to the team from St. Louis.
Clifford did play two games with the Marlies, though, before being called up to the Leafs. One of the other interesting tidbits is that @Timothy Liljegren will come out of the lineup, and @Travis Dermott will slot back in for Sunday’s game.
“I think it’s just a matter of Dermott’s sat four in a row, I think it is there now, and it’s longer than we wanted to have him sit.” Keefe said after practice on Saturday. “So I think, it’s the end of a long trip for us here, so it’s a good chance to get [Dermott] in, and at the same time, give [Liljegren] a day off. And then, with [Clifford], we like the opportunity to get him in a game here.”

“It’s a daily discussion we’re going through,” said Keefe on Thursday about switching up the Leafs bottom pairing. “Right now, we’ve got [Justin] Holl, Dermott, Liljegren, and even [Rasmus] Sandin a bit there involved in that mix of guys that may have to come out from time to time. Sometimes it’s just managing their minutes, their rest, and all that too, as we’ve discussed, specifically with Sandin and Liljegren. Two younger guys that haven’t played a lot of hockey at this level, and even last season didn’t play much hockey. Both guys have already played as much or more than they’ve played last season, and they’ve had a history of injuries, so we gotta be smart with all that too.”
Keefe also mentioned that switching the bottom pairings is more of a reactionary thing. He says that those decisions will be made on a game-by-game basis.
It makes sense because, with all of those guys, they need to be playing games. It wouldn’t make sense for the Leafs to go with one set lineup (other than their more paid players). If there was an injury on the blue line, one player would be coming in cold. With the Leafs coaching staff doing this, it avoids that problem if it were to come.
The Leafs play Anaheim tomorrow. Puck drop is at 8 PM ET.
Uncategorized
Recent articles from Nick Barden