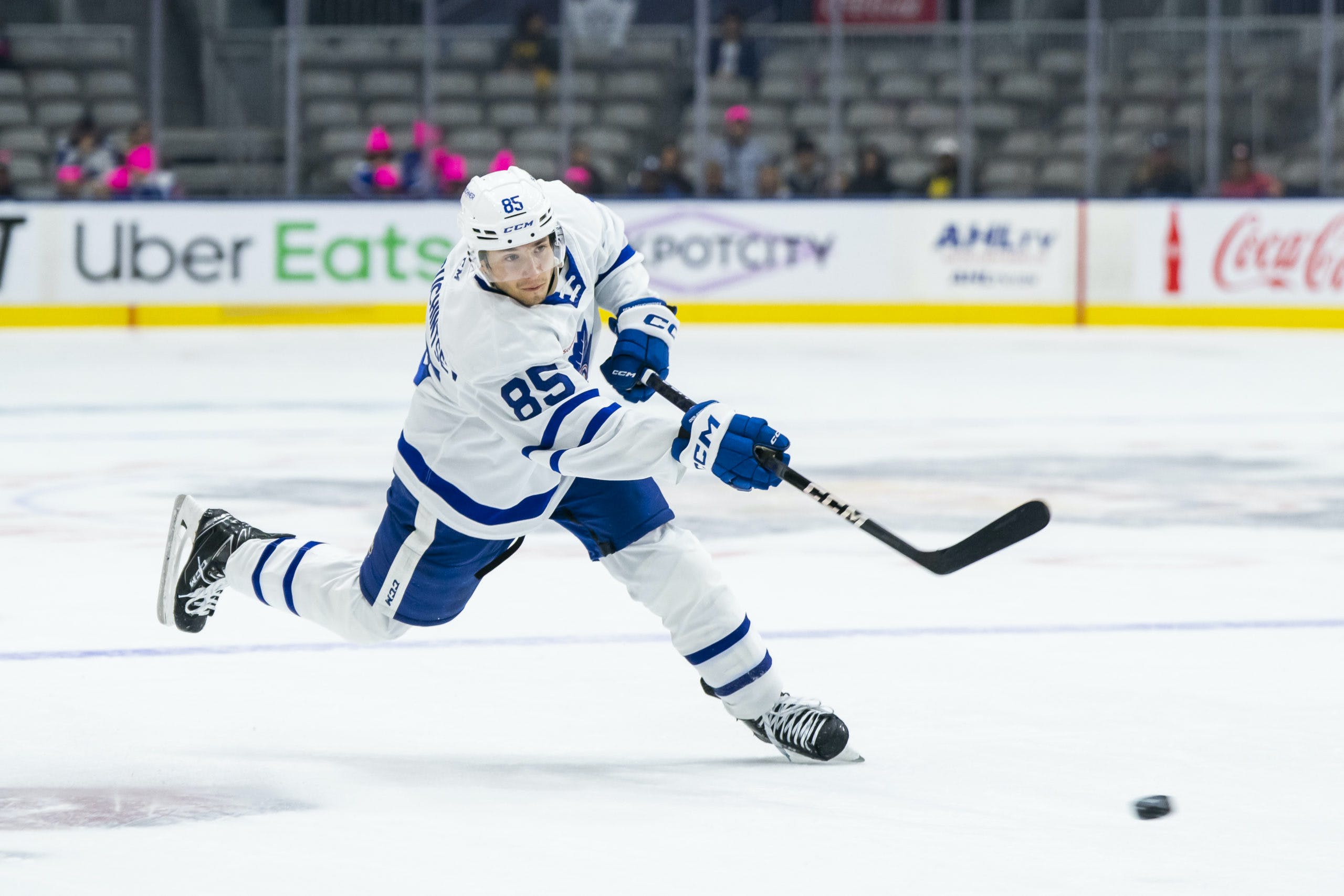 By Nick Barden
2 months ago
Semyon Der-Arguchintsev — a forced to be reckoned with — is finally finding his stride at the professional level.
The 22-year-old has taken a rather fascinating path to get to where he is today. Four seasons in the OHL, 17 games in the KHL, and finally, the past two years in the AHL.
What makes Der-Arguchintsev special is his skill with the puck and the ability to find anyone on the ice for a pass. Even when you think a play isn’t possible, the 24-year-old still somehow makes it, sometimes even taking his teammates by surprise.
“You can see a lot of the special things that he does on the ice, especially with the puck.” Marlies head coach Greg Moore said earlier this season.
If you look at where Der-Arguchintsev was last season, compared to where is currently, it’s like he’s a totally different player. His skill is still there, obviously, but having more experience in the AHL has catapulted him to new heights.
The 22-year-old is much more mature this year when it comes to his game both on the puck and away from it. One of the areas where his growth stands out most is his play in the defensive end.
Der-Arguchintsev has made it increasingly difficult on his opponents to generate any scoring. It’s shown to the point now where Moore trusts the centreman out on the ice late in the game during defensive situations.
The area of ice in which Der-Arguchintsev is most threatening, though, is when he’s carrying the puck through the neutral zone.
When the 22-year-old is going end-to-end, there’s two things that are likely to happen. One, it’s almost always an automatic zone-entry. Two, there could be a highlight-reel goal on the way.
“You can see the way he carries the puck, his head is always up, he’s not afraid to take a guy one-on-one.” Said Joseph Blandisi. “It’s pretty impressive to see his age and the way he’s able to take on guys.”
One of the things Der-Arguchintsev mentioned last season was that he’s committed to improving his shot. He wants to be a dual-threat on the ice, using his shooting ability when the opponent thinks there’s going to be a pass.
You could see him making strides later into last year, but the 22-year-old has taken it to another level just 15 games into this season.
It’s not even just the power of his shot, though. Der-Arguchintsev has made a conscious effort to choose wisely when shooting the puck. His shot selection this year has allowed him to find the back of the net more often.
It’s safe to say the 22-year-old reeks with confidence, and with that being the case, his game has gone to another level because of it.
One area where I didn’t expect Der-Arguchintsev to move the needle on was his physicality. He’s never been the type of player to throw many hits or get into scuffles after the whistle.
But that has changed throughout this season.
Der-Arguchintsev has dropped the gloves once, and that was while he was with the Peterborough Petes back in 2019. When he was a veteran in the OHL. With that being said, you can tell he’s becoming more comfortable if he’s willing to drop the gloves at the AHL level.
Plus, it shows how much he cares about this Toronto team and what he’ll do for his teammates.
Just 15 games into his season with the Marlies and the 22-year-old is on a point-per-game pace. Der-Arguchintsev is almost halfway to his point total from last season, which he accumulated after 51 games.
If he’s able to continue the run he’s on, the future is bright for him. Maybe, even possibly, NHL bright.
Editorials
Recent articles from Nick Barden