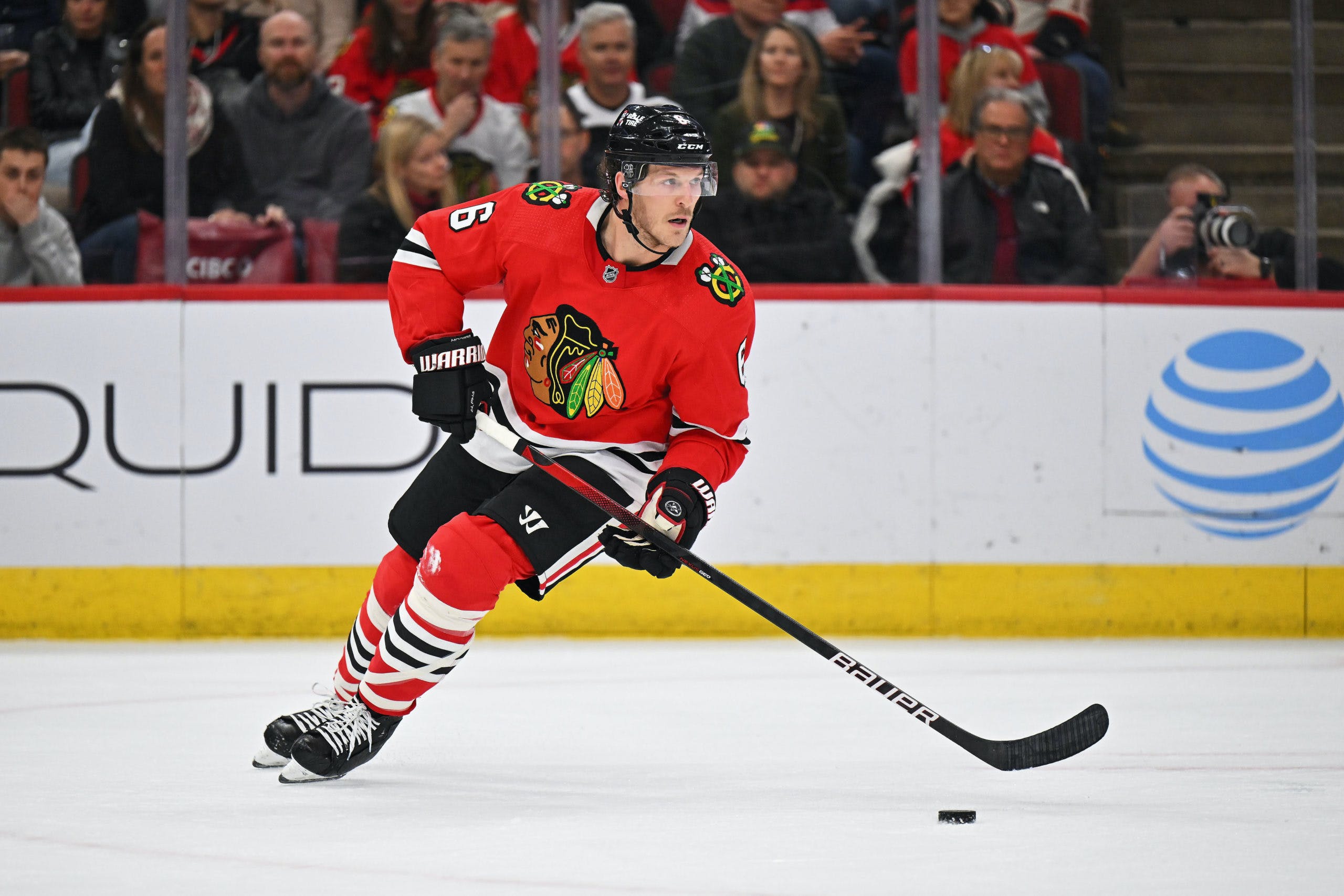 By Nick Barden
10 days ago
Speculation and rumour season is upon us and that means a lot of discussion surrounding what the Maple Leafs might do ahead of the NHL trade deadline.
We’re nearly a month out and it seems like Toronto might have their eye on a few interesting pieces.
DailyFaceoff’s Frank Seravalli joined TLN’s Nick Alberga on Friday’s edition of ‘Leafs Morning Take‘ to discuss who the Maple Leafs might be targeting the beef up their roster. One of the names that came to light was Chicago Blackhawks defenceman, Jake McCabe.
“The Blackhawks have received a number of calls for him,” said Seravalli. “He has a seven-team no-trade list. The other teams that have called include Edmonton and the Los Angeles Kings.
“Here’s the thing with McCabe — his seven-team no-trade list — you say, ‘Well why seven teams? It probably includes all seven Canadian teams for the American-born defenceman.’ But I’m told the Maple Leafs are one team that are not part of that list, it’s the other six Canadian teams.
“Interestingly enough, I think they’ve had some interest in him going back a ways,” added Seravalli, “and here’s where it gets interesting from a Toronto perspective: What if you can entice the Chicago Blackhawks, who have tons of cap space, to retain half on Jake McCabe, and get him at $2-million a year for each of the next two years?
“He’s probably already playing at a $4-million level right now. Yes, there’s risk in injury history, there’s risk with any player. But at $2-million a year, that gives you some serious cost-certainty at a time when the Leafs really need it on the back-end.”
McCabe is a 29-year-old left-shot defenceman who’s spent time this year on Chicago’s top pairing with Seth Jones.
Seravalli updated his NHL Trade Targets list with a number of interesting names. There are 30 players in his article who could be moved, and some of them might just be linked to the Maple Leafs.

READ IT HERE: Trade talks heating up with Canucks’ Bo Horvat, No. 1 on latest Trade Targets

Seravalli continued on to discuss a number of other players, including the one of the Maple Leafs’ top prospects, Matthew Knies, and whether he might be an untouchable or not.
“Not an untouchable,” Seravalli said. “I think (he’s) someone that the Leafs clearly value. But, I believe, if the right deal is available, and I think you’d have to include just about anyone in terms of futures if you’re the Leafs at this point. This a burn the boats-type year.”
Another name that was discussed on the show was Timo Meier and Bo Horvat, who’ve been linked to plenty of teams throughout the past week. Seravalli didn’t mention whether or not the Maple Leafs have targeted them, though they would each be interesting adds.
TLN’s Managing Editor, Jon Steitzer, also released a rumours article today. He wrote about a number of names including Conor Garland, Tyler Bertuzzi, and more on Horvat.

READ IT HERE: Another Leafs trade target list, the cost of Bo Horvat and the role of waivers around the trade deadline: Rumours

If you’d like to watch the entire ‘Leafs Morning Take‘ show with Alberga joined by Seravalli, it will be linked below.
News
Recent articles from Nick Barden