Should Auston Matthews play on the penalty kill? 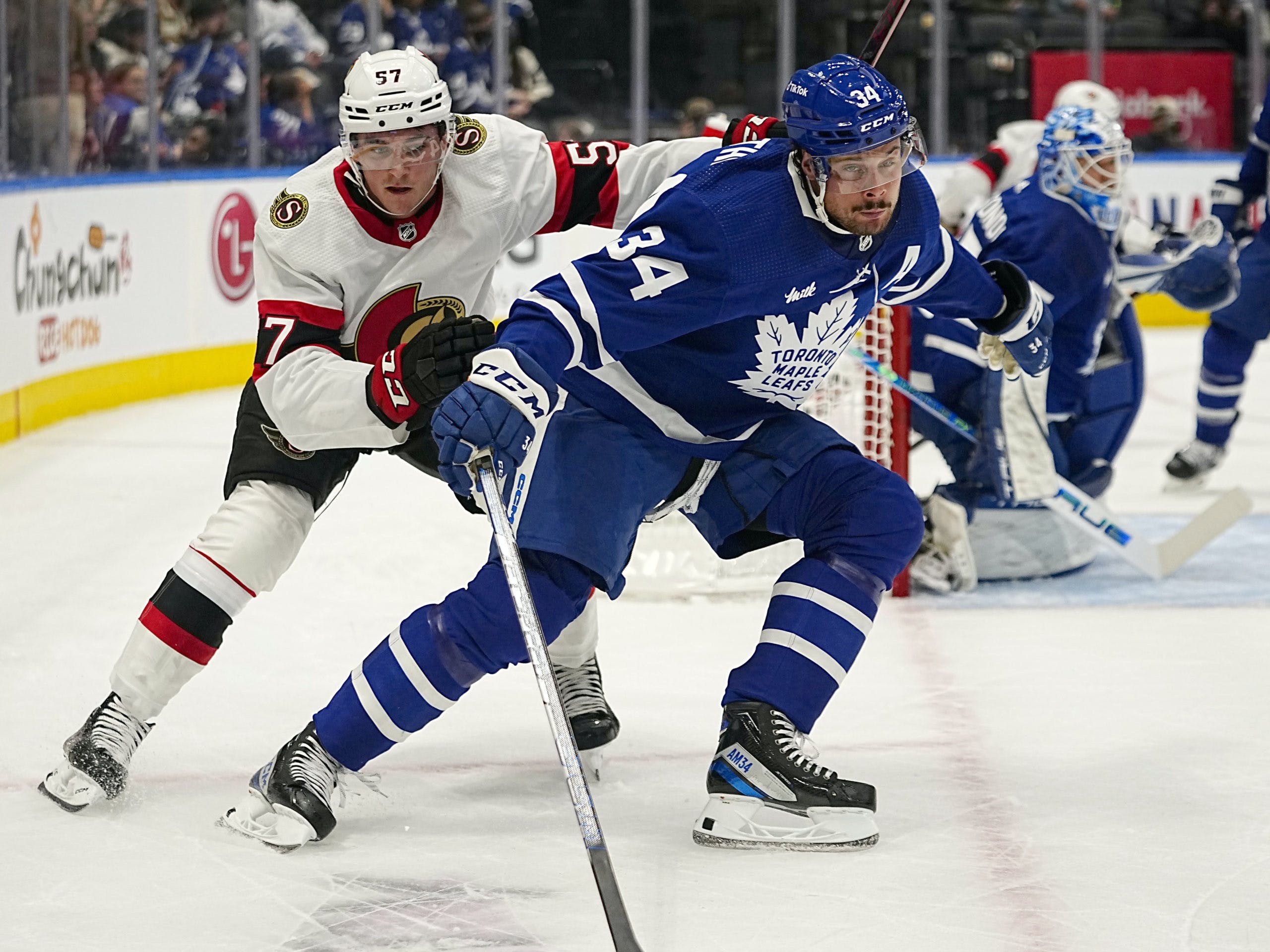 By Jaden Ho
3 months ago
Auston Matthews is, without a doubt, the face of the Toronto Maple Leafs franchise. Alongside his powerful skating, elite strength, slick puck handling, and otherworldly shot, he has recently added another layer to his game, becoming an incredibly strong defensive player. His defensive prowess has developed to the point that he’s found his way into the Selke trophy conversation, finishing 10th in the voting this past season. One of the biggest arguments against his Selke case, however, is that he does all of his work defensively at 5 on 5. In the 2021-22 season, Matthews logged just three seconds of shorthanded ice time per game.
So why hasn’t Sheldon Keefe been willing to put Matthews on the penalty kill? The Leafs have struggled to find centres who can play shorthanded, sometimes being forced to put wingers in the faceoff dot in crucial 4v5 situations. The addition of David Kampf helped this past season, but Matthews is a strong centre who won 56% of his draws last year, and had the most takeaways of any forward in the league with 92.
Perhaps the biggest downside of putting Matthews on the penalty kill is load management. While the Leafs’ superstar is far from injury prone, he has had some injury trouble in the past, which the Leafs will absolutely want to keep from repeating. Even with his limited time shorthanded, Matthews racked up over 22 minutes of ice time per game last season. If the Leafs do put him on the power play, they would have to redistribute his even-strength ice time to make sure they don’t overwork him. Taking away his even-strength ice time would reduce his chances to do what he does best, which is create offence and score goals.
The other argument that could be made in favour of putting Matthews on the penalty kill is that they simply don’t need him there. The team killed of 82.1% of opposing man advantage opportunities, good for eighth in the NHL. They scored 13 shorthanded goals, leading the league. The addition of David Kampf and the continued growth of Alex Kerfoot meant the Leafs had two reliable centres to put out there to take faceoffs shorthanded.
The Leafs also should take into account whether or not Matthews wants to be playing on the penalty kill. Usually that kind of decision is, and should be, entirely up to the coach. But when you have a superstar on the level of Auston Matthews, you can bend the rules a little bit. Playing on the penalty kill, if he is successful, would have a big impact on his leaguewide reputation, and his ability to sway voters for the Selke Trophy, but perhaps Matthews is content where he is right now, racking up goals and points while being defensively responsible at 5 on 5. With the Leafs current penalty killing situation, that’s okay.
The most important question to ask in regards to Matthews on the penalty kill is simple. Does it make the Leafs a better team? Is Matthews an improvement defensively over either David Kampf or Alex Kerfoot? If he is, is it enough of a difference to compensate for the potential loss of offence on Matthews’ part? Defensively, while Kampf and Kerfoot have gained a reputation of being strong defensive players, they actually rank lower than Matthews in terms of defensive WAR, with Matthews ranking in the 85th percentile, Kerfoot in the 55th, and Kampf in the 83rd. Defensive prowess doesn’t necessarily equate to strong penalty killing, but Matthews’ defensive responsibility and skill is promising for the Leafs.
On the other hand, the biggest problem remains that Matthews offensive production would take a hit. Lets say Matthews replaced Alex Kerfoot on the penalty kill. Kerfoot played 141 minutes of short handed time, so let’s assume all of that time goes right to Matthews. Assuming Matthews continues on his 1.89 goals per 60 minutes pace at 5 on 5, moving him onto the penalty kill, and subtracting the penalty killing time from his even strength time, would likely cost him about 4.5 goals per season. Assuming Kerfoot remains on his 0.55 goals per 60 pace, he would replace that Matthews offence with about 1.2 goals per season. So we can assume that putting Matthews on the penalty kill would result in a loss of about 3.3 goals per season for the Leafs. That’s not a huge hit, but it seems like it would likely be more than the difference between Matthews would make over Kerfoot on the power play.
While Matthews could be a good penalty kill player, putting him out shorthanded for the season just seems like it wouldn’t be a big enough improvement on the team to make the transition worth it. The Leafs have a great penalty kill, and if they do struggle, it’s great to have a player like Auston Matthews as an option to switch things up.
Do you think Auston Matthews should be playing on the penalty kill? Let us know in the comments below!
More from TheLeafsNation.com
News
Recent articles from Jaden Ho