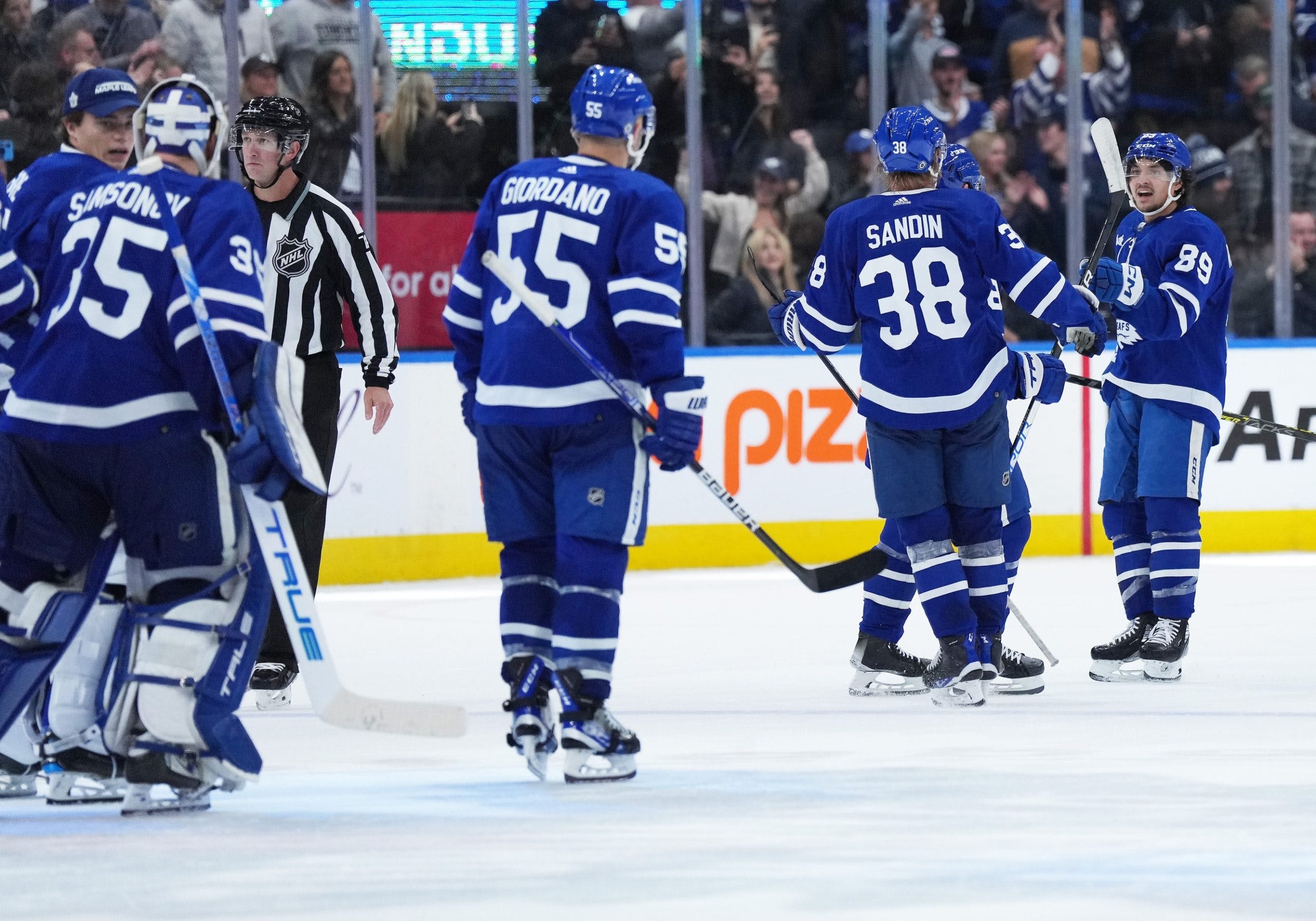 By Nick Alberga
1 month ago
Following an eventful 3-1-0 homestand, the Leafs (3-2-0) will take their show on the road for five to wrap up the month of October starting with a stop in Winnipeg (2-2-0) tonight.
Back on Thursday night, Nick Robertson potted two goals, one of which was the OT winner, as Toronto edged Dallas 3-2.
All-in-all, it’s been your prototypical rollercoaster week in Leaf land dating back to last Saturday. It has included two victories, Robertson’s first game heroics, two marquee injuries (Matt Murray & Jake Muzzin), and an embarrassing loss to Arizona that led Sheldon Keefe to indirectly call out his elite players.
Meantime, after a bout with COVID-19, new Jets bench boss Rick Bowness is expected to make his regular-season debut behind the bench. Winnipeg is coming off a lopsided 5-2 loss in Vegas on Thursday night.
This one’s the first of two between the Leafs and Jets this season, they each took a game from each other in 2021-22. Toronto has seven of the past seven of 10 in Winnipeg.
Time: 7 PM EDT (CBC, CITY, SNO)
Starting Goalies:
TOR Ilya Samsonov – LIKELY (3-0-0, 1.96, 0.927)
@
WPG Connor Hellebuyck – CONFIRMED (2-1-0, 2.66, 0.922)
Projected Lineups:

(NOTE: Kyle Clifford is expected to draw in as well for Pierre Engvall)

Three Storylines:
WAYNE TRAIN’S SEASON DEBUT
Five games in, Wayne Simmonds is back. And the decision to insert the veteran back in the lineup makes perfect sense, especially after Dallas was running around on Thursday night. The 34-year-old didn’t crack the initial roster to start the season, but the injury to Matt Murray last weekend opened up a roster spot. Nicolas Aube-Kube is expected to draw out.
BURY THE BUILDING
It’s Saturday night, Canada Life Centre will be rocking. Widely regarded as one of the loudest barns in the NHL, it’s imperative for the Leafs to take the crowd out of the game as soon as possible. Toronto scored the first goal in each of its first two games, but haven’t in three outings since. They need to take control quickly.
ROBERTSON’S ENCORE
There’s no doubt the 21-year-old was fantastic on Thursday night, but can he build off that now? As he mentioned on Friday, Robertson doesn’t just want to just “have a night.” And that makes complete sense. Part of his transition into being a full-time NHLer will be finding a way to be a consistent contributor night in and night out.
BETTING:
Courtesy our friends at PointsBet Canada, here’s tonight’s odds & lines:
Prop Play:
Mitch Marner Over 1.5 Points
Through five games, Marner has failed to register a multi-point effort. In 17 career games against Winnipeg, the 25-year-old has notched 24 points.
News
Recent articles from Nick Alberga