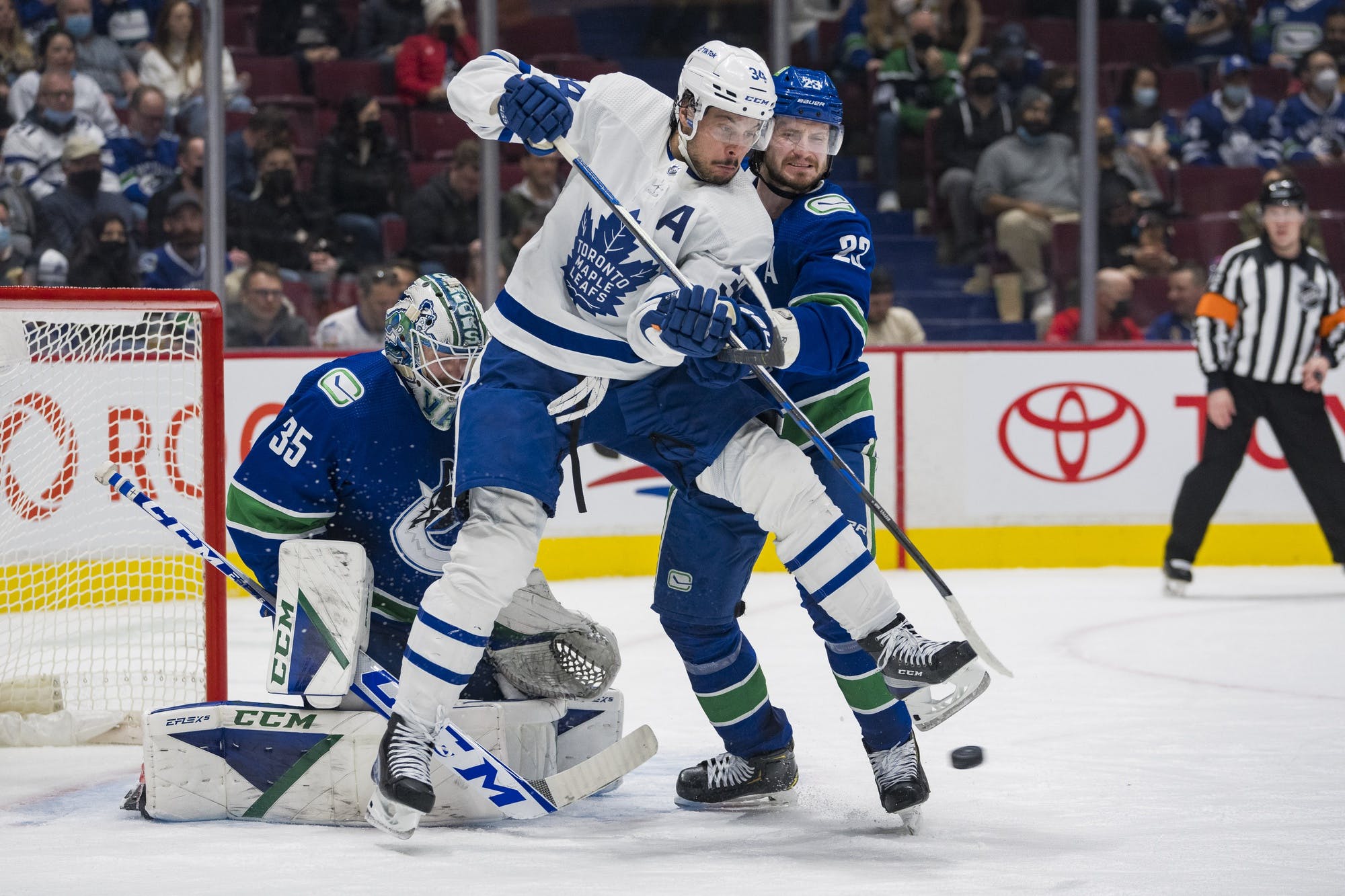 Photo credit:Bob Frid-USA TODAY Sports
9 months ago
VANCOUVER — For the second consecutive game, the Toronto Maple Leafs peppered the opposing goaltender with shots but fell short.
Thatcher Demko made 51 saves as the Vancouver Canucks hung on to defeat the Leafs 3-2 at Rogers Arena on Saturday. Coming off their season-high, six-game winning streak before heading out west, the Leafs have posted back-to-back regulation losses for the first time since that dreadful 2-4-1 record they posted to start the season back in October.
That’s not to suggest the Leafs’ two-game mini-skid is anything to be concerned about in the long term.
After firing 48 shots toward Calgary Flames goaltender Jakob Markstrom in a 5-2 loss, the Leafs have fired 101 shots on goal in the two-game span.
“We’ve been very consistent in our ability to bounce back and put together long stretches of winning but I didn’t like the starts,” Maple Leafs coach Sheldon Keefe said following the game. “To me, it’s a self-inflicted loss here tonight and I don’t like that, but we did a lot of really good things here today.”
The Maple Leafs had a hard time finding their chemistry early in the game. Canucks forward J.T. Miller put the Canucks on the board early in an odd scramble that included the goaltender Petr Mrazek getting stick stuck the skate of Canucks forward Bo Horvat.
Mrazek didn’t want to comment on the specific play, but the Leafs mulled over the decision for a lengthy period of time before they elected not to issue a coach’s challenge.
“The official told us that he actually had a tripping penalty to Mrazek on the play which gave us pretty good insight into their mindset and the feedback they would be giving to the NHL war room,” Keefe said.
Brock Boeser followed up Miller’s goal with a power-play tally that spotted the Canucks a 2-0 lead just six minutes into the game.
The Canucks outshot the Maple Leafs 4-2 up until that point and Toronto fired 51 shots on goal in the next 54 minutes.
That pace of play helped the Leafs get back on track, albeit temporarily.
Auston Matthews scored his 32nd goal of the season while on the power-play. Much of it with the brilliant pass from John Tavares in the slot.
Ondrej Kase, who came off a scary hit to the head against Calgary on Friday, scored the tying goal on the power play after deflecting Jason Spezza’s shot from the point.
But it’s the game-winning goal Vancouver’s Juho Kammikko that becomes a focal point.
With Mrazek having an opportunity to play in more games, this was his chance to build some momentum in the crease and perhaps increase the amount of games he may get going forward with starter Jack Campbell struggling between the pipes.
But Mrazek gave up a juicy rebound on a shot by Alex Chiasson. The puck went right to the stick of Lammikko who buried it at 18:30.
“I didn’t like the third goal,” Mrazek admits. “I wish I would put it in a different spot and I put it right on his stick.”
Before the game, Keefe was asked if Mrazek would possibly start alternating starts with Campbell if he had a good showing but didn’t commit to any sort of schedule other than stating that Mrazek will play more than he has in the past.
“I’m really excited for that,” Mrazek said, “The first half of the season wasn’t what I wanted but no I’m feeling really good about the game and a lot of games coming up so I’m pumped for that.”
Despite a slow start to the game, the Maple Leafs’ ability to generate chances at the net should provide some solace for the club in not letting their mini-slide turn into a slump. They outplayed the Canucks in every category, not unlike how they played against the Calgary Flames. The differences in the two games saw the Leafs make more mistakes.
“It’s a team that relies on world-class goaltending to win games as it is, then you give them a two-goal lead and it’s an uphill climb from there,” Keefe said. “Love that our guys kept fighting.”
The game had a festive environment. Despite Rogers Arena being limited to 50 percent capacity due to ongoing government restrictions, Leafs fans still made their presence felt on the road.
The crowd erupted when both Matthews and Kase scored.
I think we can just do a better job offensively creating a little, bit more havoc, maybe in from the goalie.
“The fans were amazing,” Kase said. “I feel sad for them we didn’t win but it was very helpful.”
News