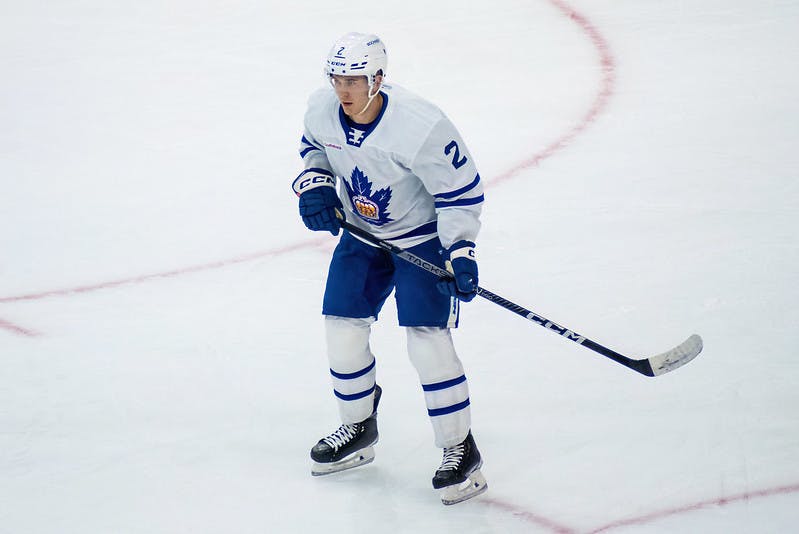 By Colin Hunter
1 month ago
One of the prominent themes of the early season thus far for the Leafs has been the high number of injuries sustained by defensemen.
In this period, we’ve seen a number of players step up and take advantage of the increased responsibility. Players like Rasmus Sandin, Conor Timmins, and Mac Hollowell have come in and played well in roles that they normally would not have had given a healthy roster.
Such injuries, however, have required players to step up at both the NHL and the AHL level. For the Marlies, one such player who was given an opportunity and has seized it is Noel Hoefenmayer.
Hoefenmayer, a 23-year-old left-shooting defenceman, is having quite the season at the AHL level. The former Arizona Coyotes draft pick has 24 points in 25 games thus far, including nine goals.
His contributions have helped to stabilize an ever-shifting blueline and aid in the Marlies’ early-season success.
Prior to this year, Hoefenmayer had not had much success at the AHL level. He signed an AHL contract with the Marlies in 2020 after a successful five-year OHL career with the Ottawa 67’s. In the two seasons that followed, he spent time with both the Marlies and the ECHL’s Newfoundland Growlers, finding his stride last year in the ECHL with 40 points in 46 games.
The organization clearly liked what they saw in Hoefenmayer, re-signing him this offseason to a one-year AHL contract. Thus far, their belief in him appears to have paid off.
He has clearly proven that he can produce at a high level in the AHL; he currently sits fourth in scoring by defensemen. So, could Noel Hoefenmayer earn an entry-level contract with the Leafs? I took a look into his game to find out.
Hoefenmayer has been somewhat of a rover with the Marlies, not following all of the traditional positioning cues of a defenseman. He’s often seen jumping up into the rush and activating from the point toward the net to generate odd-man chances.
He has a strong offensive toolkit which allows him to capitalize on scoring opportunities. His shot is very strong, having beaten goalies cleanly from the point several times already this season. Furthermore, he has the ability to identify lateral passing lanes and execute subtle passes in the high slot leading to dangerous chances.
While he’s a relatively strong skater in transition, Hoefenmayer lacks a high level of mobility in the offensive zone with the puck on his stick. I wouldn’t characterize him as being an elite transition player, but his ability to identify opportunities to activate in a breakout and make quick passes on a counterattack makes him effective at driving play in the right direction.
On the defensive side of the game, Hoefenmayer can struggle. He routinely gets beat wide on opposing zone entries, very rarely actively engaging the opponent prior to the defensive zone. He can also occasionally get caught trying to do too much offensively, resulting in him chasing an odd-man rush. One further aspect of his game that can occasionally be problematic is his positioning. He is prone to getting lost in the defensive zone and chasing his man out of position.
Despite the impressive point totals, through watching Hoefenmayer it is clear to see that he is not particularly close to being NHL-ready. His defensive game and first-pass abilities will have to develop significantly before he can be seen as a viable NHL option. But Hoefenmayer is still only 23 years old and is clearly on a significant upward development trajectory. His offensive abilities are impressive and, with work, it’s entirely possible he could someday become an NHL option.
At this point, does this type of player profile justify an NHL contract with the Leafs? The team currently sits with just one contract slot which they’ll likely want to keep for flexibility at the trade deadline. For that reason, it is highly unlikely that he will see a contract offer in-season.
If he can continue his offensive output for the rest of the season, I would argue Hoefenmayer would be an asset worth protecting with a contract either after the trade deadline or in the summer. Last season, just three U24 defensemen who played 10 or more AHL games scored at a rate higher than Hofenmayer’s current minor-league pace. All three (Scott Perunovich, Sean Durzi, and Jack Rathbone) are relatively highly regarded in the NHL community.
While it’s clear Hoefenmayer will be a longer-term project, his results thus far have been promising. We’ll just have to wait and see whether the Maple Leafs offer him a contract.
Editorials
Recent articles from Colin Hunter