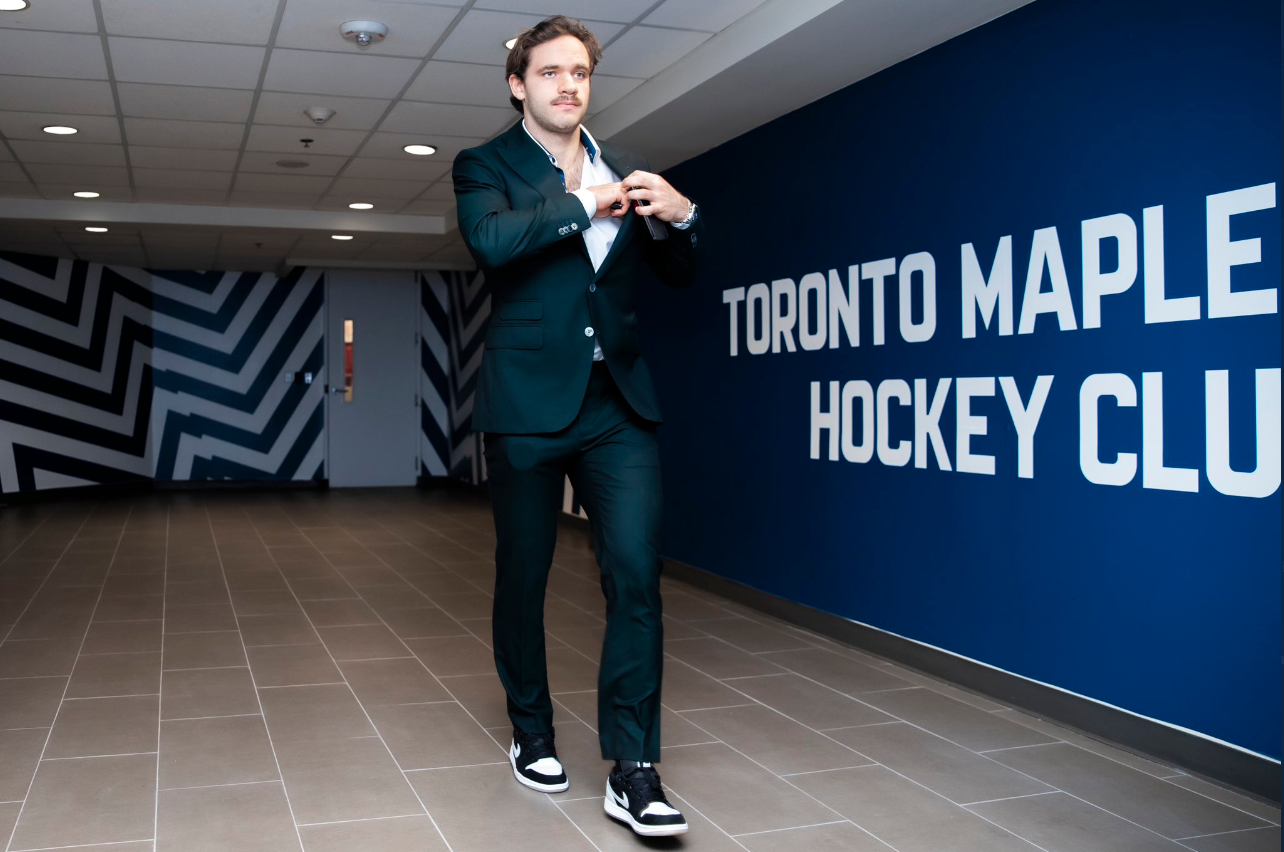 By Nick Barden
24 days ago
The Swedes, man. They’re good.
Fashion is such a broad topic, which makes it that much more fun to talk about. It’s always fascinating to see what athletes wear into the arena because it showcases their personality away from the game.
From what I can gather, though, it seems like Europeans have a better fashion sense than us North Americans. Now, I could be wrong, but in my experience when I travelled to Europe, it felt like they were just a bit further ahead in the trends.
They’d be dressing in a certain style, and then a few months later, people in North America would begin to dress like that. I say this only because our top three all come from different backgrounds outside of North America, which I think is really cool.
Anyways, welcome to Week Four of the Maple Leafs Gameday Fit Power Rankings.

Giordano missed out on last week’s rankings because there was no photo posted from the Maple Leafs’ social media. But he finds himself back in the top-five this week with a great look.
It’s nothing eye-popping, but the 39-year-old is walking into Scotiabank Arena looking like a professor at Harvard or Yale. This isn’t Miami Vice Giordano, which we saw in Week One, rather it’s the complete opposite.
But it’s still good enough to find himself in the top-five this week.

Brodie comes into this week’s rankings moving up one spot to fourth place. This is a really, really nice suit, and if you know by now (if you’ve read this series), I despise black dress shoes and socks.
Luckily for Brodie, the photographer only got one of his shoes in the photo, and even then it doesn’t look that bad. My favourite part about this fit is the white dress shirt with black buttons. For some reason, I like it a lot and Brodie really makes it work.
The moustache ties it all together.

This isn’t Matthews’ best, but it’s definitely not his worst either. I don’t think he’ll ever have anything bad. Matter of fact, he’ll probably make this top-five whenever the Maple Leafs get a photo of his fit.
That’s just how it goes.
I’m a huge fan of the pants he’s wearing in this photo, as well as the shirt and coat. Everything, actually, from the white Air-Force Ones on his feet — to the toque on his head — it’s all Matthews-esque.
But the Swedes have him beat this week, unfortunately.

If you remember back to last week, Liljegren was an honourable mention in the rankings because he was with the Marlies. This is actually almost the same exact fit from when he was down in the AHL on a conditioning loan.
But now, since he’s back with the Maple Leafs, he can re-join the rankings, and he jumps up them quite fast.
I love the dark green suit paired with the white shirt. I also am a big fan of the shoes on his feet as well. All in all, a very good look by Liljegren.

For the second time in this series, Nylander takes the top spot in these rankings.
Let’s begin with his suit jacket, which I’ve seen him wear multiple times, and I am really into it. I’m not sure why I like it so much — maybe it’s the extra buttons — but this fit starts with the jacket. Pairing it with a white shirt, that by the way, isn’t fully buttoned up, takes this suit to another level.
And finally, the shoes: they’re everything. I love Nike Dunk Lows and man, Nylander rocks them hard with this suit. 12/10 for the Swede and he’s earned the top spot this week.
Damn.
Editorials
Recent articles from Nick Barden