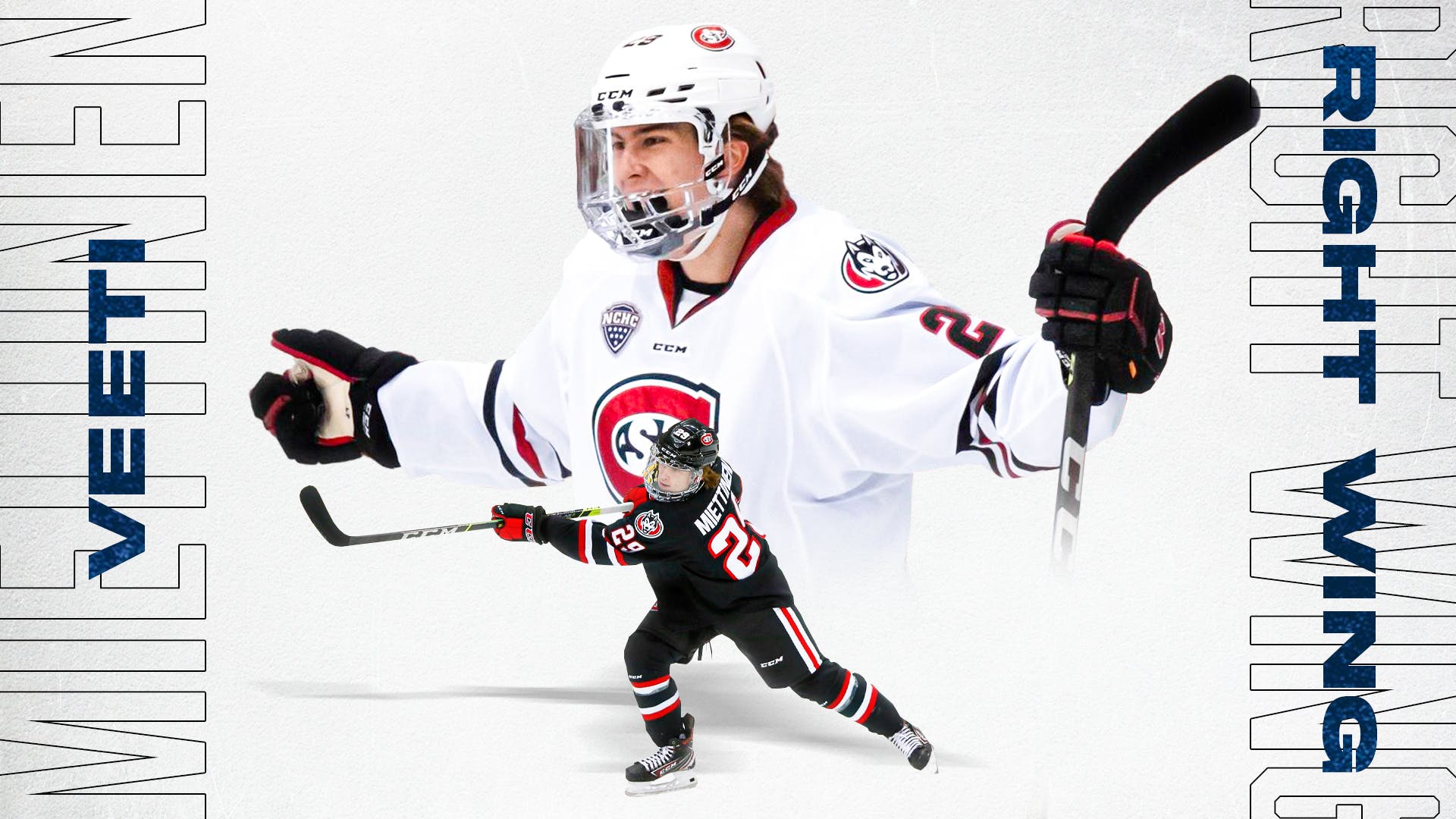 By Nick DeSouza
1 year ago
There aren’t many Toronto prospects I currently enjoy watching more than Veeti Miettinen. In hindsight, it seems silly that he wasn’t drafted earlier than he was. He’s the largest riser in The Leafs Nation Prospects rankings from 2020 to 2021 and frankly, he deserves it.
I personally ranked Miettinen the highest amongst the TLN writers at number 8. He’s already got an NHL-level shot and the maturity of his overall offensive game is impressive. After a stellar first season, he was chosen to be on the National Collegiate Hockey Conference (NCHC) All-Rookie Team and on the NCHC Second All-Star Team.
Position: RW
Age: 19
Height: 5’9
Weight: 159 lbs
Drafted: 2020 6th round, 168th overall
2020-2021 Team: St. Cloud State University
2020 Prospect Ranking: Honourable Mention

Miettinen finished his first season with St. Cloud State with 11 goals and 13 assists in 31 games. He led the team in points and it felt like something big was going to happen each time he stepped on the ice. For the majority of the season, Miettinen was hovering around a point-per-game production and his overall game was growing.
Things took a bit of a turn on March 12th, 2021. Miettinen was caught with a late knee-on-knee hit at the NCHC Frozen Faceoff Quarterfinals.
Up to that hit, Miettinen had 23 points in 24 games. He was averaging 2.7 shots a game and was contributing in more ways than just scoring. Luckily, the injury wasn’t too serious as Miettinen returned to the lineup for the Semi-Final. For the remaining seven games of his year, Miettinen finished with only one goal and zero assists. His shot totals also took a dip averaging 2.1 shots a game. To add some context, games got a lot tighter as they entered the knockout games. In addition, St. Cloud became a strong neutral-zone trap team and really seemed to focus on maintaining a defensive structure when in their own zone. The team took fewer chances in general than in the regular season, and games weren’t as high event. As a result, it’s tough to say whether the knee-on-knee played a role in Miettinen’s drop in production or whether it was the playoff-style games.

Quite simply, Miettinen is a dynamic offensive forward. His shot is his biggest weapon and he can generate power in a number of different ways. He has a great wrist shot, stationary slap shot, and can tip pucks around the net. He can curl and release which goalies have a ton of trouble tracking. In my opinion, his shot is already at an NHL level despite being 19 years old.
A few minutes after hitting the post in this game….. He scored.
I wouldn’t call Miettinen a high-end passer. He doesn’t thread passes through seams often and doesn’t create passing lanes through his movements with the puck. In contrast, the fear of his shot creates passing opportunities. Teams are forced to move into the shooting lane and that leaves space for his teammates. Miettinen is a shot-first player (as he should be) but if he can pick out open teammates as he’s faking his shot, he will be an even larger problem for the opposition.
He still has room to improve as a puck carrier as well. He can successfully stickhandle through traffic in the neutral zone but not at a very high rate. He also doesn’t back defenders off the blue line using his speed at the collegiate level. This season, Miettinen usually deferred to his teammates in transition. This worked for Miettinen as he finds space really well. He would usually trail the play, allow his teammate to enter the zone, and then receive the pass with ample room to work with.
Without the puck:
One of my favourite things about Miettinen is his ability to get lost in the offensive zone. Despite being one of St. Cloud’s top scorers, Miettinen was able to erase himself from the view of his opponents by traveling within their blind spots. It takes great timing and an awareness of where the play is heading to do this well. In the clip below, Miettinen sneaks around the ice generally unnoticed. As a result, he tips two pucks uncontested. The second tip goes in.
On the forecheck, Miettinen is most effective when used as the F3. He reads the game well and can jump onto loose pucks created by his linemates. His size and overall relaxed demeanor off the puck limit him as an F1/F2 though.
Miettinen will need to work on his play in the defensive zone. He tends to puck watch and looks disengaged at times. Going forward I’d like to see Miettinen become more active off the puck. Fellow Leafs prospect Nick Robertson also has a great shot and offensive upside but it’s his motor that really separates him from other skilled prospects. So much so that Sheldon Keefe felt comfortable dressing him in a five-game playoff series against Columbus. Miettinen doesn’t need to develop a Robertson-like work ethic off the puck, but it would certainly help his defensive game going forward.

Veeti Miettinen will be with the St. Cloud State program for at least one more season. He’s a few years away from being NHL ready (if he ever gets there), but his upside is large. My high TLN prospect ranking for him is driven by his potential but also considers the fact that I believe his floor is higher than expected as well. He would certainly benefit from becoming a better F1 forechecker and neutral-zone transition player but he doesn’t need to become NHL-good in these areas. Thanks to his shot and overall offensive toolkit, I think a team can work around these deficiencies in a similar way to how St. Cloud is right now-by pairing him with strong puck-carriers and ferocious forecheckers.
In contrast, Miettinen will definitely need to improve defensively as it’s tough to work around that. Professional coaches don’t seem to have much time for players who they can’t trust at 5v5, just ask Jeremy Bracco. Miettinen’s production fell off at the end of the season, but hopefully, it’s just an outlier. His role on St. Cloud should expand next year and hopefully, we see an even better version of Miettinen.
As a sixth-round pick, he’s easily the biggest dark horse in the Leafs prospect pool in my opinion and we will continue to see whether he can reach his potential.
Uncategorized
Recent articles from Nick DeSouza

Uncategorized
In their final game before the All-Star break, Toronto falls to Boston