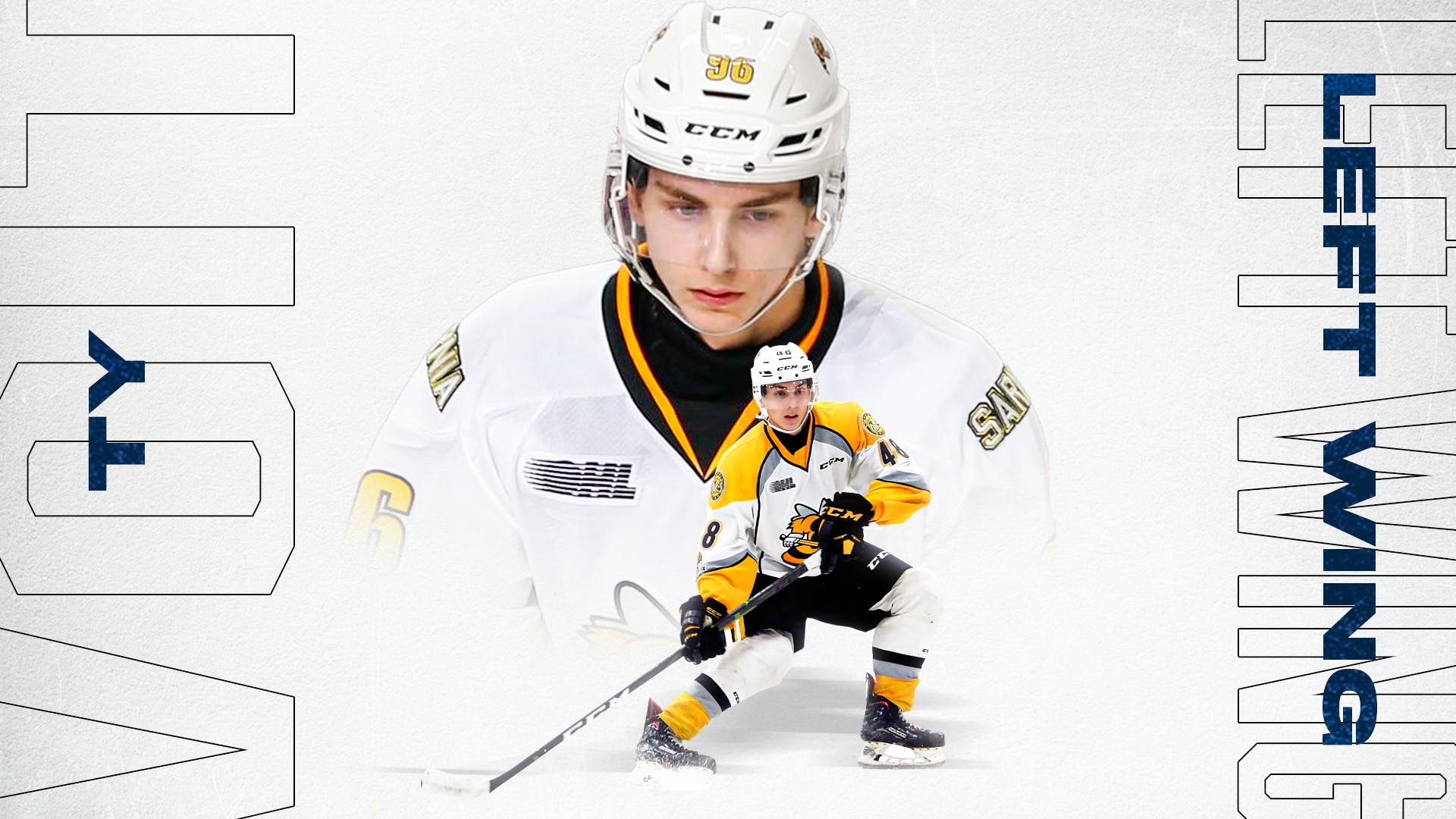 The Leafs were without a first-round pick and made just three total selections in the 2021 NHL Draft but their fifth-round pick, Sarnia Sting forward Ty Voit, has the potential to become one of the steals of the draft.
Voit had a solid first season in the OHL in 2019-20, tallying eight goals and 20 assists in 49 regular season games while averaging just under 14 minutes of ice time per game. His strong rookie campaign with the Sting put him in the conversation as a potential early-round pick for the 2021 draft, and he was ranked as high as number 27 on EliteProspects.com’s January draft rankings.
Unfortunately for Voit and countless other draft hopefuls, the OHL season never got underway in 2020-21 and he was unable to maintain – let alone build upon – his draft stock. The only hockey he was able to play during his draft year was at the PBHH Hockey Showcase in Erie, an event put on by fellow OHLers looking to put their skills on display ahead of the draft, where he recorded three goals and six assists through 10 games. Those unfortunate circumstances, however, may end up benefitting the Leafs as it seems rather unlikely that Voit would have fallen all the way to the fifth round had the OHL played in 2020-21.
Position: W
Age: 18
Height: 5’10”
Weight: 161 lbs
Drafted: 2021, Fifth round, 153rd overall
2019-20 Team: Sarnia Sting, OHL
2020 Prospect Ranking: New
Voit makes his TLN Leafs Prospects Ranking debut at #18 but much like I believe he will out-perform his draft position, I suspect he will find himself much higher on this list a year from now. Missing an entire season’s worth of development at such a young age certainly isn’t ideal but Voit will step into a much larger role upon his return to the Sting than the one he held as a rookie, which should provide him ample opportunity to show his growth as a player.
Voit is a highly talented offensive player who impacts the game with his vision, passing ability, intelligence, and work ethic. Listed at 5’8″ during his rookie season in the OHL, he has added a couple of inches to his frame over the last year and that extra bit of height will prove valuable as he continues to add muscle in the coming years.
His lack of size doesn’t seem to deter him from going to the tough areas of the ice, however, and while he might not be tenacious in the sense that he hits everything that moves, he is tenacious in the sense that he isn’t afraid to take a hit in order to make a play. Over the years, Voit has learned to use his body to his advantage by playing between checks and using his lower center of gravity to protect the puck in tight areas.
Voit’s greatest assets are his vision and the way he is able to create deception on his passes. He can execute skilled plays at high speed and identifies his options early, allowing him to make quick decisions with the puck on his stick. His ability to layer moves and quick passes on top of one another makes him a dynamic offensive threat.

“Ty can pull you out of your seat with his skill. He can make plays in traffic and has a scoring touch that we believe will make him one of the better players in the OHL in the years to come.”
– Dylan Seca, Sarnia Sting General Manager

Check out this play where Voit identifies the turnover, attacks the space in the slot, and has all but made up his mind that he is going to hit his teammate with a cross-slot pass before the puck even comes to him:
Voit doesn’t always need a clean passing lane, either, and has the ability to complete difficult passes through layers of coverage. He has great spatial awareness and keeps his feet moving to make himself available as an outlet or to prepare for a return feed on a give-and-go play. This sequence is a good example of both of those attributes:
Though he could still stand to add some explosiveness to his stride, Voit is a strong skater with good four-way mobility that allows him to weave in and out of traffic while maintaining control of the puck. He reads the play very well and knows when to activate into space in the offensive zone to create scoring chances. He has good puck handling skills as well, and can beat defenders cleanly when the opportunity presents itself:
Voit’s intelligence and effort level aren’t confined to the offensive end, and though he isn’t likely to develop into the next @Mark Stone, he plays a solid defensive game and works to re-establish possession for his team. He can read the play to jump into a passing lane at the last second, get underneath an opposing player along the boards to disrupt possession, or track down a puck carrier and steal the puck with a crafty stick lift.
A player can have all the talent and skill in the world but very rarely does anyone become an impactful NHL player without a strong work ethic and commitment to improving. That won’t be an issue for the Pennsylvania born winger as he has earned rave reviews for his dedication both on and off the ice.

“Ty is a dedicated player both on and off the ice. His training regiment is second to none.”
– Dylan Seca, Sarnia Sting General Manager

With so few picks in the 2021 draft – especially in the early rounds – the Leafs took a calculated swing on a player with plenty of offensive upside in the fifth round. This regime values hockey sense above all else and Voit has it in spades, in addition to a pretty enticing offensive skill set. He will be one of the more interesting prospects in the Leafs’ system to monitor this coming season as he returns to Sarnia after going an entire season without playing any meaningful hockey.
He is still a few years away but Ty Voit has the potential to develop into the type of secondary offensive threat that the Leafs’ roster has been sorely lacking in recent seasons – and he could become even more than that.
(Statistics from EliteProspects.com)
Uncategorized
Recent articles from Nick Richard