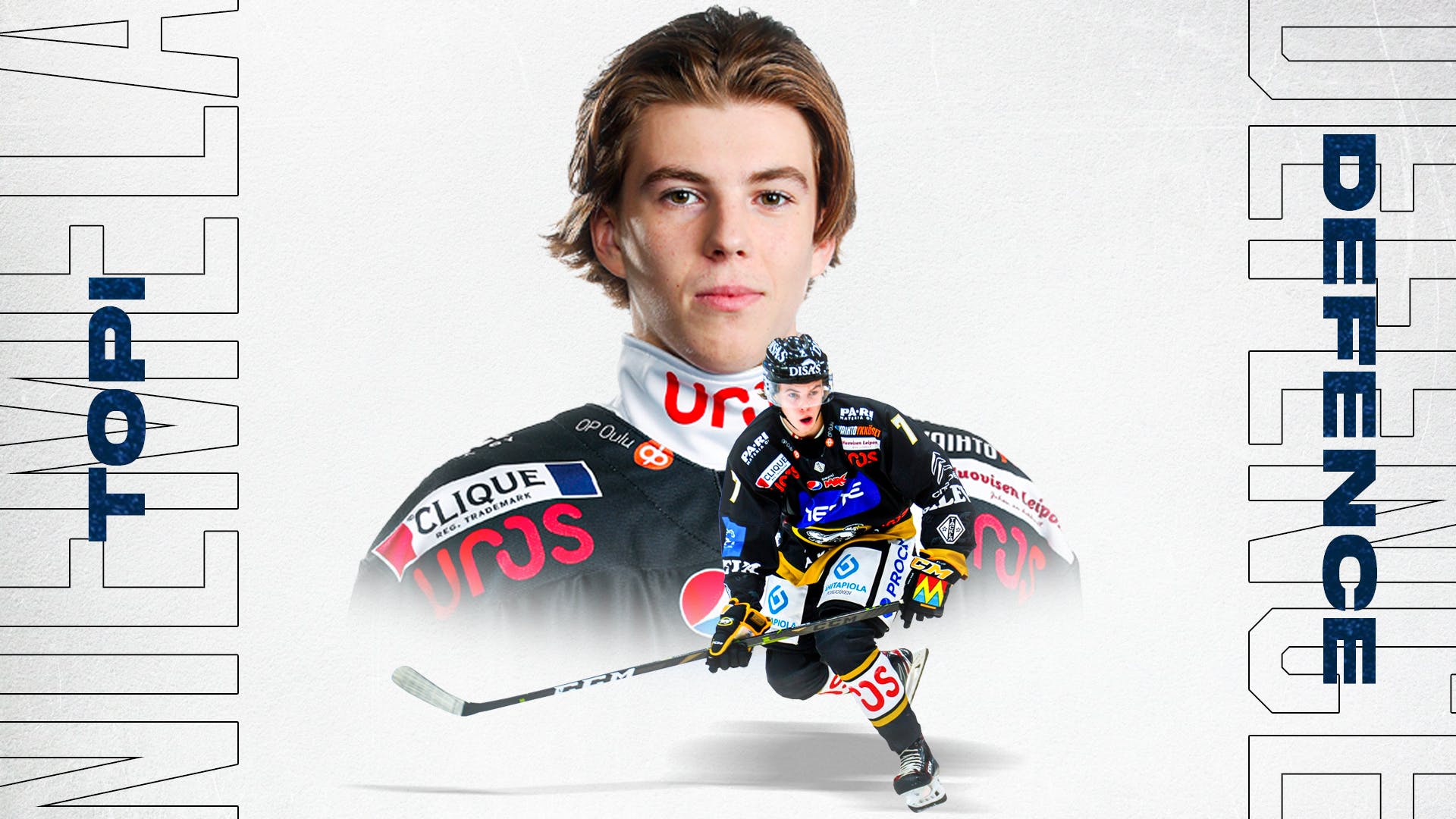 By Jori Negin-Shecter
1 year ago
Back in October 2020, the Maple Leafs traded back from pick 44 to acquire two picks on the virtual draft floor of the 2020 NHL Entry Draft. The first of those picks, selection number 59, was used on Finnish centreman Roni Hirvonen, who has grown into an intriguing prospect in his own right for the Maple Leafs. The other prospect the Maple Leafs parlayed that 44th pick into, pick 64, ultimately turned into arguably the best defensive prospect in the entire Maple Leafs’ system in Topi Niemela.
Niemela burst onto the scene for Maple Leafs fans with his 2021 World Junior Championship tournament performance, a spectacle that culminated with him winning the tournament’s Best Defenceman honours. In the months that followed, however, as fans turned their attention away from the youngster and towards the NHL club, Niemela continued to grow his game, and now finds himself as a huge part of the Toronto Maple Leafs’ future plans.
Position: Right Defence
Age: 19
Height: 5’11
Weight: 165 lbs
Drafted: 64th Overall, 2019 NHL Draft by The Toronto Maple Leafs
2020-21 Teams: Oulun Kärpät, Liiga (15 GP)
2020 Prospect Ranking: #9

Niemela’s past 10 months as a Toronto Maple Leafs prospect have been practically nothing but upward momentum. Even as the ink dried on the Maple Leafs’ selection, experts raved about the pick by Kyle Dubas and his team. Since that October evening, Niemela has been marvellous and shown the entire hockey world that selecting him was a spectacular decision.
Niemela began his season on Oulun Kärpät’s top pair and started off his Draft+1 (D+1) season with the same steady playmaking and strong subtleties that made him so coveted by the Maple Leafs in the first place. His strong skating and excellent hockey IQ were very much on display to start the year as he scored 3 points through his team’s first 10 games, a great marker for a D+1 defenceman playing on a high-quality Liiga team.
Of course, the biggest moments of Niemela’s year would happen while he took to the ice in Edmonton for the 2021 World Junior Championships. The youngster’s play turned the hype up to 11 on the dial, as he dazzled in front of a national audience. No defenceman at the tournament looked nearly as effective and dangerous as Niemela where he demonstrated to fans across the world that he was working with a special toolkit.
Niemela’s 8 points in 7 games ranked comfortably tops amongst all defencemen, and his play outside of the box score earned him equally high praise from across the hockey community. The Finn made minced meat out of his similarly aged peers as he made crisp breakouts, defended his gaps with confidence, and even pitched in with some thunderous play with the body, impressive given his smallish stature from the backend.
Overall, Topi Niemela had proven that his 3rd round selection was nothing short of larceny. With his bronze medal in tow, Niemela headed back to his native Finland to play out the rest of the season. At least, that had been the plan. Following a strong six-game stretch with Oulun Kärpät to begin February, Niemela took an extremely unfortunate spill into the boards that promptly ended what had been an unbelievable coming out party of a year for Niemela.
In all, Niemela tacked on one more point in February to finish off his abbreviated 2020-21 with 4 points in 15 games. The Kärpät rearguard also finished with the highest primary point rate per game amongst D+1 Liiga defenceman in his class. By the analytics, as found directly on the Liiga website, Niemela boasted the best possession numbers of any player with 15 or more games played on his team, dominating competition to the tune of a 63% raw corsi for percentage. Niemela showed a strong mix of offensive play driving capabilities (8th on his team CF/gp) and defensive play driving (6th on his team in CA/gp).
Finally, while his new season has yet to begin with Kärpät, we did see Niemela make a return from his shoulder injury in spectacular form at the World Junior Summer Showcase this past July. Just as he had done at last year’s World Junior Championship, Topi Niemela was at the top of his game, finishing 5th in tournament scoring and tops in scoring once again amongst his defensive peers.

Regarding what the eye test has to say about Topi Niemela’s play, there’s plenty to love when watching how the 19-year-old processes the game. As has been reiterated, Niemela’s skating is undoubtedly his best asset, and while he isn’t a burner, his agility is top-notch and usually helps him move the puck in the right direction. At his current level, he’s spectacular at entering the zone, a skill that is certain to become increasingly important when he inevitably makes his way over to North American soil.
Even when not moving the puck up the ice with his legs, Niemela is able think the game at a high level. He has proven that he can find seams in the forecheck to move the puck effectively out of the zone via his available passing lanes. Check out this slick zone exit pass from last December where he survey’s his options, evades the oncoming forechecker, then darts a delicious saucer pass right to the tape of his Finnish teammate.
Last but not least, Niemela’s no slouch when it comes to special teams play as well. While playing for Kärpät, he demonstrated some touch on the powerplay at times, and while his play in the offensive zone can be a work in progress, he’s demonstrated that his vision and capabilities translate nicely to play with the extra attacker.

Topi Niemela’s upside clearly resides in the top four of an NHL blueline, especially given his right-handed shot, which will undoubtedly provide him with an extended runway. His skill set is tremendous, and while he has yet to truly “pop” against men in Europe, he’s undoubtedly on the precipice of something special. He’ll spend the next year in Europe, with a likely appearance as a headlining name and leader on the Finland World Junior Team, with a chance to come over to the Toronto Marlies towards the end of this year or the beginning of the next season.
Niemela has very little left to prove with his Finnish team in terms of whether he can stick or not. Even as the Finnish preseason gets underway, Niemela remains a fixture on his club’s top pairing and will look to continue dominating in a league he is likely to outgrow quickly. If Niemela can continue to grow his offensive game and chip in even more from a point production standpoint, then there’s no telling just how important a prospect Niemela could be for the Maple Leafs long term. The sky is truly the limit, and Niemela has the toolkit to make it very far in his hockey career.

“Niemelä played a huge role at the WJSS, averaging just under 24 minutes of ice time per game, including time on both special teams units, and appears locked in as Finland’s top defenseman heading into the World Juniors. The young Finn drives play from the back end with good defensive reads and the mobility to elude oncoming forecheckers. His skating ability helps him maintain tight gaps in defensive transition because he can quickly recover on occasions where the play gets behind him. He still needs to add strength to his slight frame to become a more effective in-zone defender but he is a willing combatant in front of his net and along the boards, and his size doesn’t hold him back as much against his peers as it does at the Liiga level. The strongest parts of his game are his skating and overall hockey sense, and those skills should put him in contention for top defenseman honors once again when the World Juniors get underway.” – Nick Richard, Dobber Prospects/The Leafs Nation
“Niemela is an effortless skater and accurate puck distributor who can take matters into his own hands when the chips are down in his own end. Defensively, he displays a strong upper body and can win one-on-one-battles behind the net, and Niemela is more than willing to engage and fight for positioning — He definitely is NOT a pushover against bigger forwards. Niemela looks to cover slot while using hard shoves or an active stick to ensure the opponent he’s battling.” – Steve Kournianos, The Draft Analyst
A great video breakdown of what makes Topi Niemela so great by Youtbe Channel Hamish Reid

There’s is oh so much to love about Topi Niemela’s promise and potential, and Maple Leafs fans will surely want to keep close tabs on this outstanding prospect as he inches closer to his seemingly inevitable NHL future.
Uncategorized
Recent articles from Jori Negin-Shecter