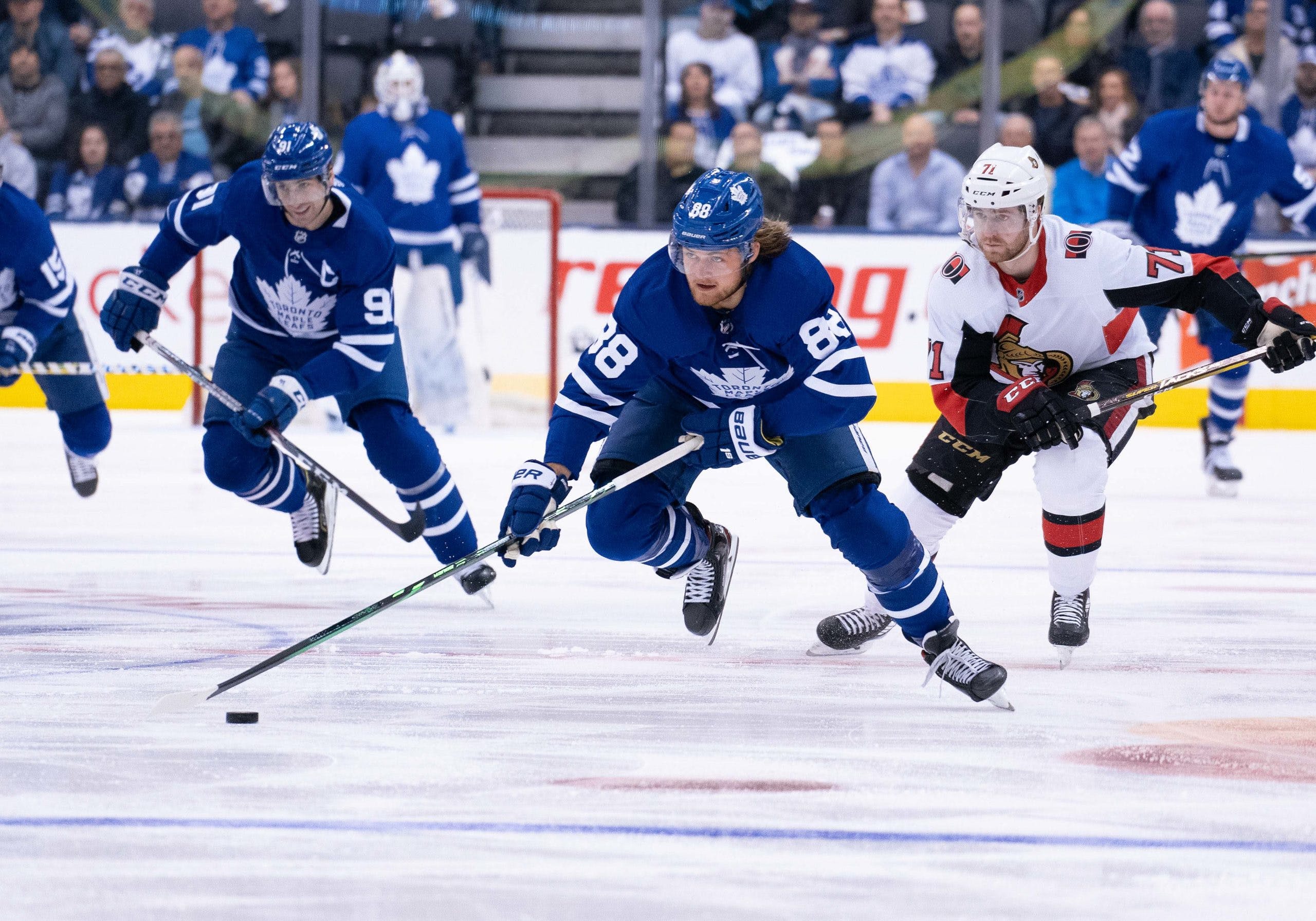 By Brendan Mori
2 years ago
The Toronto Maple Leafs are back in action tonight as they take on the Ottawa Senators in their home opener of the 2021 season. Last game, the Maple Leafs defeated the Montreal Canadiens 5-4 in Overtime thanks to Morgan Rielly’s OT winner.

Tonight is the highly anticipated NHL debut for 2020 second overall pick Tim Stutzle. Along with Stutzle, the Senators will also have Josh Norris and Drake Batherson in the lineup tonight, two players who lit the AHL on fire with Belleville last season. Brady Tkachuk and Thomas Chabot are also a year older, giving Ottawa a nice core of young players (unfortunately).
A year removed from finishing second last in the NHL, this season looks like a transition year for the Sens, as they try to build a contending team. The Sens added vets such as Derek Stepan, Evgenii Dadonov, Erik Gudbranson and Matt Murray to help ease the burden on the youngsters on the team.
The Senators are still a work in progress, but I wouldn’t be proclaiming a season sweep by the Leafs this season. I would expect the Leafs to have to really earn every two points against the Sens this season. DJ Smith did an excellent job last season of getting the Sens to buy into being a harder team to play against.
On the flip side, the Leafs semi-youth of Auston Matthews, Mitch Marner and William Nylander were dynamic on Wednesday. All three players look poised to take their games to another level this season and I cannot wait to watch.
The Leafs looked very sloppy at times on Wednesday against the Canadiens, but I would chalk that up to the abbreviated training camp and no pre-season games. Hopefully the additional practice time between games allowed Sheldon Keefe to clean up some things and for the Leafs players to also continue building chemistry with their linemates.
Speaking of linemates

Auston Matthews has recorded 22 points (13 goals, 9 assists) in 15 career games vs. the Senators. To say that Matthews enjoys playing against the Senators would be an understatement. Against the Canadiens on Wednesday, Matthews was buzzing all over the ice, but couldn’t buy a goal.

As mentioned earlier, Stutzle will be making his NHL debut tonight on a line with Derek Stepan and Evgenii Dadonov. Stutzle finished fourth in scoring with 10 points (five goals, five assists) in five games at the World Junior Championships. Stutzle is the kind of player who can get you out of your seat (although not in a good way if you’re a Leafs fan).

Andersen gets his second straight start tonight, with Jack Campbell getting his first action tomorrow night. In game one, Andersen looked shaky at times, which is to the surprise of no one. It has been well documented how Freddy starts every season relatively slow. With this season being a mere 56 games, it’s important Freddy finds his game sooner rather than later.

Matt Murray will be making his Senators debut tonight as well. Murray is coming off of a disappointing season with the Pittsburgh Penguins last season. He posted subpar statistics and also lost his net to Tristan Jarry. The two-time Stanley Cup winner will certainly be heading into this season looking to silence his critics. Look for the Leafs to shoot high glove on Murray all night long.