The Leafs 3 stars of the week: Auston Matthews, Mitch Marner continue to dominate the scoresheet 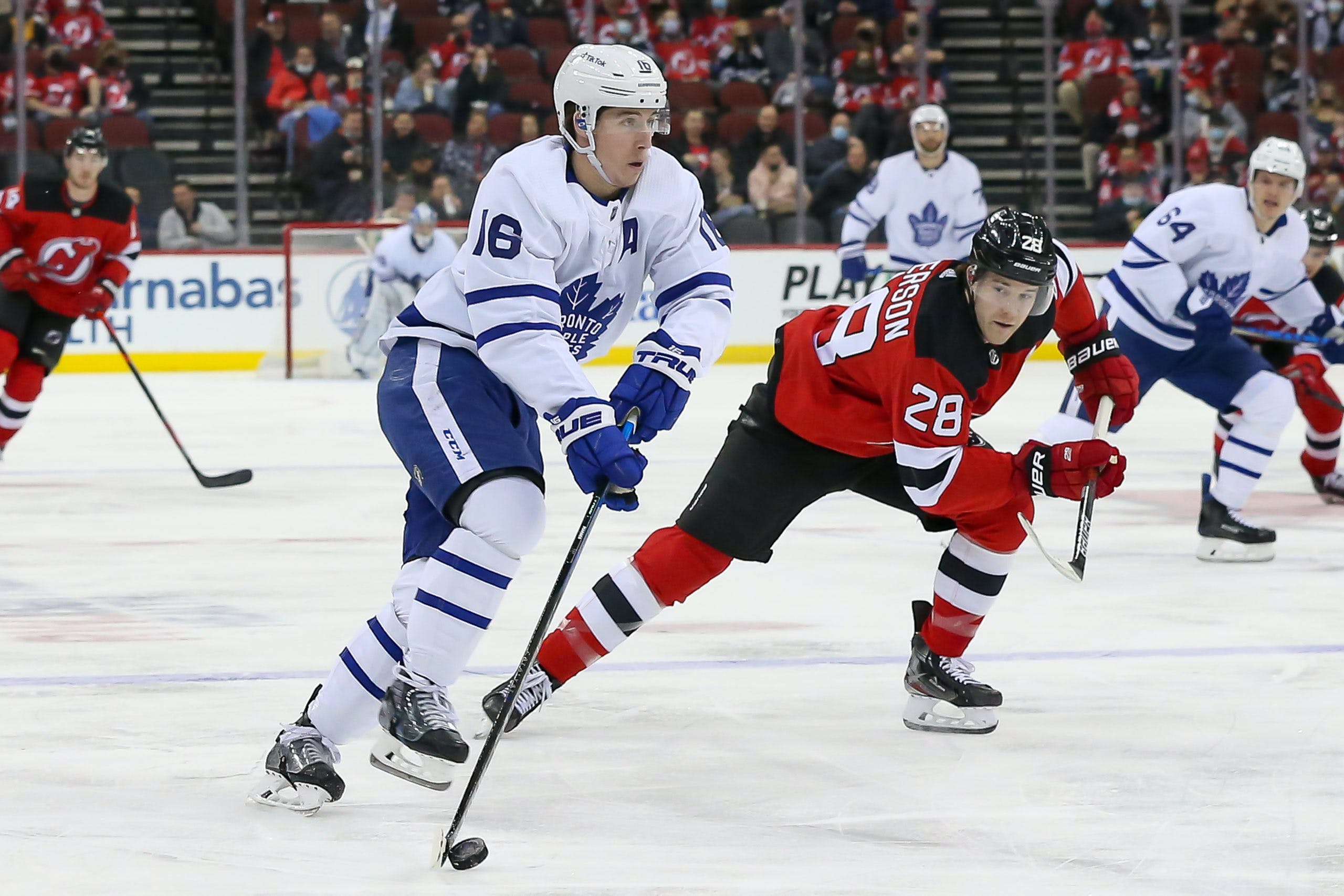 By Joseph Zita
9 months ago
The Toronto Maple Leafs were entering their last week of the first half of their season before heading into the All-Star break where they would see two fellow teammates, Auston Matthews and Jack Campbell take in the festivities down in Las Vegas. The Maple Leafs had only two games set on their schedule yet again, it was a back-to-back, home and home against the struggling New Jersey Devils, so these two games were basically must-win for Toronto heading into the break.
They opened the week at home on Monday and they didn’t quite have the best start to the game and it’s kind of been a recurring theme with this team as of late. Just like the game prior against the Detroit Red Wings, the Maple Leafs started very slow and had to claw from behind and score five straight goals in the third period to pick up the win. Well, after going down 3-1 and then 4-2 against the Devils, the Maple Leafs clawed their way back and picked up a 6-4 win on the first half of the back-to-back.
The next night they were in New Jersey and after coming off yet another come from behind victory, I think it was safe to say the Maple Leafs wanted to start on time this time and unlike games in the past, get a lead and hold on to it without choking it and stressing out the entire fanbase. Well, that’s what they did as they flat out dominated the Devils in their own arena and walked away with a very, very impressive 7-1 win as they scored four of those goals in the very first period.

The third star of the week goes to someone who has been such an important piece to this team ever since returning from his injury that he sustained back during the pre-season, it’s Ilya Mikheyev. Mikheyev has been a major bright spot in this lineup ever since returning back to the lineup after injuring himself in a preseason game before the regular season even got underway. We all know Mikheyev is a player who is fast, strong, reliable defensively, but he’s now showing all of us that he can actually finish the chances he’s creating and show up on the scoresheet more often than not now.
In the two games against the Devils last week, Mikheyev registered one goal and two assists in both wins and improved his season point totals to seven goals and three assists for 10 points in just 13 games. On an 82 game pace, that’s a 63 point pace for the Russian winger, so that just goes to show how well he has been playing offensively for this Toronto team ever since returning, and not to mention how important he is already on the penalty kill too and the type of role he plays on that third line for Sheldon Keefe as well.
Whether he stays on the third line for good or moves up the lineup again eventually, I think it’s good to see that he is producing wherever he is in the lineup and is taking it upon himself to shoot the puck more than he ever has. In 13 games this season he has a total of 37 shots and earlier on in January after returning, he had a total of 17 shots during a three-game span between the Ottawa Senators, Edmonton Oilers, and Colorado Avalanche.

It was yet another successful week for Auston Matthews as he is this week’s second star after two dominant games against the New Jersey Devils. Matthews, who has arguably been the Toronto Maple Leafs’ MVP this season, just keeps showcasing his talent and showing the hockey world why he is one of the very best in the league and arguably the best goal-scorer too. After a historic season last year for Matthews and walking away with the Rocket Richard trophy, he has not slowed down this season and is on pace for his best season yet.
He opened up the week last Monday with his fifth career hat-trick and also tallied an assist that night too as he registered four points in their 6-4 comeback win over the Devils. Following up his four-point night and registering his fifth career hat-trick, Matthews continued his stellar play into New Jersey and had himself yet another multi-point game this season as he scored his fourth goal in the last two games and tallied yet another assist in Toronto’s dominant 7-1 win on the road.
Matthews collected six points in those two games against the Devils and is also currently on a four-game point streak – four goals and six assists – where he has 10 points in those four contests and has been really effective in all three zones on the ice too. So whether it’s his goal scoring, underrated playmaking, or even his defensive play, Matthews is still finding more ways to dominate on the ice and help lead his team to victory everytime they play someone. Matthews’ season point totals now sit at 29 goals and 22 assists for 51 points in just 39 games. That is a 107 point pace over a full 82 game schedule, but given he has missed three games, he is on pace for 103 points and 59 of those points being goals.

I feel like a broken record as of late when I talk about Mitch Marner and not only the type of season he is having when you look at his point totals, but the type of impact he has had on this team ever since returning from his injury/COVID protocol list. He returned back into the Leafs’ lineup on January 15th when they were in St. Louis and that game began Marner’s current goal/point streak and during that streak he has been absolutely electric out there on the ice, whether it’s offensively or defensively, Marner is getting the job done and is helping lead the team to victory.
Yes Matthews had six points in those two games against the Devils, but Marner did a little better than that and registered seven points in those two games and is also on a seven-game goal/point streak as I mentioned above. Now the point streak isn’t all that impressive for a player like Mitch Marner, but it’s the goal streak that is really impressive and the fact that it’s at seven games right now and also the fact that he has eight goals in that stretch too.
For someone who is known as an elite playmaker and a pass first winger, Marner has always scored at a 20-25 goal pace throughout his career and everyone knows he has a pretty good shot too but he just rarely uses it. However, during this stretch of games he is clearly showing it off and has himself 14 goals this season already which is a 35 goal pace over 82 games but since he has missed a total of nine games he is now on pace for 31 goals, which is still pretty impressive and would be his first 30-goal season in his career. Marner currently has 14 goals and 23 assists in 33 games this season for a total of 37 points and has been a tremendous addition to the penalty kill too ever since he was slotted back into the lineup against the St. Louis Blues in mid January.
More from theleafsnation.com
Uncategorized
Recent articles from Joseph Zita