The Leafs 3 stars of the week: Mitch Marner and his goal streak, Pierre Engvall playing some of his best hockey 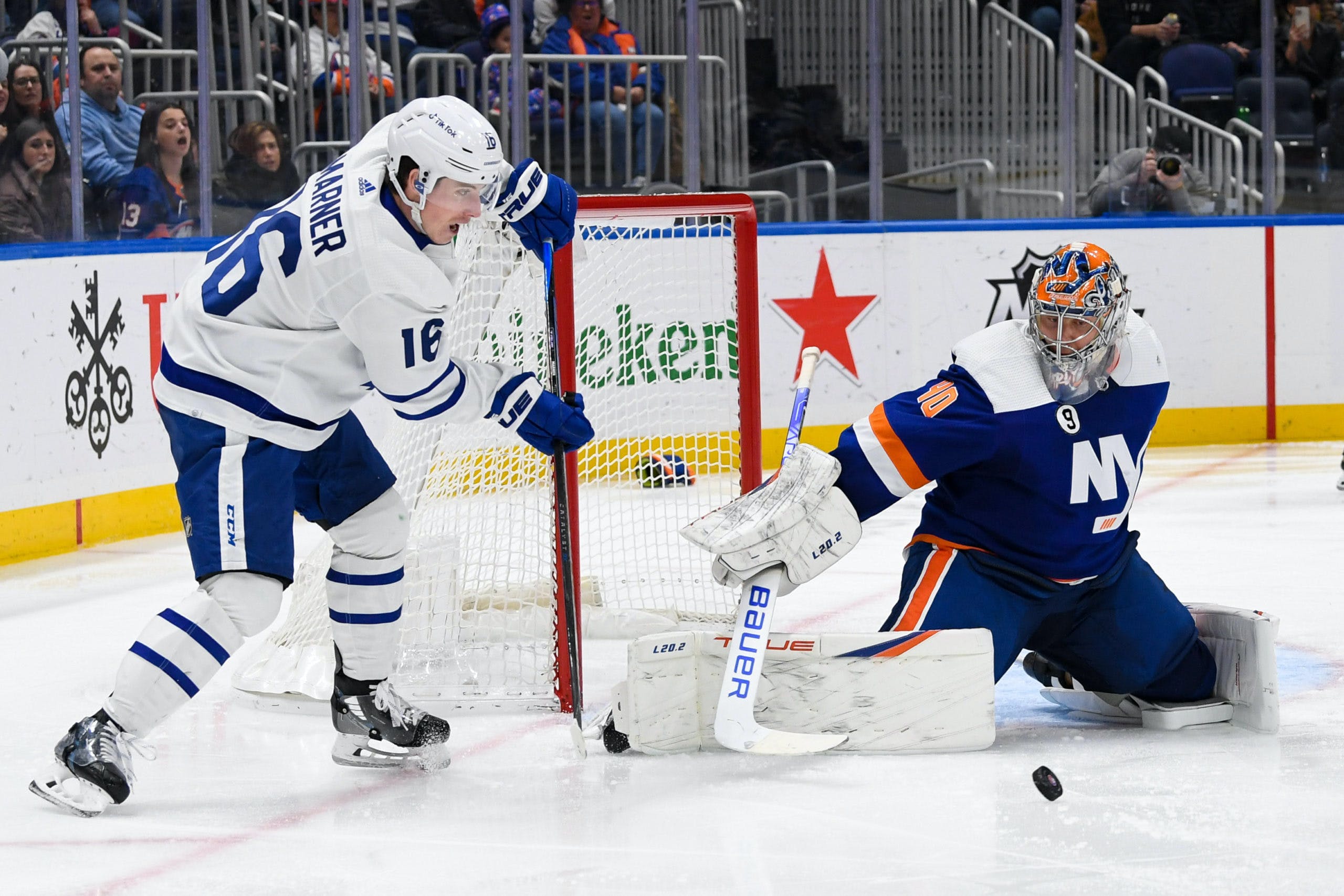 By Joseph Zita
10 months ago
Nearing the end of the Toronto Maple Leafs’ current six-game road trip, the team was looking to finish the trip on a high note after blowing multiple multi-goal leads in three of their previous four games and losing two games on this trip too. After falling short in overtime to Colorado, Toronto then followed up that game with a shootout win over Vegas, but not soon after played a great game against arguably the worst team in the league in Arizona but came up against Dominik Hasek himself in net and lost 2-1 in regulation
They then travelled to St. Louis to play the Blues and played yet another stressful game where they blew another multi-goal lead but somehow found a way towards the end of regulation to secure the two points and move on to the next two games against both New York teams. They entered Wednesday night’s game against the Rangers currently having picked up five out of the possible eight points on this road trip, so you know they wanted to end this trip with two wins and also get revenge for the Rangers’ win against them earlier on this season.
Well, just like the game against the Blues, and the Golden Knights, oh, and the Avalanche, the Maple Leafs played a great 20 minutes and then proceeded to blow a multi-goal lead, but this time, they gave up five straight goals and lost 6-3. Just a terrible second half of the game for Toronto that is inexcusable. They finished off the trip against the Islanders, and this time Petr Mrazek got the start for Toronto and I agreed with this decision. Not only was it a great bounce-back game for the Maple Leafs, but it was also arguably Mrazek’s best game as a Maple Leaf in the net too as they picked up an impressive 3-1 win.

It was yet another solid week for defenseman Morgan Rielly as he potted home his fifth goal of the season and tallied yet another assist during week 15 against both the New York Rangers and the New York Islanders. After picking up last week’s third star of the week, Rielly is back again with another third-star appearance for the Toronto Maple Leafs after displaying great offensive and defensive plays during these two road games in New York.
Rielly didn’t register any points during the Maple Leafs’ 6-3 loss to the Rangers Wednesday night, but he had himself yet another multi-point game against the Islanders Saturday night while coming up with a couple of huge defensive stops in the defensive zone when the Islanders were trying to get themselves back into the game after falling behind by multiple goals.
Rielly has had himself a very, very good season thus far and it honestly feels like it’s been kind of an underrated season given how many other defensemen in the league are having themselves great seasons as well. Rielly, in 38 games, has himself five goals and 28 assists for 33 points this season, which is a 71 point pace for the 27-year-old defenseman who would have himself his second 70-point season in his career. As I said last week and multiple times this season, it feels like Rielly has really taken that next step in his game ever since he signed that contract extension with Toronto earlier on in the season, and it’s a great thing to see given that he’s maturing on both ends of the puck and not just the offensive side.

This man right here just scored probably the best goal of his career against the New York Islanders Saturday night and honestly, has been playing some pretty good hockey – along with the entire third-line – as of late and has been a key factor on this Maple Leafs team thus far. On Wednesday night against the Rangers, Engvall dished a nice pass to set up Mikheyev for his sixth goal of the season which gave Toronto a 1-0 lead early on in that game. He then followed up that game with last night’s game where he pulled off a nasty toe drag around defenseman Andy Greene and then barely beat Semyon Varlamov as it trickled past him and slid past the goal line with just 0.3 seconds remaining in the first period.
On top of registering a goal and an assist in those two games against both New York teams, Pierre Engvall is actually looking more involved over the last couple of games and it’s honestly a good thing to see because you need your bottom-six to look engaged more often than not throughout the season, especially if your top-six is not getting the job done for your team. In his last two games during week 15, Engvall had himself a combined two points – one goal, one assist, eight shots, and three hits.
However, he is currently on a three-game point streak which started back in week 14 against the Blues where he tallied two assists in that back and forth win. So over his last three games, he has four points – one goal, three assists, 10 shots, and three hits while averaging a pretty solid 12 minutes of ice-time in those last three contests.

In just his third game back from the COVID protocol list, Mitch Marner has had himself quite the return to the Toronto Maple Leafs’ lineup and has found himself on the scoresheet in every single game he’s played in since returning. After slotting back into the lineup against the St. Louis Blues on January 15th, Marner has registered five points in three games so far and three of those points have come in the last two games against both the Rangers and Islanders.
Marner finally – and I mean finally – threw that monkey off his back as far as he could after he buried his first power-play goal in a very long time against the Rangers as he one-timed a pass from Nylander who dished it off to him from the slot. That goal from Marner gave the Leafs a 2-0 lead at the time and also gave him points in back-to-back games since returning to the lineup. On top of his goal last Wednesday, he continued his production with an assist that night and then another short-handed goal against the Islanders for the second time this season in the exact same arena as well.
It’s no secret that with Marner out of the lineup there’s a massive hole and not one person can replace him, they have to fill the hole by committee. So with him returning back into the lineup after his injury and coming off the COVID protocol list last week, it’s a massive addition to this lineup, whether it’s five on five, power-play, or even the penalty kill, as he’s so important to this team in every way possible and he’s shown it to everyone so far after he started the season off with a very slow start.
Uncategorized
Recent articles from Joseph Zita