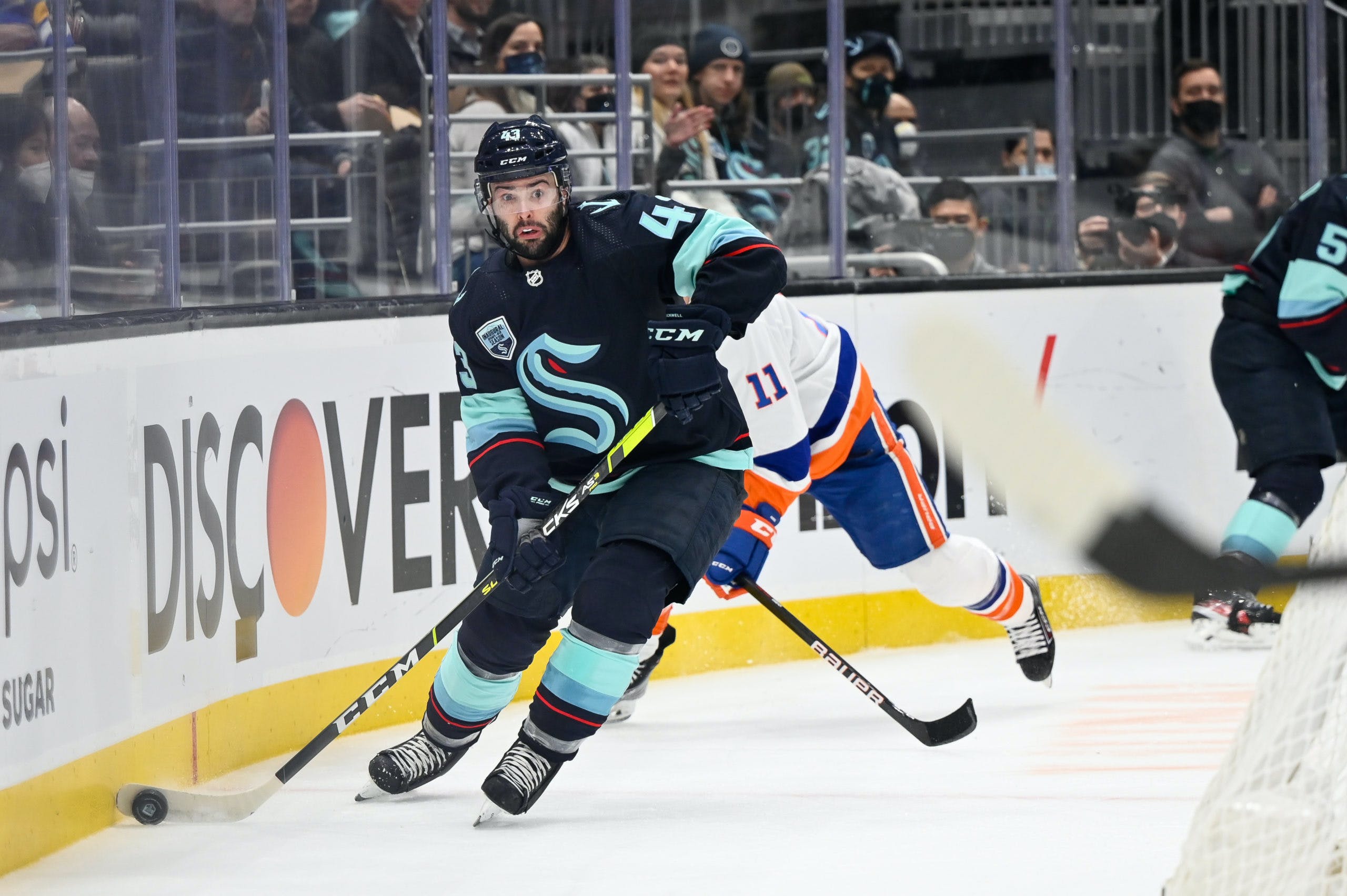 By Nick Richard
8 months ago
The trade deadline has come and gone and the Leafs’ biggest addition, veteran defender Mark Giordano, has drawn most of the headlines.
Everyone knows what Giordano is all about. The 2018-19 Norris winner is in his 16th NHL season and will immediately solidify a Leafs blue line that has dealt with injuries and inconsistent play all season, but it is the player who was acquired alongside him in Colin Blackwell that could provide the Leafs with significant surplus value down the stretch.
Blackwell certainly wasn’t the flashiest name among the forwards moved at the deadline but he has produced at a respectable rate and brings some attributes to the Leafs’ lineup that they have been short on.
Over the last two seasons with the New York Rangers and Seattle Kraken, the energetic Blackwell has scored at an 82 game pace of 19 goals and 18 assists – solid secondary production, especially for a player who carries a cap hit of just $725k.
The Leafs have struggled at times to find offense beyond their big guns and Blackwell should help in that regard but it is his speed and tenacity that will endear him to the Leafs faithful.
“The thing that has really impressed me over the last number of NHL stints with the Rangers, and more so with Seattle this year, is his tenacity and how hard he plays every single game. That was the thing that jumped out, especially when they moved him on to the penalty kill this year and he showed his value there,” said GM Kyle Dubas when asked about the acquisition of Blackwell.
Blackwell is listed at just 5’9″ but he weighs in at 190lbs and is strong on his feet, rarely shying away from contact and often initiating it. The intensity with which he plays the game is only more impressive when you consider the hurdles that he has had to overcome to reach this point.
As a result of head and neck injuries, as well as their lingering effects, Blackwell missed the entire 2013-14 season and most of the 2014-15 season at Harvard. There was even speculation that he might never return to playing competitive hockey but the 2011 seventh-round pick wasn’t going to take “no” for an answer.
Blackwell worked diligently in his recovery and returned for a fifth season at Harvard in 2015-16, playing on a team with current Leaf Alex Kerfoot, but his history of head injuries made the Sharks hesitant to sign him to an entry level contract. Instead, he signed a one-year AHL deal and played his first season of professional hockey for San Jose’s minor league affiliate. He produced just 11 points over 57 games with the Barracuda and San Jose opted to let him walk after the season.
The North Andover native caught on with Rochester on another AHL contract the following season and his production ballooned to 45 points in 61 games. Blackwell was able to parlay that strong campaign into a two-year NHL deal with the Nashville Predators and finally made his NHL debut in 2018-19 at the age of 26.
After bouncing between the NHL and AHL in the Predators’ organization for two seasons, Blackwell signed on with the New York Rangers ahead of the 2020-21 season and enjoyed a breakout season of sorts. He played most of his minutes on a line with Artemi Panarin and Ryan Strome, potting 12 goals and 10 assists over 47 games while showing he could keep up with high-end skilled players.
Nevertheless, the Rangers left him unprotected for the Seattle expansion draft and the Kraken scooped him up ahead of their inaugural season. Through 39 games in 2021-22, he has produced at a similar rate, registering eight goals and nine assists with lesser linemates, and his underlying defensive numbers have improved drastically from what they were a season ago.
Most of Blackwell’s statistical value is derived from his finishing ability. He doesn’t necessarily drive offense at a high level but he has the ability to capitalize on opportunities at a rate well above league average. He has also been a slightly above-average defensive player for much of his NHL career, using his speed to pressure opposing puck carriers and shut down passing lanes in transition.

Now set to turn 29 next week, Blackwell is gearing up for his first NHL playoff games with his new club in Toronto. His versatility and fast-paced style of play will be welcomed additions for head coach Sheldon Keefe as he continues to search for the Leafs’ optimal lineup.
Blackwell appears set to begin his Leafs tenure on a fourth line with Jason Spezza and Wayne Simmonds when the Leafs take on the New Jersey Devils on Wednesday night and he should bring some juice to a unit that has struggled to make a positive impact in recent weeks. It looks like he’ll man a spot on the second powerplay unit as well, at least until Ondřej Kaše returns from his latest absence.
Keefe has also been searching for a way to get more from the duo of John Tavares and William Nylander, and Blackwell’s skill set combined with his experience playing alongside players like Panarin and Strome could make him a viable option on that second line at some point.
Blackwell’s relentlessness and willingness to get in on the forecheck could be just the remedy for what has been ailing that line. There is no debating Tavares’ or Nylander’s offensive abilities but they have had a difficult time sustaining offensive zone pressure. Tavares has never been all that fleet of foot and though he never shows a lack of effort, he isn’t going to be the first guy in to go after a contested puck very often. Speed isn’t a problem for Nylander but even when he is most engaged – which he certainly hasn’t been as of late – he is more of a cerebral presence on the forecheck than a pure puck hound.
Kerfoot has found some success there this season but his effectiveness as the third member of that group has waned as the games have piled up and while he has plenty of speed, he isn’t exactly a disruptive force on the forecheck either.
Kaše and his particular brand of reckless abandonment brought some energy to the Leafs’ second unit but the team was outscored at 5v5 in that trio’s limited stint and Kaše is once again on the shelf with a suspected head injury, adding further questions regarding how much the club will be able to rely on him down the stretch.
Nick Robertson also received a brief look alongside Tavares and Nylander and that group showed some promising signs of life but Robertson has since been reassigned to the Marlies and it seems unlikely that Keefe will want to trust a rookie in such a prominent role when the playoffs begin.
Blackwell may be starting out on the fourth line but his versatility and ability to play up and down the lineup made him attractive to the Leafs.
“The other part is that he is not just a pure energy, run-around, forecheck, pressure kind of player,” said Dubas. “He can also make a lot of plays. He showed that against us earlier in the year. He has that component that lets us move him up and down the lineup.”
Absent an addition of a bonafide top-six scoring winger, Blackwell profiles as a good fit for what the Leafs were looking to address in their forward group and the expectation is that he will be used in a variety of ways once Keefe gains some familiarity with his newest forward.
For the late-blooming Blackwell, this is an opportunity to pad his resume under the bright lights of Toronto as he heads towards the offseason without a contract for next year. For now, though, he is intent on doing everything he can to make his mark as a Leaf.
“Talk about excitement, going to a place a little bit closer to home and an honest opportunity to be a part of something special. Play in the playoffs, and compete for a Stanley Cup, that’s something that somebody in my situation, that’s all you can ever really ask for,” said an obviously excited Blackwell in his first media availability after being acquired by the Leafs.
Blackwell has battled through adversity and fought hard just to make it this far. Now the Leafs are betting that same tenacious work ethic can help push them to greater heights when the games matter most.