The Maple Leafs have pushed their chips in on Nick Foligno. What Does that Mean for the Club? 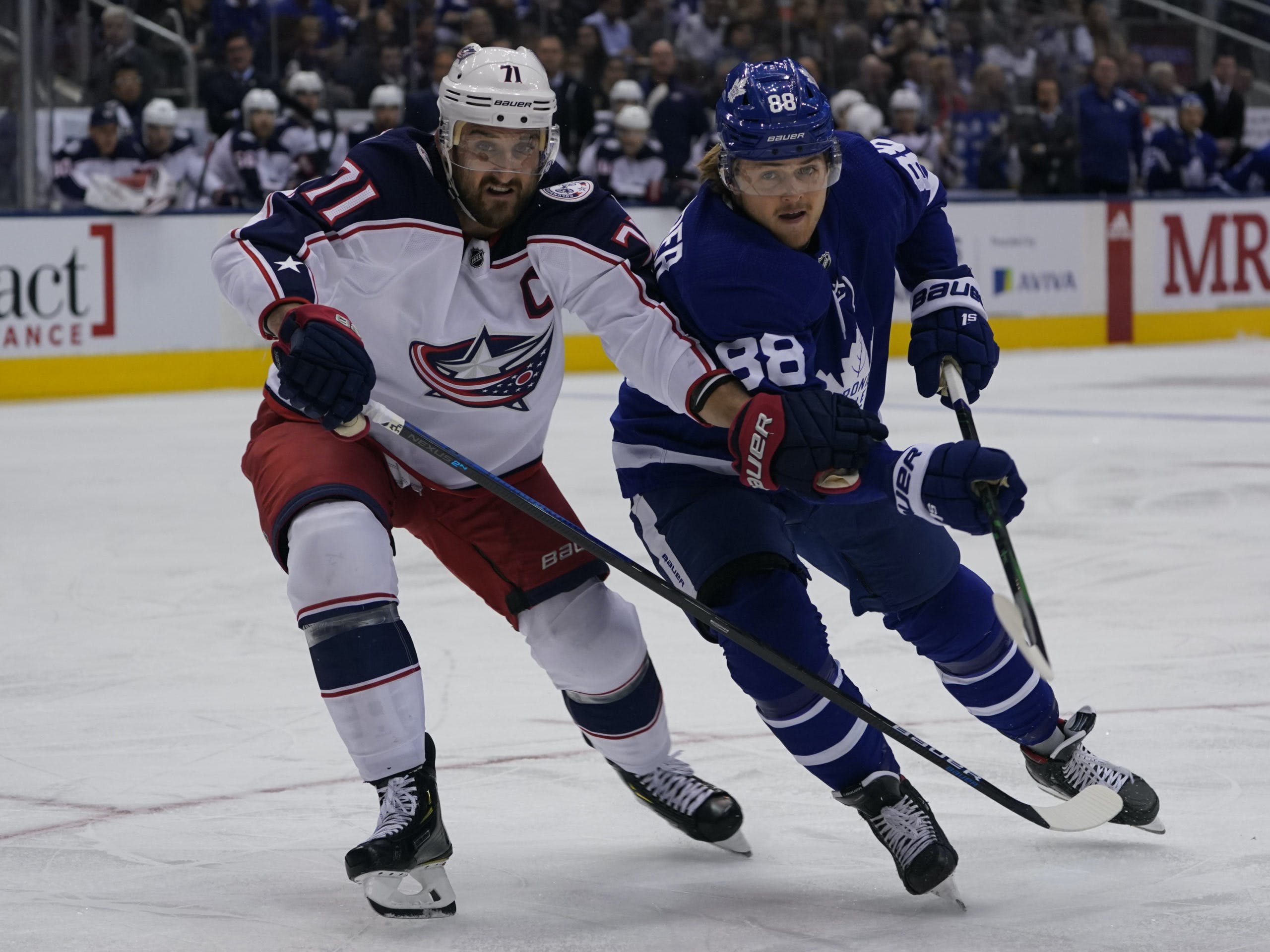 By Jori Negin-Shecter
1 year ago
With the NHL Trade Deadline less than 24 Hours away, Kyle Dubas has made the biggest splash of “silly season” to this point with his acquisition of @Nick Foligno from the Columbus Blue Jackets (alongside @Stefan Noesen from the San Jose Sharks). In exchange, the Maple Leafs will send a first-round pick and a fourth-round pick to Columbus, while also sending a fourth-round pick to San Jose to retain some of Foligno’s salary. As such, with both Columbus and San Jose retain 50% on Nick Foligno’s deal, the Maple Leafs will only be responsible for paying 25% of the salary remaining on the upcoming unrestricted free agent.
Immediate reactions were divisive at best and combative at worst, as paying a first-rounder for Nick Foligno in 2021 appears expensive at a glance. While averaging over 18 minutes a night with the sputtering Columbus Blue Jackets, Foligno has a paltry 16 points, 7 goals and 9 assists, in 42 games played. There’s a lot more to this move than just the boxcar stats, however, and it’s worth trying to understand what the Maple Leafs not only see in Nick Foligno but also perhaps what they are expecting out of him as they attempt to load up for the most highly anticipated postseason of the Big Four era.

Since the Maple Leafs were eliminated last August by the Blue Jackets, much has been made by Kyle Dubas and the rest of Maple Leafs’ management about getting tougher, grittier, and harder to play against. If you watched even a sliver of the Play-In series last August, you’ll be more than aware that Nick Foligno fits that bill very nicely. Ever the hard worker, Foligno will slot into the Maple Leafs’ lineup as another player willing to rough it up while also providing some depth scoring and, more importantly, some further defensive stability on the wing. Since the NHL began tracking the hits stat at the beginning of the 2007-2008 season, Foligno ranks 21st in that category and 11th amongst active players. Despite measuring in at “just” six feet, this guy is not afraid of anyone.
Not everybody is a huge fan of players throwing the body, especially given that it often means you don’t have the puck yourself if you are constantly hitting. So, what do the underlying numbers say about what Foligno will bring?
Nick Foligno will come in and immediately be one of the Maple Leafs’ best defensive forwards. Even amidst his offensive production slipping from the peaks of his 2014-15 campaign, his ability to neutralize the opposition will be a welcome addition to the Maple Leafs’ lineup as playoff hockey draws nearer.

The Cost of Nick Foligno

There are two ways that you can look at the cost of Nick Foligno: The price tag he has remaining on his deal or the cost of the assets it took to make him a Maple Leaf. I’ll defer much of the cap specifics to local Capologist Extraordinaire Earl Schwartz in case there are any shenanigans pertaining to Foligno’s salary changing at the deadline as a pending UFA, however, it appears the Maple Leafs are still going to have some flexibility after this move. With the double 50% retention by the Blue Jackets and Sharks, Foligno’s cap hit for Toronto is down to just $1.375 million (plus the fully buriable $925,000 of Stefan Noesen). This move leaves Kyle Dubas with plenty of space to spare if he’s hoping to make another move in the hours to come. Perhaps the dream of Taylor Hall should not be put on the back burner quite yet, especially if he isn’t even expected to fetch a first-rounder.
On the flip side of the coin, there is of course the elephant in the room that is the asset cost of acquiring Nick Foligno. A first-round Pick is a first-round Pick no matter how you slice it and moving an asset with that much value for a guy that isn’t likely to considerably move the needle in a strong-link sport hurts to a degree. With this in mind, however, there are a couple of caveats that make this year’s draft different from others. Of course, there is the added uncertainty that comes from hockey in a global pandemic. Scouting is limited, players are playing shortened seasons or not playing at all, and it is quite simply harder to get reads on players this season after some spent months away from the rink during prime developmental years.
Even more interesting is that this year’s draft is regarded as the weakest since perhaps the 2012 draft which saw Nail Yakupov, Ryan Murray, and Alex Galchenyuk go 1-2-3 in a pretty forgettable crop. This year, there remains a lot of uncertainty about who the best prospect even is, as about six different players have had their names tossed into the hat as a potential first overall selection, further reinforcing the fact that this year’s draft is simply going to be an even bigger crapshoot than normal. Combined with the fact that draft pick value tends to taper off after 24th overall, and the Maple Leafs are gearing up to draft well after that point, and it gets a lot easier to stomach the eye-catching first rounder we will see in headlines reporting on this deal.

Where Does He Fit?

Much had been made prior to the Nashville Predators’ recent surge about Toronto acquiring Mikael Granlund and slotting him into the top-6 on the left-wing. As such, it is easy to look at Foligno’s similar spot in the Blue Jackets lineup and plunk him beside Tavares and Nylander and call it a day. With a little bit more of a critical eye, however, we can see that perhaps there is a better place for Foligno after he concludes his 7-day mandated quarantine. Before Nylander’s exposure to COVID-19, the trio of Galchenyuk-Tavares-Nylander was clicking like it was nobody’s business. As a line, the group held a 65% share of the expected goals while on the ice per MoneyPuck, and the highest xG rate per 60 amongst Leafs’ lines. That line’s expected goal share is only eclipsed by the trio of Hyman-Matthews-Marner, which ranks as the third-best line by expected goal share in the entire NHL amongst lines with 200 minutes or more together, also per MoneyPuck. The Maple Leafs have pretty clearly found a top-six group that works.
Something that hasn’t worked for the Maple Leafs, at least in the time that we have seen the group together, has been the third line trio (or fourth line depending on who you ask) of Kerfoot-Spezza-Thornton. The line has gotten shelled pretty badly while together, particularly on the defensive side of the puck, allowing almost four expected goals per sixty together per Moneypuck. A shakeup appears necessary to get things moving there, and with Foligno’s defensive prowess and the ageing legs of Joe Thornton, who has been less than impressive since the calendar turned to March, there may be an opportunity for change. Slotting Foligno in and seeing if that new line can find some chemistry and get going would only increase this team’s chance to threaten for a Stanley Cup.
Giving up a first-round pick for a guy on your third line obviously isn’t ideal, however, when it comes to the trade deadline, sometimes you just have to pay what the market is asking for. The Maple Leafs’ goal this year is to end a drought spanning generations, and there cannot be any hesitation from management if the opportunity to improve is presented. As the old saying goes, flags are temporary, but prospects (and picks) fly forever. Or…something like that.
Uncategorized
Recent articles from Jori Negin-Shecter