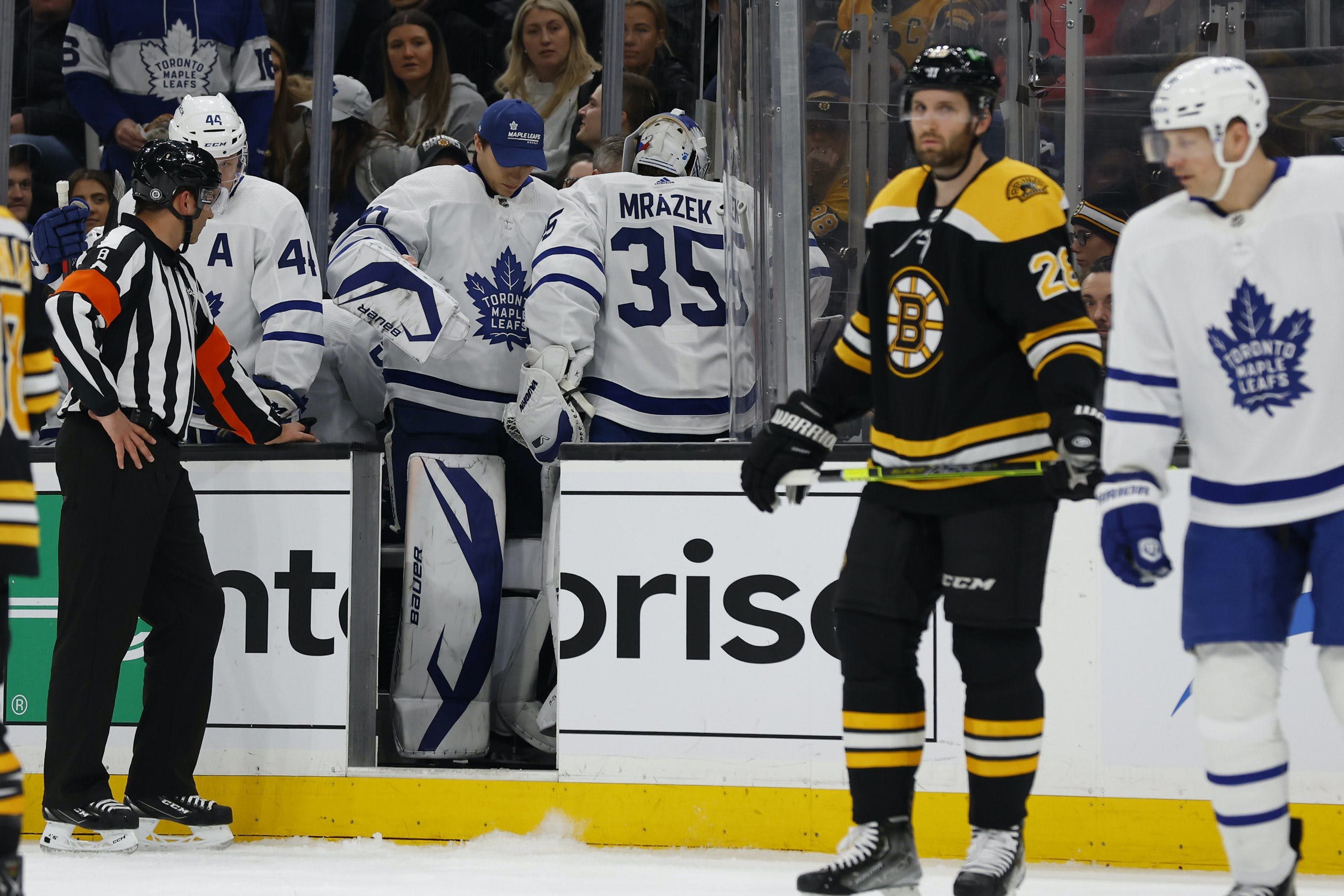 By Nick Barden
8 months ago
After a not-so-stellar first season in Toronto, it seems like Petr Mrazek’s time in the Maple Leafs might already be coming to an end.
The 30-year-old had multiple injuries throughout the season and it felt like he never played a stretch of games with consistency. There were already a few question marks when Maple Leafs GM Kyle Dubas signed Mrazek last off-season.
And while some thought he might be a good fit, there were others who believed this wasn’t the right move.
At 30-years-old, Mrazek is still owed $6 million over the next two seasons by Toronto. That’s a lot of money throughout the course of two years for a goaltender who finished this season with an .888 save percentage.
Many won’t forget that he was even placed on waivers when the Maple Leafs approached the trade deadline this year.
It was supposed to be a tandem between Mrazek and Jack Campbell, but three groin injuries got in the way of that. Now, everyone asks the question — does Toronto trade him?
Do you move out the $3-million AAV goaltender who now has a career save percentage of .909 in the NHL? Do you trade him because he never provided consistent goaltending to the Maple Leafs? Do you trade him because you believe he won’t return to the form he once had?
It’s honestly a tough question to answer.
Mrazek has been known for his stretches of good and bad games, but I’m not sure the inconsistent play fits the mold for a netminder in Toronto.
The most difficult part of all of this is that if Dubas trades him, he’s going to need to go out and find another goaltender to replace him. Now, I know a lot of fans might think one of Joseph Woll or Erik Kallgren are ready to step up, but the grim answer is they’re not.
Both goaltenders have pushed forward over the last season, but I don’t believe the Maple Leafs can rely on one of these two to be a backup in the NHL at the moment.
A lot of Kallgren’s games seemed to be well-played and the 25-year-old even got into part of a game against the Lightning in the playoffs. However, he, like Mrazek, finished off the season with an .888 save percentage and his play wasn’t consistent at all.
In fact, of the 14 games Kallgren played at the NHL level, there were only six where he posted a save percentage above .900. He had sub-900 goaltending in more than half of his NHL starts.
If we’re discussing moving on from Mrazek because of his inconsistent play, why is Kallgren being talked about as the next man up?
Even with Woll, he’s only played four career games in the NHL and finished with a .911 save percentage. While that’s an encouraging number, it’s masked by two good games where he posted a shutout and another where he allowed one goal on 35 shots.
The 23-year-old combined for an .853 save percentage in the other two games he played.
Going into last season, these two netminders were supposed to be the cornerstone goaltenders of the Toronto Marlies — both sharing the net equally. Neither goaltender was supposed to be up in the NHL playing games, but with Mrazek’s injury it became a reality.
Woll will be 24 and Kallgren is going to be 26 once next season begins. And while neither provided me with a sense of belief that they can be consistent NHL goaltenders, there’s always the chance they can be because that position is so unpredictable.
I don’t believe that’s the best way to go about the Maple Leafs’ back-up position, but it may be Toronto’s best choice given the salary cap implications.
When Campbell went down in Game 7, I remember thinking that if Kallgren wanted to establish himself as an NHL-calibre goaltender, this was his chance. Evidently, the Maple Leafs’ starter stayed in the game and they ended up losing, but for a second, that door was open.
If Toronto had moved on to the second round, I believe Kallgen would’ve had a chance to show what he’s capable of. That wasn’t because he was a good goaltender last season, but because he was, really, their only hope.
Maple Leafs head coach Sheldon Keefe wasn’t going to throw Mrazek into Game 1 of the second round after being out for a couple of months. He also wasn’t going to put Michael Hutchinson into a game at that point either, unless he had to.
It was going to be Kallgren’s opportunity.
I still believe that if the Maple Leafs do in fact move Mrazek, there’s still the chance that one of Woll or Kallgren gets the back-up spot. I, personally, don’t like the idea because of their play in the past, but with the influx of goaltenders with the Marlies next season, it seems like a possibility.
Again, though, Toronto isn’t worried about the Marlies goaltenders getting in games. Okay, they likely do, but the Maple Leafs should be doing everything to try and win now.
If you’re looking outside of the organization, a goaltender such as Scott Wedgewood looks to be finding his feet in the NHL. The 29-year-old finished this season with a .910 save percentage over 34 games split between the Arizona Coyotes (26 GP) and the Dallas Stars (8GP).
He’s an option that likely won’t command a lot of money in July. Wedgewood is also native of Brampton, so I’m sure you could bet on him wanting to come home and play in Toronto. Should the Maple Leafs target him?
Either way, whichever path Dubas chooses to go down, it’s going to be interesting. It’s always fascinating in the off-season, but with the goaltender position in question, this summer becomes all-the-more riveting.
(Stats via Hockey-Reference.com and contract values via PuckPedia.com)
More from TheLeafsNation.com
POINTSBET IS LIVE IN ONTARIO