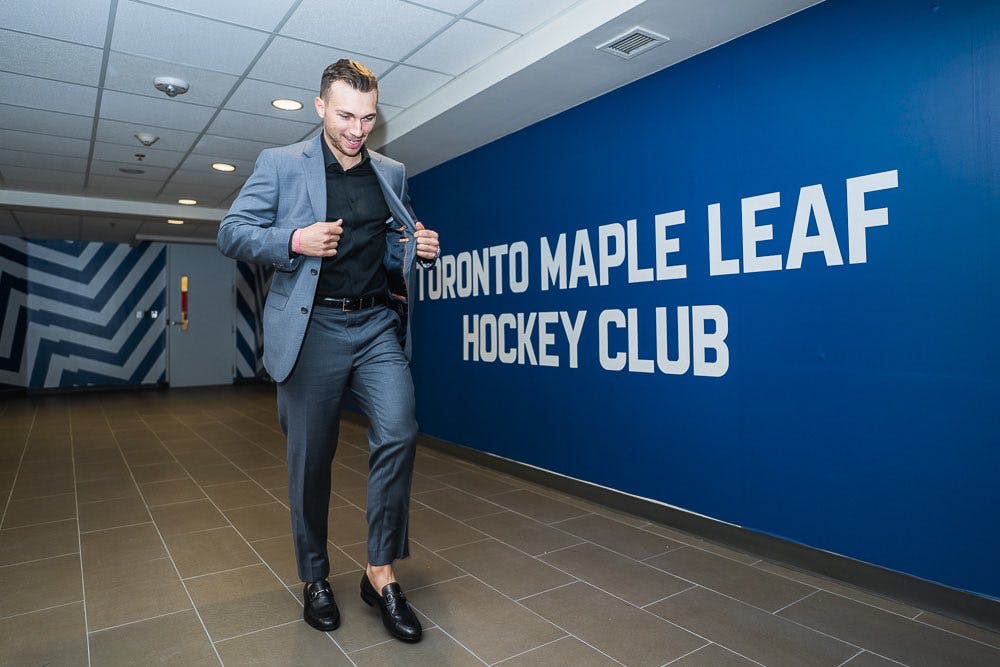 By Nick Barden
3 months ago
It’s that time again where I look at who’s the best and worst dressed on the Maple Leafs and rank them from five to one.
Last Sunday saw the likes of Michael Bunting and Alexander Kerfoot get placed in the ‘needs work‘ category. That should speak for itself. But this week, they came dressed for success, and that catapulted them up the rankings.
There’s no sign of Auston Matthews, Mitch Marner, or William Nylander this week, so there isn’t any for sure picks for first place. However, there are some surprises.
And let’s just say the title of the article speaks for itself.

Holl understood the assignment: simple is special.
It’s not the flashiest suit, it’s not the most colourful, but everything from his coat and pants to his shirt just work so well. Add that together with the loafers and the unbuttoned shirt — a simplistic masterpiece.
I hope there’s more to come from Holl throughout the next few weeks because there’s a big chance he can climb the rankings.

Kerfoot joins Bunting as a redemption ark in this week’s article. But it’s only a mini-redemption ark for the Harvard graduate.
I love the different look after the old man wedding suit we saw in last Sunday’s article. Although this isn’t much better, it’s still a huge positive for Kerfoot.
In all honesty, he would’ve been in the top-three if his pants were blue and his shoes were white. If only, I guess, right?
Kerfoot still moves up and that’s hopefully a good sign for the weeks to come.

I’m a big fan of Chelsea boots and suits paired together. Don’t ask me why, I just do.
And Brodie is entering Scotiabank Arena wearing just that.
The suit is nothing special, honestly. It looks like he’s headed into a wedding (but not as bad as Kerfoot’s last Sunday). But with the slim pickings of photos this week, Brodie somehow finds his way into the top three.
Not too shabby.

Sandin jumps up two spots on this week’s rankings and it might only be because there are no photos of Matthews, Marner, or Mark Giordano.
(If you missed last Sunday’s article, you have to read it and see Giordano’s drip, because it is immaculate.)
The 22-year-old is coming into Scotiabank Arena with a similar look to the photo I used last Sunday. This week, it’s a very nice blue suit with a white shirt and white shoes. Although he is wearing socks, they are funky enough that I’ll let it slide this week.
Everything about this look is good and Sandin has earned second spot in this Sunday’s rankings.

Wow. I know, right? First place!
Bunting came into the arena looking confident, and with a suit like this one, I don’t blame him for feeling that way. This looks good.
Much better than last week’s mishmash.
The grey suit paired with the black shirt and loafers: a success. But what ties it all together is Bunting’s decision to wear no socks, or at least ankle socks.
You cannot forget about the unbuttoned shirt.
He jumped from worst to best within one week. I look forward to him doing the same next week, the week after that, and the week after that. I expect he’ll be going up and down forever.
(All photos courtesy of the Maple Leafs’ Twitter and Instagram accounts.)
Editorials
Recent articles from Nick Barden