The optimal lineup for the Maple Leafs heading into the playoffs 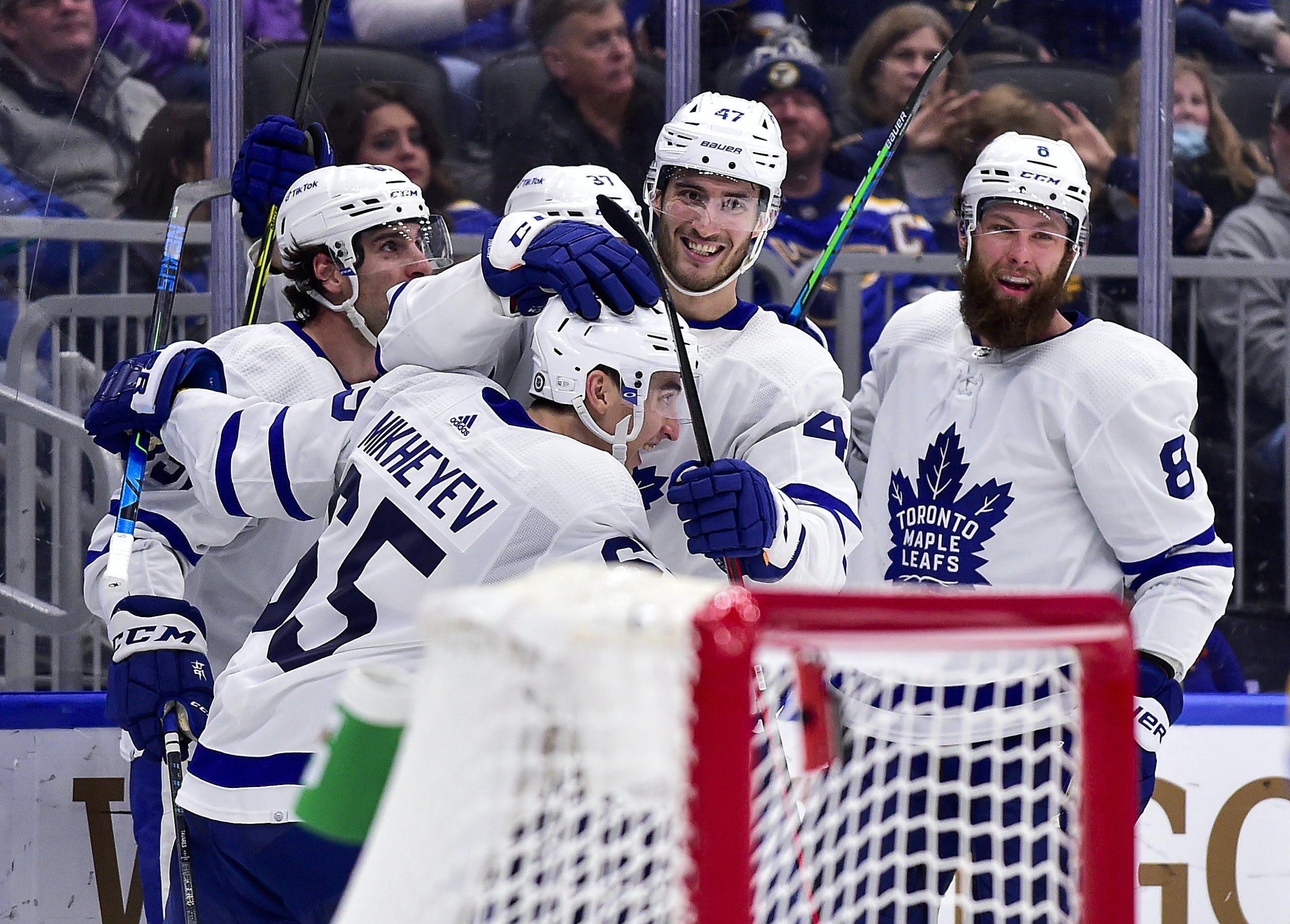 By Nick Barden
7 months ago
One game remaining until the NHL playoffs begin, are you ready?
With a final game against the Boston Bruins, it allows the Maple Leafs to do a lot of things like gain an extra two points and help Mitch Marner hit the 100-point mark for the first time in his career.
It will also let Maple Leafs head coach Sheldon Keefe to tinker with his lines one last time before game one against the Tampa Bay Lightning. Instead of waiting one more game to see what Keefe does with the lineup, I’m going to discuss what Toronto’s optimal lineup should look like ahead of their first round matchup.
The Maple Leafs have tried a number of scenarios with their forward group this season and so they should. There can be injuries that occur at any point and the team wants to know who works with who beforehand so they’re not piecing it together on the fly.
But if I had to pick, how would I design the lines for the first round against the defending Stanley Cup champions?

This is — by far — Toronto’s best line this season and with Bunting hopeful to be ready for the playoffs, this has to be the Maple Leafs’ top line.
Bunting, Matthews, and Marner combined for 55 goals at five-on-five this season, finishing off the year with an expected goals-for percentage of 65.73. The three make up one of the best lines in the NHL, both in the offensive and the defensive end. Put together, this line has the perfect combination of physicality, defensive structure, and goal scoring.
There isn’t one thing this line can’t do.

Although Nylander skated with David Kampf and Pierre Engvall on Tuesday night, I still believe this line gives Toronto a good chance to win games. Spreading the wealth around is something smart that Keefe does, but Toronto needs to ice their best lineup possible and I don’t believe Nylander on the third line gives them the best chance to win.
It might sometimes, but not against Tampa.
I’ll admit, this line’s underlying numbers aren’t the fanciest. The three of Tavares, Nylander, and Kerfoot played over 400 minutes together, scoring and allowing 23 goals at five-on-five all season. Their expected goals-for isn’t the best at 52.25%, but when each of these players are at their best, this line is very good.
Tavares is scoring at almost a point-per-game this season, Nylander is having the best season of his career, as is Kerfoot. Along with that, Kerfoot and Tavares’ defensive game will help shut teams down and their transition game will help for a scoring chance going the other way.

With a healthy lineup, Ondrej Kase would insert into Pierre Engvall’s spot, but without him in the Maple Leafs’ lineup, this is what we’re working with.

Michael Bunting skates but will not play this week for Maple Leafs, Jake Muzzin returns Tuesday against Red Wings

This line won’t give you a lot of goals but it also won’t allow many goals against either. At five-on-five this season, Toronto’s third line has put together an expected goals-for of 66.08%. They’re shooting at 3.45% this season at five-on-five and have a CF%, SCF%, and HDCF% all over 60%.
Each of the three players provide a lot of very good defence and at times can even provide you with an important goal.

Of all the lines Toronto has, this may be the most disappointing of the four. Both Jason Spezza and Wayne Simmonds haven’t played up to their level as of late, which puts a damper on how good this line could be. Colin Blackwell has been a great addition for the Maple Leafs and I believe that if Kase returns, it’ll be one of Spezza or Simmonds on the outside looking in.
The first series against Tampa is going to be grueling, so it’ll be important to switch up the line between games to allow the older players some rest.
If Spezza and Simmonds can return to the form they had earlier in the season, then this line could be a secret weapon in the playoffs. But the other side of the sword shows that this line could also be the downfall of the Maple Leafs.
You might be wondering where Nick Robertson is, and well, I believe there are a lot more impactful players on this team right now. I believe the 20-year-old is good enough, but he fits better in the top-six so unless there’s an injury I don’t believe he’ll play.

I decided to clump the defence pairs into one big lineup because it’s a lot more easier this way.
I’ve placed Morgan Rielly with Ilya Lyubushkin because their underlying numbers are almost exactly the same as the Rielly-T.J. Brodie pairing. That being the top pairing means you can shelter Jake Muzzin with a player you’re confident in with Brodie. It’s either Muzzin-Brodie or Muzzin with Justin Holl and I could guess which one you’d prefer.
Finally, you need to have Mark Giordano alongside Timothy Liljegren. The two have been unstoppable as a pair and I wouldn’t split this up for any other player on the Maple Leafs, including Rasmus Sandin. If I had to decide who’d be the next man up for Toronto if a defenceman got injured, it would be Sandin just based on the numbers with Liljegren.
I’m sure that there would be more tinkering from Keefe if that was the case, but putting Giordano with Brodie would be much better than Sandin-Brodie when you look at the numbers. The pair of Giordano-Brodie at five-on-five have an expected goals-for percentage of 55.37, while the Sandin-Brodie pairing has an xGF% of 33.15.
Once you place Giordano with Brodie and Sandin with Liljegren, I believe you’re set for the next optimal defence lineup if a player (like Muzzin) goes down. Then, if needed, you play Justin Holl.

There should be no debate about this. At all.
Each of these trios and pairs can be switched up at any time, and I’m sure that in the playoffs, anything that Keefe puts together could work. And if things aren’t working, expect the line blender to come out really quick.
It’s realistically going to be a chess match between Keefe and Jon Cooper. I’ve heard Cooper is pretty good, though.
We know more about the defence pairings than the forward lines, so if there are any changes needed, it’ll come from the 12 players up front before the six in behind.
But to me, this is the lineup that’ll give the Maple Leafs the best chance to win in the first round and beyond.
(Statistics via NaturalStatTrick.com)
More from TheLeafsNation.com
POINTSBET IS LIVE IN ONTARIO