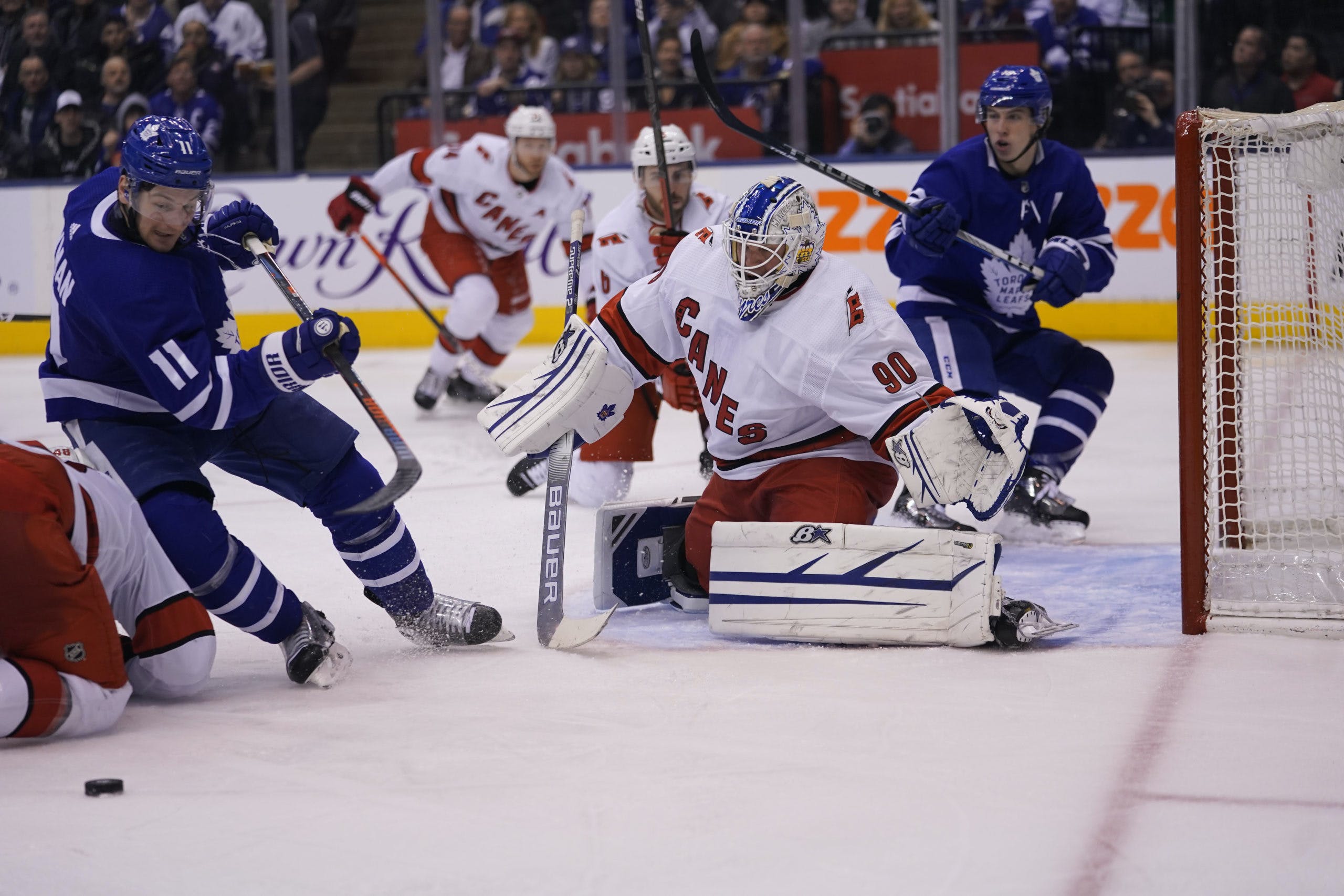 By Michael Mazzei
2 years ago
Hey, remember that time the Leafs lost to a 42-year-old Zamboni driver who worked for the team? The Carolina Hurricanes don’t want you to forget since they keep bringing it up on their social media pages once a month. While that was an inspiring story for David Ayres during his 15 minutes of fame, it’s a night that the Leafs would like to forget but can’t.
In the months that have followed that game, @Martin Marincin scored a goal, a global pandemic started, some kid named @Nicholas Robertson made his NHL debut, and the Leafs lost in the first round yet again. Judging by all of the moves made since the Blue Jackets forced them to travel fifteen minutes back to their real homes, it’s evident that Kyle Dubas and company were not pleased with the makeup of the roster and wanted to make some changes.
One of those new additions was @Zach Bogosian, a guy who was bought out by the Sabres and went on to win the Stanley Cup with the Lightning. The last part almost did not happen because the Leafs had some interest in him around the time he was released from Buffalo. But the exact reason why he went to Tampa Bay instead of Toronto wasn’t made apparent around the time of the signing.
In Elliotte Friedman’s latest edition of 31 Thoughts, we got our answer. Bogosian went on Friedman’s 31 Thoughts podcast and revealed this interesting nugget:

25. On the 31 Thoughts podcast, Zach Bogosian confirmed that he was 12 hours away from a face-to-face meeting with the Maple Leafs when David Ayres happened. GM Kyle Dubas cancelled, saying it made more sense to go with youth than veterans after that result. It was a tough time for Bogosian, cut by Buffalo and looking for a new job. Boy, did he land on his feet.
“I learned a lot in the last year,” he said. “You can be at your lowest of lows… and finish off in the highest of highs.” He had at least one larger offer out there (I think New Jersey), but chose Toronto.

So let me get this straight. Is Ayres the reason the Lightning won the 2020 Stanley Cup? They should erect his statue in front of Amalie Arena as soon as possible!
Jokes aside, this helps make the rationale behind some decisions (or lack thereof) that the Leafs made around the 2020 trade deadline more transparent.
You may recall that there were rumours emerging that @Tyson Barrie could have been on the move at the deadline but remained a Leaf once the clock struck 3 p.m. on February 24th. Dubas told Barrie around that time that he had faith in his team which is why he wasn’t dealt and why the only real move Toronto made was bringing back @Calle Rosen.
Now that Bogosain revealed he was close to meeting with the Leafs but didn’t because of the David Ayres game, then that likely means Barrie wasn’t moved for the same reason. It’s fair to assume that Dubas watched that game and realized that the roster was not good enough to compete for a Cup (or even advance past the first round) and the focus should instead be on how to get better in 2020-21. That might explain why Rosen was the only significant addition to the Leafs at the deadline rather than getting more immediate help (Ex: Bogosian).
I also don’t think that the Ayres game was the sole reason for Dubas shifting his focus for the 2020 offseason. The signs had been there throughout the year, even after the Leafs fired Mike Babcock and replaced him with Sheldon Keefe. Like the aftermath of that Penguins game back in November, losing to Ayres and the Hurricanes on HNIC was the straw that broke the camel’s back and helped validate management’s decision to change course on the season. Let me put it this way; the team that went into the bubble was essentially the same group that only managed to put two goals past a Zamboni driver.
The lack of a major move at the deadline was essentially Dubas’ way of telling the players “I am not getting you help to escape from this mess. Figure it out on your own.”
This was not obvious at the time since the Leafs did not make any major transactions, but the first few days of free agency are making it much more definitive. From the first move of handing Kasperi Kapanen back to the Penguins to the rumours of Joe Thornton coming home, Dubas has completely transformed the makeup of the lineup in an attempt to avoid the same mistakes from the 2019-20 season.
For context, here’s what my boss, Jon Steitzer, said about the state of Leafs on the night of that infamous game:

As for the Leafs, the amount of shame that should exist in this organization can’t be measured. All they really needed to do was shoot. They didn’t. All they needed to do was look like a quarter of the team they were on Thursday night, they were barely the Tuesday night Leafs. While the stakes might not have been as high, this is right up there with allowing a 4-1 comeback by the Bruins in Game 7. This is something good teams don’t do. And actually, the Leafs aren’t good. They can be, but work needs to be done before that happens.
Considering that we are less than 48 hours from the trade deadline, it’s not a bad time to start overhauling the roster, which clearly has problems.

Given that five members (and counting) of the Leafs roster from last season have now left either due to trade or free agency, the overhaul of the roster is now in full flight.
Shifting our attention back to Bogosian for a moment, Leafs fans will definitely be pleased to know that Dubas was looking for ways to improve the roster in the days leading up to the deadline. While Bogosian isn’t a player that will make an impact on the score sheet, the other aspects of his game such as his tenacious playstyle and penalty-killing abilities help out a ton. The major addition was already made with the acquisition of @Jack Campbell and @Kyle Clifford so who knows if the Leafs had any other big upgrades in mind.
While we can ponder about what could have been in an alternate universe that has the Leafs winning the Cup every year, the reality is that the Ayres game was significant beyond spawning a joke. It likely made Dubas realize that his team needed to be retooled, especially given that there was a very real chance the Leafs could have missed the playoffs had the season played out as originally intended. It put Bogosian on a path that ended with him hoisting Lord Stanley’s trophy in Edmonton. It’s gotten us to this point now, arguing whether the Leafs should trade @Justin Holl or @Travis Dermott for @Mackenzie Weegar.
Nearly eight months after experiencing one of the most embarrassing moments in franchise history, the ripple effects from that night are starting to become more clear.
Uncategorized
Recent articles from Michael Mazzei