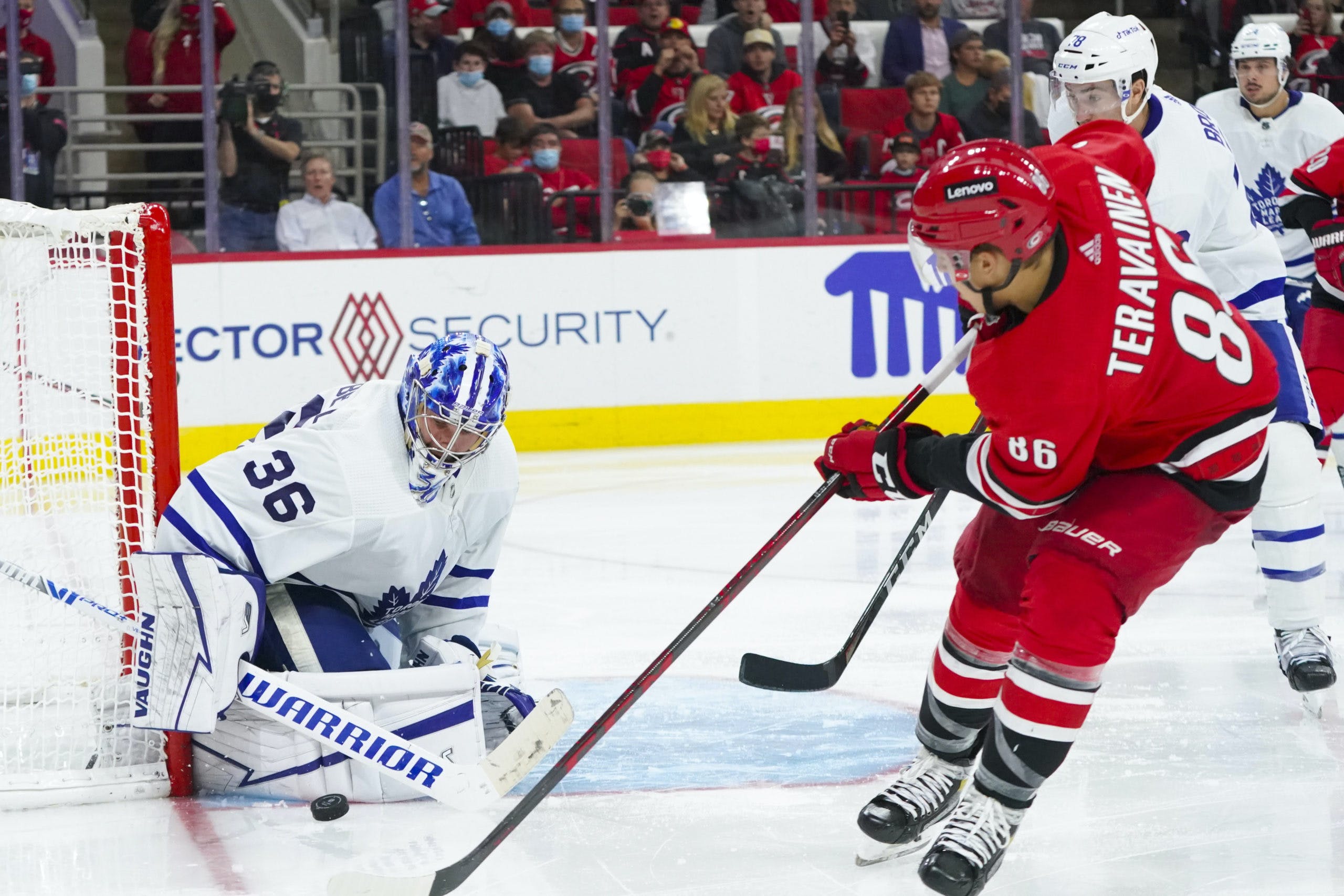 By Roxanne Khasow
1 year ago
New week, new mindset, new team, right? Not exactly. Coming off a rough 7-1 loss against the Pittsburgh Penguins on Saturday night, the Toronto Maple Leafs were looking for redemption, and to finally bring an end to their losing streak. As the puck dropped against the Carolina Hurricanes, it looked like the Leafs were ready to go. An early goal by Auston Matthews gave us a promising start, but ye olde second period brought a multitude of problems. The Leafs struggled to get pucks to the net and had 0 shots on goal during a power play early in the period. Then it happened… Sebastian Aho opened the scoring for the Hurricanes, which was followed by two additional goals by Steven Lorentz and Nino Niederreiter. The third period looked a little better for the Leafs, but they were still unable to convert. Campbell left the net with the hopes that an additional Leaf would bring some much needed pressure on the ice, but Andrei Svechnikov had other plans as he scored the final goal of the night, making it 4-1, and another game lost by the Leafs.
Three Stars
3rd Star: The Fans
Yes, you. The dedicated and loyal fans of the Toronto Maple Leafs. I truly couldn’t think of a Leaf to take this place so it’s you. You’ve stood by this team through the absolute worst of times, and some of the best of times, and you’re still here. I commend you for still cheering for the Leafs when it can sometimes be …difficult, to say the least. I know we’re still at the beginning of the season, but let’s be real, it’s frustrating. Keep cheering, and keep up the faith, we’ll get there eventually.
A little reminder to stay positive:
2nd Star: Auston Matthews
With the lone goal of the night I felt that it was only right that Matthews is somewhere on the list tonight. Matthews’ goal had the boys buzzing in the first period and truly changed the energy and demeanour of their play on ice. And, Auston Matthews’ goal tonight was a little special, it was his 200th career goal in 338 games played, and to boot, it was against his friend Frederik Andersen. This is really just your daily reminder that Auston Matthews is a Toronto Maple Leaf.
1st Star: Jack Campbell
Listen, I know the Leafs lost. But Campbell still played his heart out for this team. The Hurricanes had a lot of good chances on net and if Campbell wasn’t on his game, the final score could have easily been a repeat of Saturday’s game. Tonight, Campbell saw a total of 35 SOG and let in 3 goals, one of which was a sneaky tip-in. He ended the night with a SV% of .914. Not the best night, but it could have been worse.
40th Star: Leafs’ Power Play
I really thought we left this problem in the last season, but here we are again. A tale as old as time, a struggling Leafs power play. In all honestly, I don’t know what else this team needs to do. They shouldn’t be struggling to even get a shot on net when they have a one man advantage, but that’s exactly how it went tonight. The Leafs saw a total of 3 power plays and weren’t able to get a puck in the net. What’s lacking, chemistry, energy, a desire to actually win? Who knows. (What’s next, do we put the power play in rice? I have no idea.)
Tweet of the Night:
This is the One Direction and Toronto Maple Leafs collab that I didn’t know I needed. We still love you Freddy.
What’s Next?
The Leafs continue on the road and they look ahead as they take on the Chicago Blackhawks at the United Center at 7:30PM on Wednesday night. If you aren’t fed up by now, catch the action on Sportsnet.
Uncategorized
Recent articles from Roxanne Khasow