Three Marlies that could help the Maple Leafs in the playoffs 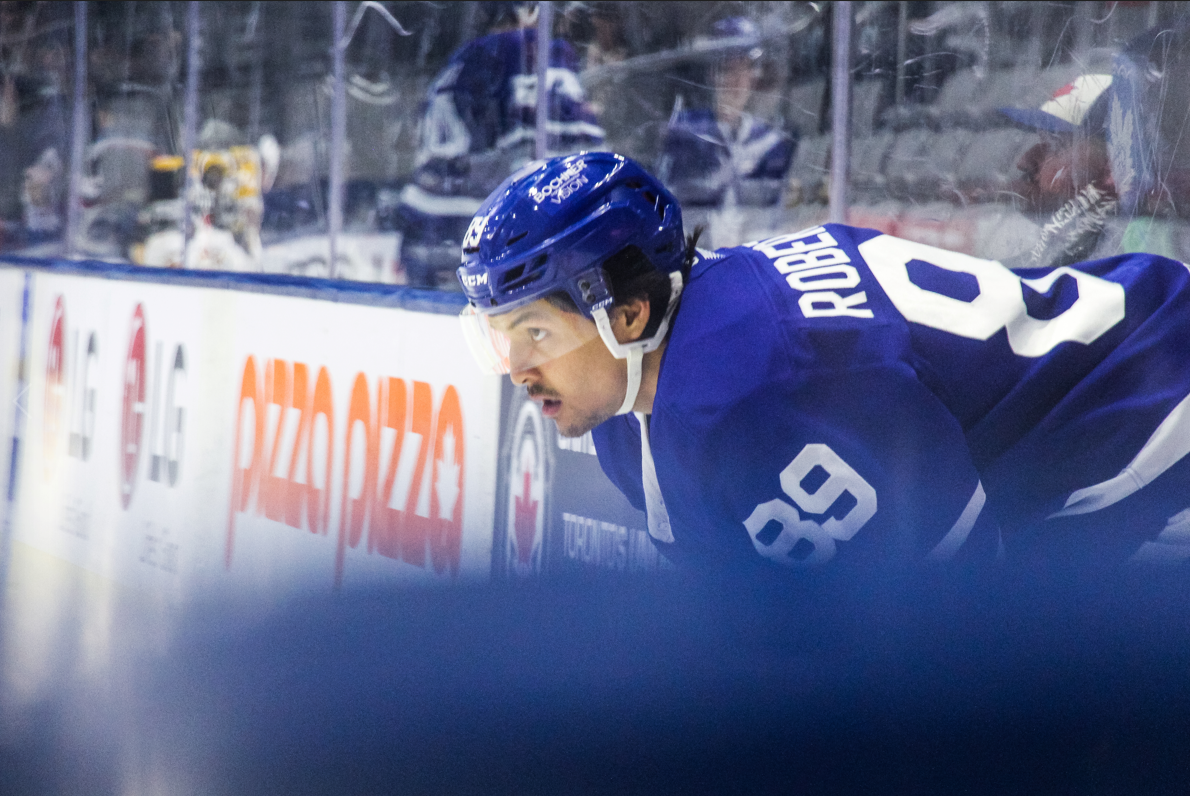 By Nick Barden
7 months ago
There’s no shortage of Maple Leafs prospects on the Marlies, but which ones can make a difference at the NHL level?
Both teams are in a playoff race of their own with the Leafs looking to secure home-ice advantage in the first round, and the Marlies are looking to secure a playoff spot in general.
As we creep closer and closer to NHL playoffs, there’s a question about who could come up from the Marlies and be used if needed. Now, with the Maple Leafs’ crowded defence core, it pretty much eliminates the chances of Joseph Duszak, Kristians Rubins, or any other defenceman coming up, unless an injury occurs.
It’s a different story with the forward group, though.
There are a number of combinations that you could use on the Maple Leafs’ fourth line and it might be normal to see players like Jason Spezza and Wayne Simmonds come in and out of the lineup. The only mainstay on that line right now is Colin Blackwell, in my opinion, just because of the consistency he brings every night.
Toronto also has Kyle Clifford, but at times, the only thing he brings to the lineup is toughness. And while you’d like that in some instances, you’re going to need goal-scoring too.
So, I thought I’d put together a list of players from the Marlies that the Maple Leafs could use once they start the playoffs.

Robertson’s play has been stellar ever since he returned to the Marlies lineup back in February.
One thing you notice is the amount of confidence in his game this year compared to his first season in the AHL. He’s taken it up a notch for sure.
The 20-year-old is averaging just over a point-per-game over the 24 games he’s played this season. He has 14 goals over the 24-game span.
“It’s high,” said Robertson of his confidence currently with the Marlies. “It’s a lot higher than it was last year and playing the games in the NHL, too, I think that enhanced my confidence and what I can do in this level in the American League.”
If there’s one player that should get the call-up first, I’d say it should be Robertson. There’s many reasons why I think this, but the biggest is because he’s experienced the NHL playoffs before, even if you do want to call it the play-in.
Plus, Robertson can be a scary player to come up against with the confidence he has right now. It would be interesting to see what he could do with that confidence in the NHL.
Playoff potential: LW on any of the Maple Leafs’ four lines

When Steeves played his first few games in the AHL, you knew there was something there.
Everything about his game speaks NHL potential and at this point of the season, I think he’s earned another look with the Maple Leafs. But I don’t think that happens with the Marlies being in a playoff race of their own.
So, that means we’ll have to wait until he gets the call up, whenever that happens.
Steeves is having an incredible rookie season in the AHL, putting up 22 goals and 23 assists in 53 games. His 22 goals (tied with Bobby McMann) puts him one shy of the Marlies rookie goal record of 23.
It’s not just the goal-scoring that Steeves has in his repertoire. He’d bring a lot more to the Maple Leafs lineup than just being able to put the puck into the net.
“We’re talking a lot about how these guys can put the puck in the net. The greater narrative, I think, is just how much they’re (McMann and Steeves) doing away from the puck,” said Marlies head coach Greg Moore. “How much they’re helping the team win in a lot of other areas defensively, special teams, penalty kill, being hard in the d-zone, willingness to block shots. There’s a lot of offense coming from those guys, but there’s a lot more that those guys are capable of and they’re a big part of our team.”
Playoff potential: LW or RW on any of the Maple Leafs’ four lines

If there’s any player that breathes consistency, it’s Seney.
The 26-year-old has gone up, come back down, been injured at points, and has never missed a beat with the Marlies. Seney has a stellar 55 points over a 57-game span this season and has been a massive part of the Maple Leafs’ AHL club.
Seney plays in all situations with the Marlies — power play, penalty kill, the extra attacker — you name it, he’s playing it. There’s an argument to say that he’s been the Marlies’ most-valuable-player this season and with that title, he deserves a call-up, if needed by the Maple Leafs in the playoffs.
If there was a chance for Seney to play, I think he’d be behind Steeves and Robertson, just because of the mystery that the two bring if they’re placed in the Maple Leafs’ top-six.
The good thing about Seney is that he can play either left-wing or centre, which actually might give him the edge if Toronto needs a fourth line player to give them a boost.
Playoff potential: LW or C on the fourth line

Realistically, you can add Anderson to this list of names too.
The 23-year-old returned to the Marlies lineup on Wednesday night and looked like his usual self — being a great playmaker and very good defensively.
Anderson has warranted a call-up many times this season, but I’ve felt that he never got a true opportunity to try and stick. If the Marlies miss the playoffs, the 23-year-old will be another big depth piece for Toronto in the NHL.
Playoff potential: RW on the fourth line
More from TheLeafsNation.com
POINTSBET IS LIVE IN ONTARIO